Industry still has concerns regarding the safety and security of vessels, and their crew engaging in trade, says Intercargo chairman 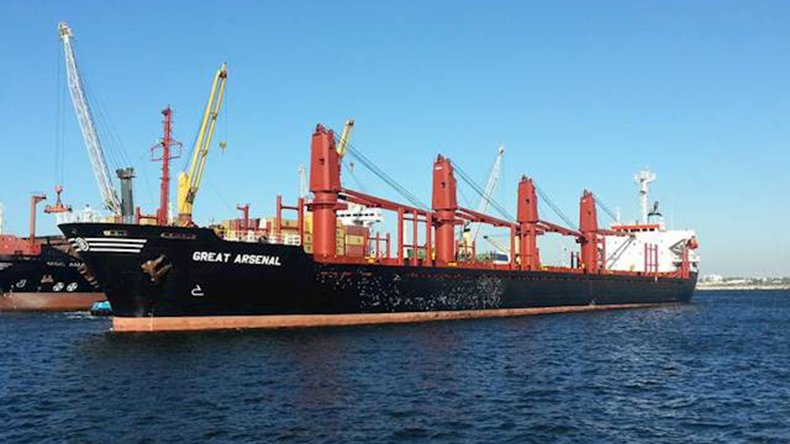 MORE ships have been allowed to move Ukrainian agriculture products out of the war-torn country as the operations are anticipated to gather pace.

The Joint Coordination Centre, which was set up in Istanbul under the Black Sea Grain Initiative, said it has authorised the movement of six inbound vessels via the maritime humanitarian corridor.

Two small general cargoships — Kafkametler (IMO: 9001112) and Zelek Star (IMO: 9379117) — were inspected at Marmara Sea on August 14 and cleared to head out to Chornomorsk in Ukraine, according to the statement.

Lloyd’s List Intelligence data shows that they have entered the Black Sea and are expected to arrive at the port in August 16 and August 17, respectively.

The duo will be followed by two vintage handysize bulkers — Great Arsenal (IMO: 9159062) and Ocean S (IMO: 9086320) — and one small chemical and oil tanker Zumrut Ana (IMO: 9633549), which are all being inspected and pending clearance for the same destination.

The four ships are now at anchor off Istanbul on the south bank of the Bosporus Strait, Lloyd’s List Intelligence data shows.

The first ship is sailing through the Aegean Sea and expected to arrive in Greece’s Piraeus port on August 16, while the second is in the Nemrut Bay Anchorage near Türkiye’s Aliaga port.

“As per procedures agreed at the JCC, all participants coordinate with their respective military and other relevant authorities to ensure the safe passage of commercial vessels under the Black Sea Grain Initiative,” it said.

The latest approved tonnage is adding to the 12 outbound and four inbound ships already cleared by the authorities since the operation started in late July. The first vessel left Odesa on August 1.

Frederick J Kenney Jr, interim coordinator for the United Nations at the JCC, said last week that more shipowners were making enquiries to move grains from Ukraine, while the country’s deputy infrastructure minister Yuriy Vaskov told Lloyd’s List that the shipping volume will reach 3m tonnes per month by September.

Some, however, remain concerned about the operational safety involving the trade seen critical in providing the much-needed food supply to many parts of the world, including Africa.

JCC sees surge in inquiries to ship grains from Ukraine

A dozen ships have left Ukraine so far and four have been authorised to enter in the two weeks that the corridor has been operational. ‘It’s been a good start,’ said the Istanbul-based Joint Coordination Centre’s interim head

“We welcome the recent moves to resume grain shipments from the area,” said Intercargo chairman Dimitrios Fafalios. “But amid the very public discussions regarding insurance and chartering, it must be stressed that the safety and security of the vessels, and their crews, must be at the heart of the debate.

“Practically, this means that there must be concrete assurances at berths and anchorages in Ukrainian ports as to the safety of vessels and their crews, the security of cargoes, and that shipping in the area is free from attack. The creation of a mine-free sea corridor protected by naval escort is essential.”

The remarks come as Ukraine remains engaged in heated battles against Russian to defend its territory, with the war’s centre of gravity appearing to be shifting to the country's south in recent days.

Kiev is attempting to retake the Kherson region, about 200 km away from Odesa, home to Ukraine’s largest port, while heavy Russian shelling reportedly continued along the occupied line of defense over the weekend.

In the city of Mykolaiv, which is even closer to the port city, residential areas and port infrastructure were bombarded, and communication lines and industrial facilities were damaged, according to Ukraine’s Operational Command South.

Meanwhile, the potential that importers might reject the delivery of delayed or damaged cargo is creating additional uncertainties.

A spokesperson from Hong Kong-listed Pacific Basin, a handysize and supramax dry bulker specialist, said the company was still evaluating the situation before any moves to embark on shipping the Ukrainian grains.

Its chief executive Martin Fruergaard recently told Lloyd’s List that it was taking a wait-and-see approach with concerns about the safety of the operations.

An executive from a major state-owned Chinese operator expressed a similar view. “We are quite risk-averse,” said the person.

JCC sees surge in inquiries to ship grains from Ukraine