Razoni not entered with any International Group of P&I Clubs affiliate, say sources

Unsold corn consignment analysed in late May and judged sound, with repeat fumigation as a precautionary measure 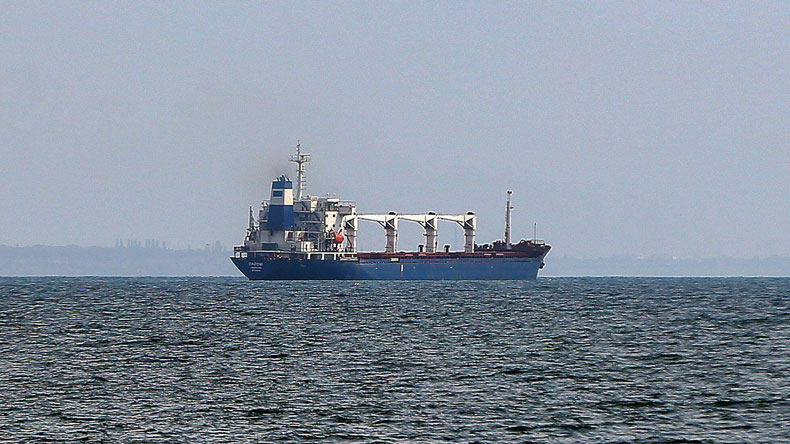 THE elderly bulk carrier charged with moving the first grain export shipment from Ukraine since the Russian invasion appears to be uninsured for either hull war risk or cargo risk, at least in the London market.

The likely cost of such policies was frequently discussed earlier in the crisis as a potential disincentive for owners to accept charters ex Ukraine, which are regarded as essential to avert food crisis in much of North Africa and the Middle East.

While it is entirely legal to sail without either cover, the decision to do so indicates a high degree of risk appetite on the part of the Monrovia accommodation address brass plate company that is the registered owner of the ship.

Additionally, it is also unclear what arrangements Razoni (IMO: 9086526) has in place for P&I cover, which is a legal requirement to trade.

The vessel is understood not to be entered with any of the 13 International Group P&I clubs, which collectively cover 90% of the world fleet, and will presumably have taken out fixed premium cover elsewhere.

Razoni’s cargo of 26,000 tonnes of corn has been rejected by its original Lebanese buyer on the grounds that too much time has elapsed since the deal was concluded. An alternative buyer is now actively being sought.

According to data from Lloyd’s List Intelligence, the ship was at the time of writing alongside at Mersin anchorage in Türkiye after leaving Odesa on August 1. It had been due to dock in Tripoli on August 7.

It was the first ship to leave Ukraine under the humanitarian agreement brokered by Türkiye and the United Nations last month.

A shipping agent in Lebanon commented: “I managed to speak to the charterer, who also owns the cargo, and I understand that the Lebanese buyer rejected the cargo as it was loaded onboard five months ago, and the latter fears damage to cargo.

“The charterer said that the cargo is already sold to Turkish interests and the vessel would discharge at Mersin.”

Odesa-based shipping agency Eurogal confirmed that the cargo had been analysed after having been in storage for a longer than usual period and had been found to be in sound condition. Repeat fumigation took place on May 24, as a precautionary measure.

London market sources told Lloyd’s List that in terms of war risk, Razoni ‘self-insured’, which is to say that it did not take out war risk cover.

The 1996-built handysize — listed on the Lloyd's List Intelligence ownership database as managed by Razoni Shipping Limited, based in the Tuzla suburb of Istanbul, Türkiye, with no telephone number or email address available — has a market value of $5.3m, according to VesselsValue.com.

With war risk cover currently quoted in London at the ballpark rate of 2% of hull value or less, hull cover could probably have been procured for $100,000 or less, had the owner been so minded.

The first shipment from Ukraine is in limbo because the Lebanese buyer rejected the cargo on grounds that too much time has elapsed, while two more vessels have been authorised to depart Chornomorsk port carrying 70,020 tonnes of corn and sunflower meal en route to South Korea and Türkiye

Expectations are that rates will drop once the blue corridor is firmly established, giving underwriters more data on which to quote and the reassurance that the scheme is working more or less as planned.

Yesterday’s closing price for corn on Chicago Board of Trade current futures contracts was $61.55 a bushel, or $242.31 a tonne. That makes Razoni’s consignment worth a fraction over $6.3m, which is more than the value of the ship.

Conventional cargo cover is again widely available, while Ascot is writing a $50m war cargo facility brokered by Marsh. But Ascot’s Chris Gill told the Financial Times in an interview today that this facility has yet to underwrite any vessels.

Two separate underwriters at big name insurers said that to the best of their knowledge, no cover for Razoni’s cargo had been placed in London.

One of them commented in an email: “There is no cargo cover that we are aware of in the London market. Delivery delays would be very unlikely to be covered by a war policy. A conventional cargo policy might respond, but nobody is aware that it was insured.”

Meanwhile, a search for Razoni on the International Group of P&I Clubs’ publicly available database — which is usually kept up to date by affiliates — returns ‘no results found’.

P&I cover is available outside the IG on a fixed premium basis, albeit typically to a level of cover well below the $2bn provided by the IG pool scheme.

Classification certification is provided by Cyprus-headquartered Dromon Bureau of Shipping, that company confirmed by telephone.

Dromon is not affiliated to the International Association of Classification Societies, and acts as a recognised organisation exclusively for flags of convenience.