A total of 10 ships carrying 305,111 tonnes of foodstuffs from corn to sunflower oil and soya have left or will be leaving Ukraine as part of the humanitarian corridor set up last month

Six more ships are on the way out of Ukrainian ports, carrying 220,543 tonnes of corn, sunflower oil and soya, bound for Italy, China and Türkiye 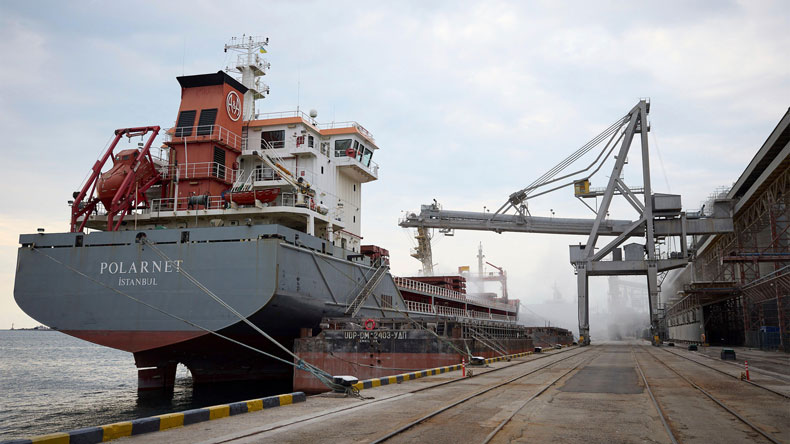 THE export of grain from Ukraine is picking up pace, with six more vessels earmarked for departure.

At least 10 vessels carrying a total of 305,111 tonnes of agricultural products from corn to soya and sunflower oil have left, or are about to leave, ports in the war-torn country since the inception of the Joint Co-ordination Centre in late July.

The deal, brokered by the United Nations and Türkiye, and involving Ukraine and Russia, is designed to allow safe passage of ships through a humanitarian maritime corridor.

Dubbed the Black Sea Grain Initiative, it aims to avert a food crisis after more than 20m tonnes of grain have been stranded in Ukraine due to the Russian incursion in late February, leading to food inflation.

Since August 5, six more vessels, carrying 220,543 tonnes, have been authorised to sail, while one more ship has been cleared to move into Ukraine, according to the Istanbul-based JCC.

The first shipment from Yuzhnyi port, destined for Ravenna in Italy, was due to leave on set to leave on August 8 on the Liberia-flagged general cargoship Sacura (IMO: 9497000) carrying 11,000 tonnes of soya.

The Panama-flagged cargo ship Arizona (IMO: 8103767) is set to depart from Chornomorsk carrying 48,459 tonnes of corn bound for Iskenderun in Türkiye.

“Timings may be affected based on readiness, weather conditions or other unexpected circumstances,” the JCC said in its latest update, adding that inspections are expected to be carried out in Turkish territorial waters as part of the deal.

UPDATED: Three more vessels have left Ukraine carrying a total of 58,000 tonnes of grain to Türkiye, Ireland and the UK, while the first ship to enter Ukraine via the grain corridor is waiting inspection

Over the weekend, four vessels were authorised to sail from Chornomorsk and Odesa carrying 161,084 tonnes of food items in total.

Three other vessels were cleared to leave Ukraine on August 5, with the ships now sailing following inspections.

The first vessel under the agreement — Razoni (IMO: 9086526) — was destined for arrival in Lebanon on August 7 after leaving Odesa on August 1, but looks like it has changed course.

The destination has now changed to Iskenderun having shown another Turkish port, Mersin, earlier today and the vessel is stopped between the two ports, with arrival expected on August 9, according to Lloyd’s List Intelligence. On August 7, the destination had changed to “on order” suggesting the Lebanese buyer has pulled out.

Meanwhile, the JCC said it is “near finalisation” of the shipping procedures to regularise operations to support the implementation of the Black Sea Grain Initiative, which it expects to publish this week.