Nancy Pelosi is back in the US and China will shortly wind down its performative military exercises. But prospects for world shipping — not to mention world peace — hinge on keeping this key trade lane open

The container segment has been in a mess for the past two years, and an additional one-week hiccup in August may look like no big deal. But there are broader issues at stake 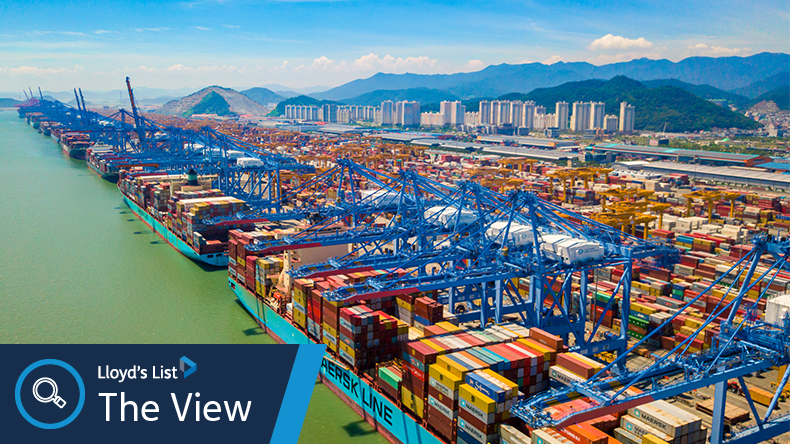 Lloyd’s List Intelligence data confirms no reduction in port calls including at the planet’s seventh-largest container port Busan, following China’s arbitrarily declared closure zones. But if shutdowns were to occur, the repercussions would be serious.

THE main locus of tension in international affairs switched hemispheres this week, with the repercussions of Nancy Pelosi’s flying visit to Taiwan pushing even the good news of the first tentative grain shipments ex-Ukraine out of the headlines.

Opinion is divided as to whether the actions of the House of Representatives speaker constituted courageous moral solidarity with the self-governing island, or a thoughtless and ill-timed intervention designed deliberately to provoke Beijing.

Either way, China’s response was predictable — a performative display of large-scale military drills backed up by missile shots in Taiwanese waters.

This is where the shipping industry comes in.

The Taiwan Strait is a major trade lane, regularly used by ships of all nationalities, exercising their right of innocent passage.

Commercial vessels will be rerouting their journeys around Taiwan until August 7 as China carries out large-scale military drills. The ports of Taiwan are reportedly operating as normal and disruptions are not expected

For any traffic going from Southeast Asia and westward to northern China, South Korea and Japan, it is effectively the main route, avoiding a substantial diversion east of Taiwan. For ships heading from south China to the US, it is the most direct route.

On average, every day sees 240 merchant vessels use the sea areas China arbitrarily declared to be closure zones for the sole purpose of enabling the People’s Liberation Army Navy to display its fearsome prowess.

These are, quite literally, dangerous waters; Lloyd’s List Intelligence was able to track at least three ships that traversed the zones despite being warned of the possible outcome.

There have been other retaliatory measures as well, including sanctions on the Pelosi family, and the suspension of maritime safety talks.

The sceptical take is that all this is no big deal. Container shipping has been in a mess for the past two years, and some will see an additional one-week hiccup in August as an event that hardly merits looking up from your beach reading.

China has no interest in a sustained closure, if only because of the detriment that would be sustained by state-owned Cosco.

But there are broader issues at stake. Domestically, Taiwan is a significant shipping player in its own right, and a free-market capitalist economy built on free trade.

It is home to Evergreen, which sits at number six in the rankings of the largest boxship operators, while Yang Ming is at number nine, constituting an integral part of The Alliance.

The colossal Busan is the planet’s seventh-largest container port, with a throughput that topped 21.8m teu in 2020, while Kaohsiung is listed at 16 in the most recent Lloyd’s List Top 100 listing.

There are no reported port disruptions so far, and LLI data confirms no reduction in port calls. But were they to occur, the repercussions would be serious, not least given Taiwan’s standing as a major manufacturer of the microchips that are so crucial to so many sectors of business.

So far, there has been no talk of sanctions targeting China, and indeed, the received wisdom would probably be that the Chinese economy is so central to the world economy that anything beyond a symbolic gesture would be quite out of the question.

US and European Union sanctions have forced Sovcomflot to sell a big part of its fleet and transform itself into a domestically focused regional player.

If the same thing were attempted towards Cosco and China Merchants, there would be a big shortage of vessels, and a surge of freight rates in certain sectors, if only because of the sheer size of their fleets.

You simply cannot take the fourth-largest containership fleet and more than 100 vrey large crude carriers out of the equation overnight.

Chances are that the current crisis will blow over. Having made her point, Ms Pelosi departed while China’s military exercises are due to finish on Sunday.

But the consensus among international relations scholars is that the risk of war across the Taiwan Strait at some point in the decade ahead, pitting China against the US with potentially catastrophic consequences, is non-trivial.

The rumbling dispute over an uninhabited island chain in the East China Sea — known as the Senkaku Islands to the Japanese and the Diaoyu Islands in China — is another potential flashpoint.

Breathe easy that a confrontation that has been bubbling away since 1949 did not boil over into war. But pray we’ll always be that lucky.

Taiwan to boost basic rate of pay for seafarers