The week in charts: Capesize rates drop | More than 20 ships alongside Ukraine’s ports | Vessels reroute due to China military drills

Lloyd’s List’s weekly look at the data and figures behind our news, analysis and markets coverage 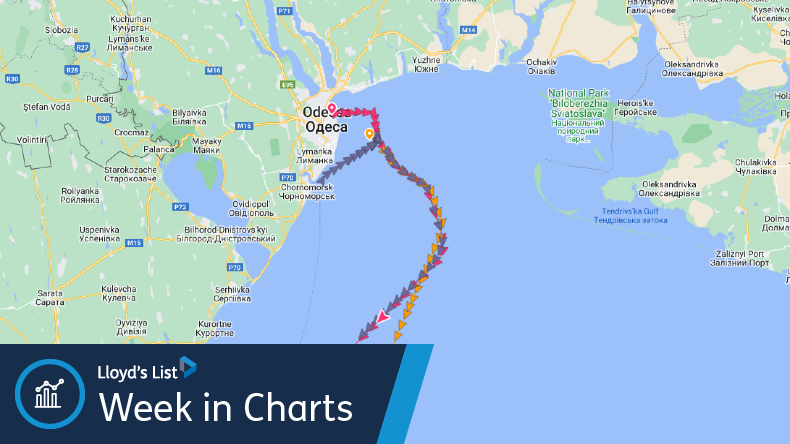 Analysis conducted by data reporter Bridget Diakun showed there were 24 bulk carriers and general cargoships alongside of the ports of Odesa, Chornomorsk and Yuzhnyi as of August 2.

The capesize spot market has suffered further erosion, losing 25% the week to August 3.

Daily rates shed 11% to $14,452 per day at the close on the Baltic Exchange on August 3, compared with the previous session, and are 40% below June 1 figures.

Levels at this time in the past year were in the region of $35,000 per day, rising up to the $50,000 territory by the end of August, writes senior markets reporter Nidaa Bakhsh.

Russian crews on board ships in Ukraine’s port of Izmail claim they are being held hostage and are seeking repatriation.

Crew on one vessel recorded a video message last week saying they were not allowed to go ashore and were under the watch of armed guards. They reportedly have minimal access to food and water, and are unable to pay for mobile communication because of the situation.

The crew indicated that there are a total of 67 crew members stranded in vessels within the repair yards.

There were seven Russia-flagged and Russian affiliated vessels in the Izmail around the time of the invasion on February 24 according to vessel-tracking data.

Commercial vessels in and around Taiwan cleared out from the six closure zones during China’s military drills, although a couple of vessels chose to ignore the warnings against entering the areas.

On average 240 merchant ships passed through the maritime zones each day during the past week, according to Lloyd’s List Intelligence data.

The six closure zones emptied out during on August 4.

The military exercises are not expected to disrupt port operations.