Six closure zones encircling Taiwan means about 240 merchant ships will have to find alternative routes to reach their destinations, but shipment delays likely to be minimal

Commercial vessels will be rerouting their journeys around Taiwan until August 7 as China carries out large-scale military drills. The ports of Taiwan are reportedly operating as normal and disruptions are not expected 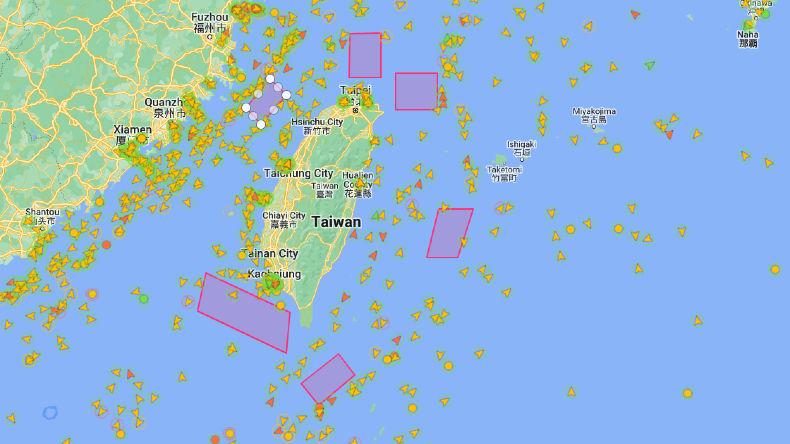 Source: Source: Lloyd's List Intelligence/Seasearcher On average 240 merchant ships passed through the six closure zones each day over the past week.

MERCHANT vessels in and around Taiwan have cleared out from the six closure zones where China’s military drills are taking place, although a couple of vessels have chosen to ignore the warnings against entering the areas.

On average 240 commercial ships passed through the maritime zones each day over the past week, according to Lloyd’s List Intelligence data.

Bulk carriers and containerships are the most common merchant vessels to travel through the areas.

“In light of the ongoing developments, it is of utmost importance that the shipping industry be prepared by exercising extreme vigilance while sailing through the Strait and the wider region, as well as by remaining informed on official directives or notices, in order for commercial vessels to not experience any security incidents that would unwittingly trigger a military escalation between the involved parties,” said maritime security service provider Diaplous.

China is carrying out large-scale drills in and around Taiwan in response to US House of Representatives Speaker Nancy Pelosi’s visit to the country.

Several missiles have been fired into the waters around the disputed island.

The military exercises will run until August 7.

Some areas of the six closure zones cross into Taiwan’s territorial waters and are close to the major ports of Kaohsiung and Keelung.

China’s warnings in response to US House of Representatives speaker Nancy Pelosi’s expected trip to Taiwan has stoked concerns about a military clash in the region. Shipping stocks in Asia tumble amid rising tensions between the world’s two largest economies

Members of the shipping industry have expressed concern that the live-fire military exercises will worsen global supply chain issues.

“The global supply chain is interconnected and all the major stretches like Taiwan Strait are nerve centres of these value chains. And if any one stretch is blocked, the undercurrents are felt across the system,” said Containers xChange chief executive Christian Roeloffs.

“While we do expect trade disruptions across Taiwan, China, South Korea and Japan if the military action persists longer or in intensity, another view is that the supply chain industry has built resilience over these past two years owing to many such shocks in the past.”

Marine insurer Gard put out a notice today saying that there was no impact on the ports of Taiwan and that traffic remained undisrupted.

According to a customer of Container xChange with local business, the short-term impact on containerised trade will be the rerouting of vessels which will add a few days to voyage times.