First grain shipment to sail from Odesa since the start of the Russian invasion is a Sierra Leone-flagged handysize heading for Lebanon. The vessel Razoni will arrive in Turkish waters tomorrow ready for inspection

All eyes are on the ageing bulk carrier Razoni, carrying 26,000 tonnes of corn destined for Lebanon, but also the weight of a unique and tentative diplomatic deal to allow vessels safe passage through a war zone 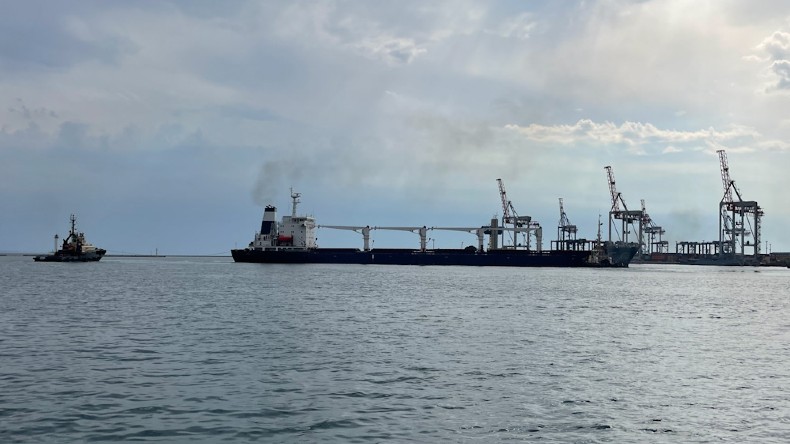 AFTER five months of bloody fighting and weeks of negotiation, the deal reached last month to allow Ukraine to begin shipping some 25m tonnes that Russia’s invasion in February has trapped in the country, finally got underway.

A 26-year-old bulker, the Sierra Leone-flagged Razoni (IMO: 9086526), exited Odesa port at 0930 hrs local time on Monday carrying 26,527 tonnes of corn destined for Lebanon. It was led through the mined waters surrounding Odesa by a Ukrainian-owned tug, Bulat (IMO: 9568536) — one of many tugs that will be increasingly in demand over the coming weeks as ships start the dangerous logistical operation to lift an estimated 25m tonnes of grain that has been blocked in Ukrainian silos since the outbreak of war.

Before others follow the path set by Razoni and Bulat, insurers, diplomats and shpowners will be watching carefully what happens over the next 24 hours.

A shipment of grain is expected to leave Chornomorsk on Friday. However, the political test run comes ahead of crucial details yet to be agreed. Until standard operating procedures are nailed down, the rapid ramping-up of grain exports will be slow to follow

On Tuesday morning Razoni will arrive in Turkish territorial waters, where it will undergo inspections as part of the agreed deal to ensure no arms are being transported. Following inspection, it will proceed to its final destination in Tripoli, Lebanon.

The Joint Co-ordination Centre, established under the Black Sea Grain Initiative, is monitoring the safe passage of the vessel through the Safe Humanitarian Maritime Corridor.

If this initial shipment passes without an incident a further 21 bulk carriers and general cargo vessels remain inside the three ports included under the terms of the safe corridor — Chornomorsk, Odesa and Yuzhnyi.

While Ukrainian Foreign Minister Dmytro Kuleba called the resumption of grain exports a “day of relief for the world, especially for our friends in the Middle East, Asia, and Africa”, it will take several weeks to clear the backlog of grain, even if the shipments start to ramp up quickly.

Before that happens the logistical jigsaw of available crew and vessels need to be balanced against diplomatic priorities to get the right cargoes to the right places. 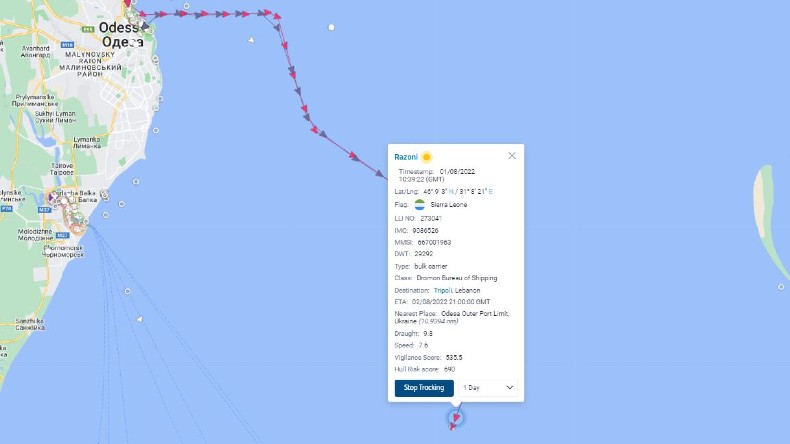 Much speculation had initially surrounded vessels inside the port of Chornomorsk, slated to be the first to test the corridor over the weekend. However, those shipments were apparently held to allow Razoni to be the first. While some ships had started signalling destinations of Western European states, including the UK, the World Food Programme-chartered Razoni was prioritised to ensure that grain was heading to countries urgently in need of grain.

The decision to send the first shipment to Lebanon came only a few hours after part of Beirut’s port grain silos, severely damaged in the 2020 explosion that killed more than 200 people, collapsed on Sunday after a fire that lasted more than three weeks.

It also happened just as Lebanon was engaging in a dispute over another ship loaded with barley and wheat flour. The general cargoship Laodicea (IMO: 9274343) was seized over the weekend in Tripoli while Lebanese authorities determine whether the cargo may have been stolen from Ukraine.

The speed of the shipments will be based partly on the safe logistics of navigating vessels through mined waters. Minesweeping in the ports of Chornomorsk, Odessa and Yuzhnyi has not taken place in advance of these shipments, so vessels will be required to exit via a specific route guided by Ukrainian vessels, and that will require a flotilla of available tugs with sufficient crew able to navigate the narrow waterway.

There is also the outstanding question of available insurance cover for these shipments. While Marsh and underwriter Ascot last week unveiled an initial $50m cargo insurance package covering Ukrainian grain shipments, there will need to be further insurers involved to ensure the volumes of shipments can move.

According to senior insurance market specialists there is appetite for others to follow Marsh and Ascot imminently, but all eyes are on the initial Razoni shipment to test the water before details are confirmed.

Pricing of the insurance will also be another detail that could yet slow down shipments. While insurers are not looking to  take commercial advantage of the situation, crucial details are still unavailable and cover will be subject to last-minute negotiations.

The UN secretary general António Guterres welcomed the departure of Razoni, stating that he “hopes that this will be the first of many commercial ships moving in accordance with the initiative signed, and that this will bring much-needed stability and relief to global food security, especially in the most fragile humanitarian contexts”.

According to a UN statement issued on Monday morning, the World Food Programme is planning to purchase, load and ship an initial 30,000 tonnes of wheat out of Ukraine on an as yet unidentified UN-chartered vessel. The WFP said it would issue more details “in the coming days”. However, it is understood that many of the initial charters of vessels exiting Chornomorsk, Odessa and Yuzhnyi will be via WFP charters.

The resumption of shipments offers hopes of crucial income to Ukraine as its economy buckles under the weight of Russia’s invasion. Farming accounted for over 40% of Ukrainian exports before the war and employs 14% of the country’s population, according to the US Department of Agriculture.

However, the same report from the USDA also makes clear that even if the resumption of shipments through the agreed safe corridor ramps up with no logistical or diplomatic hitches, exports will be fundamentally affected.

The USDA predicts Ukraine will export 30.6m tonnes of grains and seeds in total over the 2022-23 season, almost half the tonnage of the season before.

The Lloyd’s List Podcast: How shipping is managing the risk of lifting Ukraine grain