The cliché is overworked. But it is literally the case that food cargoes prevent starvation in much of the world, and the politicians should make sure shipowners can get them from A to B

Agreement to resume shipments is good news from a commercial standpoint, and even better news for the tens of millions who are one subsidised loaf away from an empty stomach 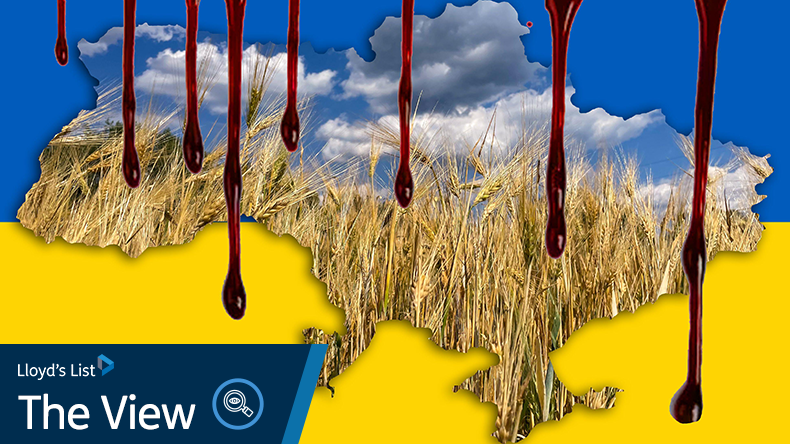 IF YOU’RE looking for an overused example of hyperbolic cliché, the expression ‘it’s a matter of life and death’ is a prime contender.

But its application to the question of grain exports from Ukraine would be entirely justified.

United Nations projections state that 181m people — particularly in the Middle East, North Africa and parts of Asia — could face food crisis or even famine if supplies are not rapidly resumed.

But Russia’s unjustified invasion of its neighbour is now nearing the end of its fifth month, and one of the tactics it has deployed has been a deliberate naval blockade, which has effectively cut off many major Ukrainian ports.

Outbound sailings of bulk carriers and general cargo vessels fell by 95% in the immediate aftermath of the tanks crossing the border, according to Lloyd’s List Intelligence data.

Some respite has been achieved by switching traffic to Danube ports, leading to severe congestion outside the Sulina Canal. But even that was not enough to make up the shortfall.

We have even had a small foretaste of what might happen if this state of affairs were to obtain indefinitely, in the shape of food riots in some places.

Vladimir Putin is a former lieutenant colonel in the KGB and cannot credibly be accused of wide-eyed naivety on this score. There has been speculation that he would be perfectly happy to maximise the leverage this situation offers him, not least as a means of retaliating for western sanctions.

Perhaps he has discovered some hitherto well-hidden moral compass. Perhaps the Kremlin’s foreign policy chiefs have decided that such a course is not in Russia’s longer-term international interest.

In any event, more compassionate counsels have prevailed.

A deal has been signed in Istanbul to allow merchant shipping finally to start getting that grain out there to fill hungry stomachs.

By the standards of any religiously-based or secular humanitarian code — and provided that the aim of the agreement is actually achieved — that can only be a good thing, and will be welcomed by Lloyd’s List readers as much as by anybody else.

But our readers make their living from shipping, and some will profit by taking on the consignments or by providing the services that facilitate the process. So it’s not out of place to consider the implications for our industry.

The deal – brokered by Turkey and the UN — will see Ukrainian pilot vessels guiding bulkers and cargo ships through mined waters to allow access to Ukrainian ports, with Russia agreeing to a truce while convoys move.

Turkey will inspect the merchant ships to cool Russian fears about weapons smuggling, and the US State Department says it will hold Russia to account on observing the small print.

All of this should minimise risk, but not render sailings entirely risk free. Once again, thank the seafarers, whose willingness to work in these conditions makes everything possible.

One snag is that the ships that habitually serve the Black Sea and Azov Sea trades are not there right now.

On the estimate of the International Chamber of Shipping, only 100 vessels are in situ, when four times that number is needed. But that problem can be rectified rapidly enough.

Cover for the additional risk will have to be bought from war risk underwriters, who are in business to do what their job title says on the can, at the appropriate pricing.

There were some complaints early in the crisis that war risk insurers were price gouging, sometimes demanding premiums set at double-digit percentage points of hull value.

Since then, pricing has settled back down to the normal range for actual shooting wars that do not specifically target shipping, and are now typically around 2%.

Devastating though the war has been to Ukraine’s economy, losses of tonnage have been mercifully low, and largely by way of collateral damage.

Dozen ships alongside in Ukraine could be declared total losses

‘There is some debate here as to what is happening. Are the ships subject to an embargo? Is there a blockade, are they trapped? But it really doesn’t matter, you may be entitled to a total loss,’ argues lawyer

Indeed, there may be a substantial upside if some 12 to 15 ships trapped alongside since the start of the conflict can get out before the six-month half anniversary of the fighting, at which point they would have to be declared constructive total losses, with payouts of tens of millions of dollars.

From the perspective of owners, a Ukraine grain export corridor would be a handy fillip to demand, starting with 20m tonnes stuck in silos in Odessa. That is not a game changer, but certainly worth having.

The diplomats have done the deal, and it now falls to three navies — two of them at war with one another — to make sure that it is implemented with the minimum of sand in the gears.

Doing so will be good for shipping. But it is no exaggeration to say that the very survival of millions of people hangs on this.

Never doubt the importance of what you do for a livelihood. It really is a matter of life and death.