In an era of high bunker prices, impending efficiency regulations and additional carbon costs, owners are going back to shipping’s roots — sails 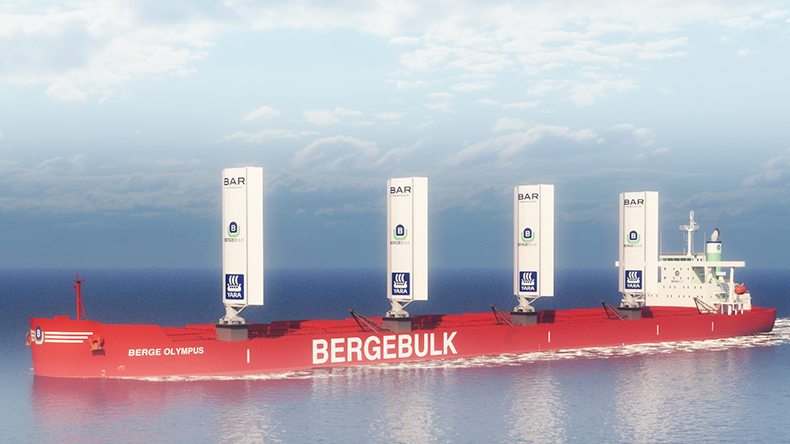 “We’re going to see much greater enthusiasm for wind,” said Diane Gilpin, chief executive of system design company Smart Green Shipping. “This is just the start. The key to the enthusiasm for wind-assist is that wind is free, and reduces fuel use (of any flavour) and so future-proofs ships and creates some resiliency against fuel price shocks.

“It also drives down emissions in the short-term ensuring compliance with the raft of new climate legislation hitting shipping.”

These include the Carbon Intensity Indicator (CII) and Energy Efficiency Existing Ship Index (EEXI), coming into force on January 1, 2023, as well as the European Union’s Emissions Trading System.

There are currently 20 commercial ships in operation, according to the UK-based International Windship Association, which tracks progress. While 20 more are in the pipeline, the figure is expected to accelerate to 100 by 2025.

Wind technology is proving popular as a way of seeing tangible fuel savings and a cut in emissions now while zero-emission fuels are still being developed.

Singapore-based bulker owner Berge Bulk, which has 85 vessels in its fleet, has signed agreements with Anemoi Marine Technologies to equip two of its vessels with four folding rotor sails each.

The large, solid wing sails will measure up to 50 metres in height and help reduce emissions by as much as 30% through wind propulsion and route optimisation

The 2012-built ore-carrying valemax Berge Neblina (IMO: 9447562) was made “wind-ready” earlier this year during a scheduled dry dock, while the 2017-built newcastlemax Berge Mulhacen (IMO: 9750945) is to undergo similar actions based on vessel availability and production slots.

Folding rotor sails can be lowered from the vertical to mitigate the impact on air draught and cargo handling operations.

Berge Bulk chief executive James Marshall said wind technology was just one element in the company’s decarbonisation strategy, and the company will continue to invest in this space if it proves workable.

Wind-assistance can have “an immediate impact on CO2 reduction, whilst we work on the ultimate goal of developing alternative zero-carbon fuels,” he told Lloyd’s List, with emissions cuts of 10%-15% depending on route.

Rotor sails have been around longer, while the fixed wings are newer technology and will have a bigger impact but is more expensive, he added.

Grains giant Cargill, one of the biggest charterers in the dry bulk market, has identified the Pyxis Ocean (IMO: 9798856) to be installed with two sails.

The bulker is expected to go into drydock in the next few months and will begin commercial use with cargo on board in the first quarter of 2023, said the company’s Ocean Transportation head Jan Dieleman. He added that fuel savings could be in the region of 10%-15%, with scope to reach 30% if fully utilised.

However, the company needs to fully understand how it works and what the safety impacts will be.

“We might want to use a period of three to six months to see how it works and then be ready to pull the trigger on an additional series of ships and that will depend on availability of the right ships,” he told Lloyd’s List. “The plan is really to do more of these and get confirmation of this technology. We have done a lot of modelling and data crunching; we are quite confident it will work.”

Tokyo has set a target of a 46% reduction in greenhouse gas emissions by 2030. That will require development of new fuel-efficient technology

Cargill is also starting to look at designing a ship that is optimised for wind, although that is some years away due to yard capacity constraints.

While there are more than a dozen technology companies to choose from, three to four will likely end up dominating the market, according to Gavin Allwright, secretary-general of the International Windship Association.

Different types of technology are better suited to certain vessels and trading routes.

Of the vessels currently using wind-propulsion, two are tankers, two are bulk carriers, four are ro-ros, three are ferries, eight are small general cargoships and one is a large fishing vessel.

Safety issues are of paramount importance to all wind-assist developers, who work with class and naval architects to find the best solutions.

“Heeling angles are a manageable issue with wing sails generating insufficient loads to destabilise beamy bulk ships” said Ms Gilpin, while cameras can be placed strategically to ensure visibility just as in every new car.

Crew training on how to handle the systems would also be included in the customer proposition, she said.

MOL teams up with Drax on wind-powered bulkers

Wind-power system for shipping to get transatlantic test