Colombo and Hambantota: A tale of two ports

Ports are an essential part of the infrastructural mix for emerging market economies. But presidential hometown vanity projects help no-one

Many will remember the third world debt crisis of the 1980s and 1990s. We hope that what faces Sri Lanka next will be easier on its population than what came next in Argentina 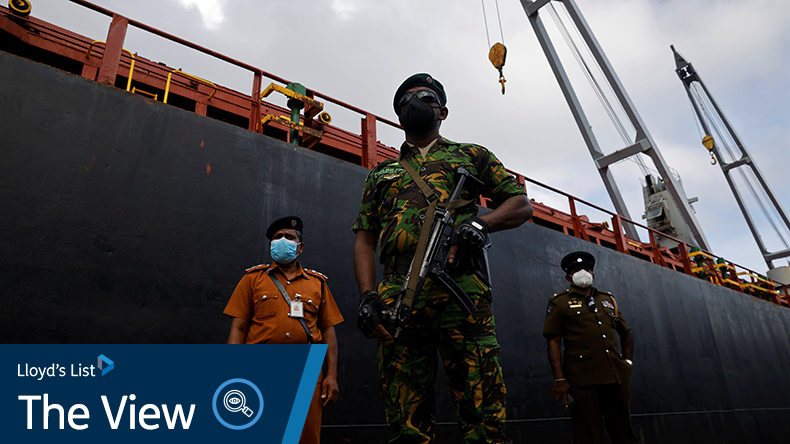 THERE may be no hard and fast rules for when a political crisis becomes a revolution, but when a president has to hotfoot it out of the country in a military jet to escape the wrath of protestors openly skinny dipping in the private swimming pool of the presidential palace, the threshold has probably been crossed.

Sri Lanka has accepted the resignation letter of Gotabaya Rajapaksa, flown in from Singapore, bringing an end to the dynasty that has dominated the nation’s politics for two decades.

Mr Rajapaksa was a patently incompetent steward of the Sri Lankan economy, adopting policies that led to an acute shortage of foreign exchange, thus depriving it of the ability to buy food, fuel, medical supplies and much else.

Although volumes declined in 2020 owing to the pandemic, the port is continuing with its expansion plans

Whether his head on a plate, metaphorically at least, will be enough to defuse months of mass protest remains to be seen.

From a shipping industry perspective, Sri Lanka is best known as home to Colombo, a major international transhipment hub that ranks among the 30 largest container ports worldwide.

The government has prioritised keeping it open, ring fencing the supplies of fuel and currency required to maintain it in operation.

Such a policy will not be an easy sell to a population that is unable to find petrol to fill its motor vehicles, not to mention food to fill its stomachs.

But the port remains a lifeline to the outside world, and closure is not an option. If nothing else, the decision to make fees payable in US dollars rather than Sri Lankan rupees reinforces its importance in limiting the scale of economic disaster.

As Lloyd’s List reported, the number of port calls has been consistent throughout the economic turmoil, although throughput volumes have been declining since the start of the year. Imports in particular have seen a double-digit percentage point decline.

Mr Rajapaksa’s predecessor as president was his brother, Mahinda Rajapaksa, who is largely responsible for setting up his hometown of Hambantota as a port technically capable of rivalling Colombo.

Emerging market economies do need infrastructure investment, often badly. It is right in principle to borrow the money to fund it, providing it offers a positive return in terms of growth.

Unfortunately, Hambantota has been an unviable clunker from the get-go, an object lesson in what not to do.

Financed by loans from China and opened in 2010, it has never earned enough to service its debt, and was sold to China Merchants in 2017 on a 99-year lease. But the port is only the most visible manifestation of a broader phenomenon.

Dozens of countries across Asia and Africa have signed on for China’s Belt and Road Initiative, which has the laudable aim of promoting economic development and inter-regional connectivity.

Ring-fenced fuel reserves and currency restrictions have kept Colombo running through the economic crisis, however volumes have been steadily declining since the beginning of the year

But conveniently for some of the more autocratic regimes in these regions, no impertinent questions are asked on human rights.

All too often, recipients are left with vanity projects that cost the borrower too much and provide too little by way of a boost.

China has promised to play a positive role in resolving Sri Lanka’s debt crisis, but has been reluctant to agree to any degree of debt write-off, presumably for fear that dozens of other BRI beneficiaries will ask for similar leniency.

Older readers will no doubt remember the third world debt crisis of the 1980s and 1990s, and the way debtor countries were put through the wringer of the Washington Consensus.

Not the least of the parallels was President Fernando de la Rua’s dramatic flight from the presidential palace by helicopter.

Not every movie remake is worth watching. We hope that what faces Sri Lanka next will be easier on its population than what came next in Argentina.