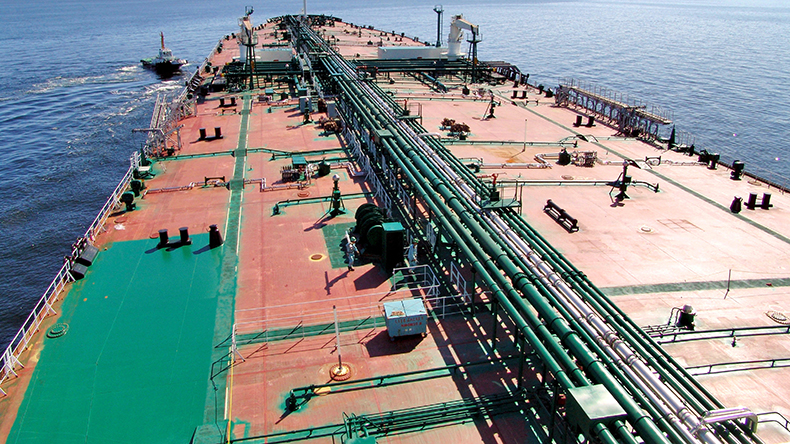 Source: Dinodia Photos / Alamy Stock Photo There is likely to be a tug of war between cargo interests in Venezuela and Iran with Russia for an estimated third-party owned 30 suezmax and 53 very large crude carriers in the subterfuge fleet.

THE fleet of tankers engaged in transporting sanctioned crude will exceed 400 vessels if Russian-linked ships are added to the vessels known to be engaged in Iranian and Venezuelan trades, according to analysis from BRS.

The shipbroker has identified 268 tankers of 34,000 dwt and above, including those in Iran’s National Iranian Tanker Co, as involved in the “illicit carriage of Iranian or Venezuelan oil over the past few years”.

Russian tanker owners and operators cannot call at US or UK ports, while Russian-flagged ships are banned from European Union ports. Oil imports will be phased out in Europe and UK by the end of the year.

If these tankers are used to load Russian crude and added to the so-called shadow or subterfuge fleet of tankers, there are 401 ships that account for 7.6% of the global fleet by number and 9.4% by deadweight, BRS said in its latest monthly report.

There is also likely to be a tug of war between cargo interests in Venezuela and Iran with Russia for the estimated third-party owned 30 suezmax and 53 very large crude carriers in the subterfuge fleet.

“Considering the looming ban on EU companies insuring tankers carrying Russian oil and the likelihood that the UK, home to the world’s largest maritime insurance market, will eventually follow suit, we believe that there remains plenty of scope for the shadow fleet to expand later this year,” the report said.

The BRS analysis showed that medium range tankers were used to ship fuel oil from Venezuela and Iran. Another 187 tankers of less than 34,000 dwt were also identified as shipping clean products, usually short-haul or cabotage voyages, according to BRS.

The average age of those engaged in US-sanctioned trades was 20 years, compared with 12 years for the fleet.

Anonymous buyers have snapped up vintage tonnage that would normally be scrapped over the past three years for sole deployment in US-sanctioned trades.

Tonnage is frequently reflagged, insured outside normal networks, and uses deceptive and evasive practices to avoid detection and obfuscate cargo origin and destination.

“Vintage tanker resale values should remain supported by the anticipated Russian-led expansion of the shadow fleet,” said BRS, which will limit scrapping volumes this year.

“The expansion of the shadow fleet has helped to support vintage tanker prices over the past few years, and all signs suggest that this should continue throughout 2022.

“Unlike the past few years when vintage VLCCs and suezmaxes were purchased for further trading by Chinese or Middle Eastern companies, we believe that prices for vintage aframaxes are set to receive most support this year.”

“A potential method of facilitating the transport of Russian crude to the Pacific would be to lift crude on aframaxes or suezmaxes and then transfer it onto VLCCs by ship-to-ship transfer in the North Atlantic, potentially close to the Azores,” the report said.

“However, for Russia to sustain its crude and fuel exports, at close to today’s level after the introduction of an insurance ban and the EU embargo, the stars would have to align.

“Russia would have to secure extra shadow tankers either by dipping into the second-hand market, or by enticing shadow tankers away from other trades by paying a premium compared with Iran or Venezuela.”