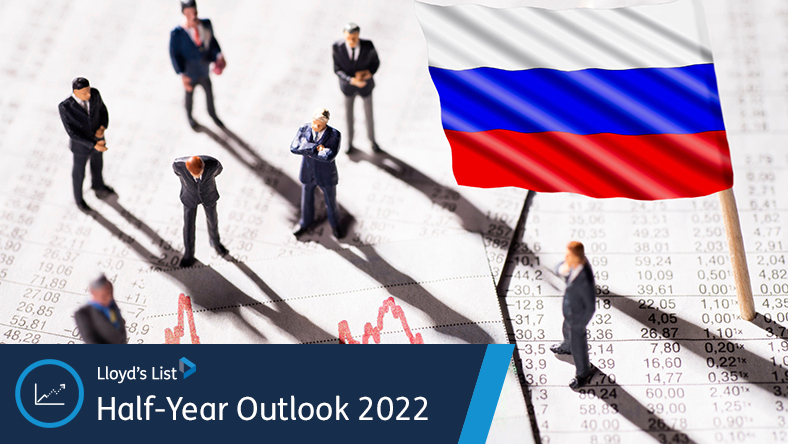 “WE just didn’t see this coming,” a traumatised oil trader whispered to a tanker owner while they were waiting for their drinks at a recent industry gathering.

“Neither did I,” the owner confessed as the two men mutually supersized the order at the bar in preparation for the conversation to follow.

Timing, as ever, is everything in shipping.

Cyclicality can be called, but market peaks are driven by black swans — and, while expecting the unexpected is the basic job description of a shipowner, we are living through extraordinary times.

The pandemic disrupted logistics networks across all sectors and the war is compounding the unresolved issues, magnifying the slowdown in the global economy in the process.

The risk of ‘stagflation’ has already been spelled out by the World Bank, which earlier this month predicted a protracted period of feeble growth and elevated inflation.

The situation in Ukraine, lockdowns in China, supply-chain disruptions, and the risk of stagflation mean that, for many countries, recession will be hard to avoid.

The consequences of that are not yet playing out in the shipping sectors reviewed in this half-yearly outlook report.

However, even in containers, where rates remain high and cash is still flowing into the lines’ bulging coffers, executives are already planning for the post-pandemic party hangover.

The immediate focus is, of course, Russia.

The war in Ukraine is stifling trade and logistics of both the nation and the Black Sea region, but the consequences are being felt globally.

Confronted with trade restrictions and logistical challenges, the cost of oil and gas has increased as the world scrambles for energy security in a market that was already undersupplied prior to the war.

The shifting trade patterns are evolving daily. As Europe steadily dials back its Russian imports, cut-price Russian crude is increasingly heading to Asia, India and potentially even Latin America as pragmatism trumps politics in the rush to stave off fuel price inflation.

Higher energy costs, in turn, have led to higher marine bunker prices, increasing shipping costs for all sectors. By the end of May 2022, the global average price for very low sulphur fuel oil (VLSFO) had increased by 64% since the start of the year.

The shift in grain trading patterns is reflected in port calls by dry bulk vessels in the Black Sea, where ports that normally serve more than 90% of Ukrainian overseas grain shipments have remained shuttered by the conflict.

Lloyd’s List Intelligence's vessel tracking has revealed how overseas grain dispatches have been limited to deliveries via Western borders, by rail, as well as through the small ports of Reni and Izmail on the River Danube.

However, these alternatives are insufficient to compensate for the lost capacity normally provided by Ukrainian Black Sea ports.

Since the start of the war, weekly port calls have gone from 60 to almost zero in Ukraine, and declined somewhat in the Russian Federation and Turkey.

Meanwhile, dry bulk vessel calls have seen small increases at ports in Bulgaria and Romania, reflecting the rerouting of some of the trade from Ukraine.

The impact of the war has reached into every sector and every business in shipping, but the long-term consequences will be largely determined by how long the conflict persists.

According to figures published by consultancy group Accenture earlier this month, the cost of supply chain disruption in the Eurozone across 2022-2023 could range between €242bn (2% of GDP) and €920bn (7.7% of GDP) in a protracted war scenario.

Yet even beyond the war, there is now a sense that the accumulation of disruption and supply chain shocks are transforming global trade more fundamentally.

The era of the long-distance value chain was waning long before Trump, Brexit and the coronavirus pandemic — and the current congestion and supply crunch, followed so closely by a war with global reach, has only further exposed the fragility of the just-in-time threads that hold the global economy together.

Vladimir Putin’s invasion of Ukraine accelerated that search as he painfully exposed Europe’s reliance on Russian energy and the limited good options available for those seeking diversification.

Efficiency will willingly be exchanged for security as firms and governments seek to diversify suppliers subject to global trade chokepoints.

However, redesigning supply chains takes time — and noticing an effect takes even longer.

Political rhetoric will suggest otherwise, but there are limited good options available to unwind the past 40 years of globalised trade.

Russia’s invasion of Ukraine is an undoubted economic shock that will require a global reorientation of trade lanes and spark market turbulence for potentially years to come. Yet in seaborne trade terms, demand will not disappear significantly.

What has disappeared — for shipping, at least — is any certainty about how to plan amid the immediate volatility and the apparently endless flock of black swans disrupting the market.

The shipowner and the oil trader would be well advised to buy another round.

This article is part of Lloyd’s List’s ‘Half-year Outlook’, available for subscribers to download as a PDF here

LNG: Winter of content ahead for traders as global energy crunch drives profits