As global economies struggle with inflation, the pandemic-driven surge in demand for containerised goods is beginning to ease

Box shipping will likely have its most profitable year on record in 2022, but with demand easing and a flood of new tonnage coming into service, the peak may have already passed 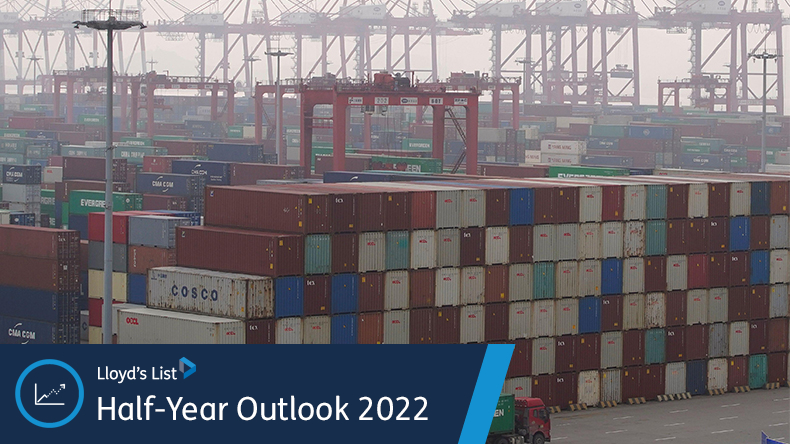 Source: Reuters/Aly Song/Alamy Stock Photo The lockdown in Shanghai saw vessels held up as manufacturing and inland distribution ground to a halt, despite the port staying open.

AT THE beginning of 2022, the container shipping sector outlook was dominated by high demand, sky-rocketing freight rates and continued supply chain congestion, all of which looked set to send carrier profitability to new records.

As the shipping sector prepares for the second half of the year — which will include its traditional peak season in the third quarter — that outlook has changed, although many elements remain the same.

Freight rates, despite falling from their peaks earlier this year, remain high, and many customers have locked in long-term contracts at high rates to ensure capacity.

The requirement to do this is based on the continuing congestion in the supply chain, which is also climbing from its absolute nadir but remains a key factor in the market.

However, there is a general sense that while the party may not yet be over, the peak may have passed.

The Shanghai Containerised Freight Index, for example, has fallen back to levels last seen in June 2021, while Drewry’s composite World Container Index now stands 10% lower than it did a year ago.


Figures from Container Trades Statistics show a softening of demand — albeit from last year’s extreme highs — with year-to-date volumes for April falling 5.6% in 2022 compared to the previous year.

Nevertheless, congestion in the world’s supply chains remains. This was driven partly by the month-long lockdown in Shanghai, which saw vessels held up as manufacturing and inland distribution ground to a halt, despite the port remaining open.

Conditions in the US have remained difficult, with east coast ports having taken up the mantle of congestion, even as it eased somewhat on the west coast.

The queue of ships waiting to berth at San Pedro Bay fell from a record high of 109 in January to just over 20 by mid-June, indicating some improvements, but that has partially come at the cost of lines rerouting to east coast ports instead.

Perhaps one of the biggest ructions has been the impact of the war in Ukraine.

While having little direct influence on container shipping, given the low volumes shipped to and from both Russia and Ukraine, the effect of the war on the global economy could prove to be the biggest threat to box shipping over the second half of the year.

Sanctions on Russia have sent energy prices soaring, with the twin impact of raising operating costs for lines through higher bunker prices, and driving inflation in the world’s economies.

The excess demand seen during the first two years of the pandemic is now set to taper off, with both the International Monetary Fund and the World Bank revising down the lower ranges of their estimated global gross domestic product growth forecasts.

If inflation, as expected, does put pressure on consumers, then demand for containerised freight will slow further as well.

The surge in profits over the past two years has sent carriers and owners racing to the yards to buy new tonnage, much of which will be coming on stream just as this potential slowdown in demand occurs.

There is 7m teu of capacity on order — or 30% of the existing fleet capacity — and, while forecasts for demand growth over the next couple of years are in the sub-3% range, in 2023 the fleet will grow by 7%.

If this coincides with an easing of congestion, which is taking up 10%-12% of capacity, then the spectre of overcapacity emerges again, at least in the short term.

Heading into peak season, there are few signs that congestion will ease before next year, however. The twin US ports of Los Angeles and Long Beach continue to post record throughput figures, with May volumes being among the highest in their history.

In Europe, industrial action at terminals in Germany and Belgium, and driver shortages — partially due to the disappearance of Ukrainian drivers from the market — are clogging up terminals, making it hard to get boxes in or out.

And in the US, the west coast labour contract renegotiation has many on tenterhooks. Both employee and employer sides have said talks will continue beyond the July 1 expiry of the existing contract, and that neither lockouts nor strikes are on the cards.

However, the automation of terminals will be a tough nut to crack, leading to fears a resolution may not be found and congestion will again shoot up.

Meanwhile, in the US in particular, the passage of the Ocean Shipping Reform Act 2022 has again brought the behaviour of carriers into the spotlight.

Despite the Federal Maritime Commission finding that high freight costs were a feature of demand, not collusion, the political rhetoric remains aimed against container lines.

Ocean Shipping Reform Act is a victory of rhetoric over reality

While US President Biden made big claims about the effect of the new shipping act, the reality of the legislation is a lot more prosaic

OSRA22 brings only limited relief to shippers, mainly in terms of detention and demurrage costs and the availability of export containers, so there is an emerging risk that carriers may find themselves faced with further regulatory pressures in the months and years to come.

As container shipping enters the second half of what is still likely to be the most profitable year in its history, it is fair to say that concerns are beginning to mount that the peak has already passed.

This article is part of Lloyd's List's 'Half-year Outlook', available for subscribers to download as a PDF here