All vessels suspected of lifting the stolen commodities are engaging in deceptive shipping practices, according to vessel tracking data

Investigations show Russia moving Ukrainian commodities to Crimea where they are loaded onto vessels. Tracking data shows ships suspected of taking part in the trade are going dark to obfuscate their true origins and destinations 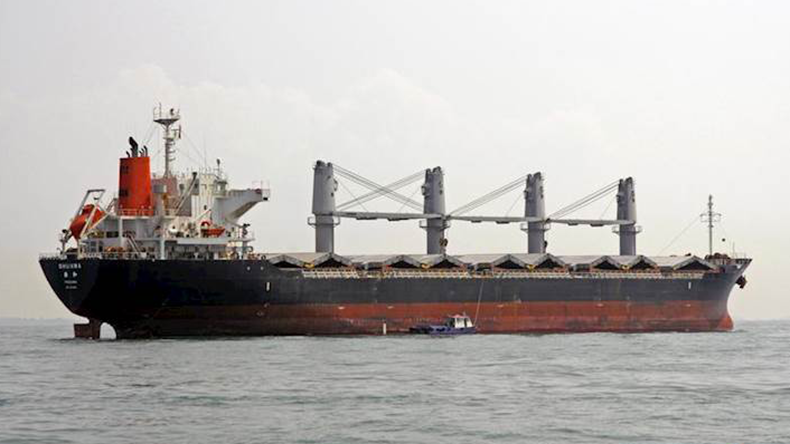 Source: Lloyd's List Intelligence / Seasearcher The bulker Matros Pozynich is one of three handysizes named by the US State Department as carrying plundered grain.

PORTS in Syria and Turkey are receiving cargoes of stolen Ukrainian grain via fleet of at least 10 Russia- and Syria-flagged handysize bulk carriers and cargo vessels, a Lloyd’s List investigation has found.

Ukraine's government has said an estimated 400,000 tonnes of grain has been stolen, according to a CNN report.

Vessel tracking data shows suspicious activity around Crimea, where grain is suspected of being shipped from, over the past eight weeks.

Many of the vessels have engaged in deceptive shipping practices, switching off their transponders for part of voyages, a practice known as ‘going dark’. This helps obfuscate cargo origin and destination.

Grain is trucked from captured territories of the Kherson, Donetsk, Luhansk and Zaporizhzhia regions to Crimean ports for shipment, according to satellite images seen by Lloyd’s List and confirmed by Kateryna Yaresko, a journalist with the SeaKrime project, which has been tracking illegal shipping activity in the region since 2016.

Satellite images obtained during a Radio Liberty investigation, show vessels loading at the ports while their Automatic Identification System is switched off.

Sevastopol, in particular the Avlita grain terminal, and Kerch are the main ports for illicit activity, Ms Yaresko said. She added that Crimea’s other key exporting ports of Evpatoria and Yalta have been closed and activity at Feodosia slowed recently, possibly because of planned repair work.

The registered owner of all vessels is Astrakhan, Russia-based Crane Marine Contractor LLC, according to vessel databases.

Much of the grain was likely heading for Africa, according to the cable, first reported in the New York Times.

Crane Marine, which describes itself as a floating crane operator since 2003, has been approached for comment.

Each of the three handysize vessels can hold about 20,000 tonnes cargoes.

According to Australian government agricultural data, around 20m tonnes of wheat is stranded in Ukraine, the third-largest exporter after Russia and Europe. That is triggering record prices and stoking fears of a global food crisis.

There is no exhaustive list of vessels suspected of carrying stolen Ukrainian grain, but Lloyd’s List has compiled the names of ships linked to the alleged trade.

All vessels exhibit evasive sailing patterns, switching off their AIS either upon entering the Black Sea or while approaching or moving through the Kerch Strait, based on Lloyd’s List Intelligence vessel tracking data.

The vessels then reappear around the opening of the Kerch Strait, known as the Kavkaz Anchorage, or while they are on their way towards the Bosporus Strait.

It is likely that the ships are calling at the ports of Sevastopol and Kerch while they are ‘dark’.

Matros Koshka, for example, appeared just south of the Kerch Strait on May 24 after turning off its signal on May 18 while in the Black Sea. The bulk carrier made its way towards Cyprus before shutting down AIS again on May 30. Matros Koshka was then seen on June 8 off the coast of Lebanon.

The Russia-flagged bulker is said to be affiliated with US-sanctioned United Shipbuilding Corp, but the company does not directly own the ship and it is not therefore subject to sanctions.

Finikia, a Syria-flagged bulk carrier, went off the radar on May 10 in the Black Sea.

It switched on about four days later. It called at the Turkish port of Sariseki on May 24 before arriving at Latakia on May 30.

Finikia is owned by the Syrian government. It has been subject to the US Treasury’s Office of Foreign Assets Control sanctions since 2015.