Seven container shipping lines have got their names into the top 50 carrier league table, four of which are Chinese players that have thrived from a pandemic-induced market boom

Despite the pace of expansion, weakening spot rates and ebbing consumer demand are posing a danger to newer shipping lines. The emerging carriers that have little contract protection and bear higher operating costs are at risk of taking a bigger hit from a market correction 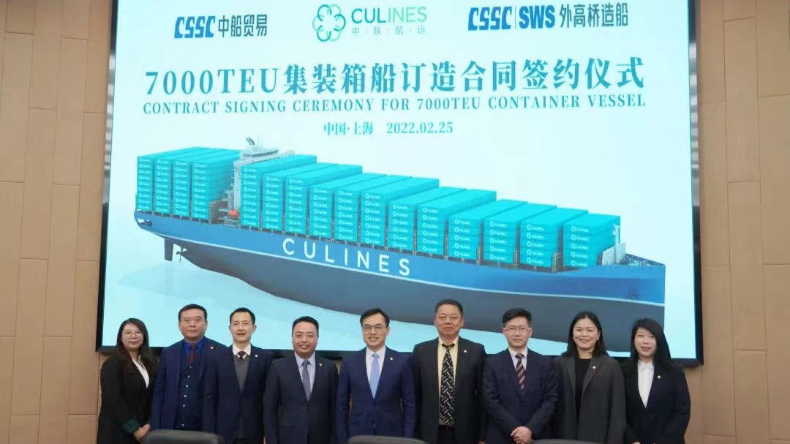 CULines earlier this year ordered two 7,000 teu containerships in an effort to expand its footprint.

CHINESE container shipping carriers emerging from the coronavirus-led logistics bottleneck have been expanding rapidly into the top player league table.

But their prospects are becoming increasingly uncertain amid a softening freight market.

Four of the seven companies that have entered the top 50 liner list this year are from China, according to a Sea-Intelligence report. And three of the four have only managed to thrive in recent years.

The company — which operates a fleet of 82,000 teu in total capacity and is seeking an initial public offering in Hong Kong — was not in the top 100 at the outset of the pandemic, according to the consultancy.

The expansion is set to continue. CULines is scheduled to take delivery of a 2,800 teu secondhand boxship, Cape Marin (IMO: 9571325), in July following the handover earlier this month of a sister vessel, renamed as CUL Manila and deployed on the South China-India service.

That will bring the size of its live fleet to 33 ships, of which five are self-owned, according to the company, which also has an orderbook of nine vessels that represent nearly 40% of its existing carrying capacity.

BAL Container Line and Transfar Shipping rank 44th and 45th, respectively, each with a fleet of about 22,000 teu.

The former is part of Qingdao-based logistics firm LC Group while the latter is backed by Chinese e-commerce giant Alibaba and acquired a trio of 1,800 teu vessels in a $110m deal last month.

And the company is still in the mood for scaling up, with plans to order bigger newbuildings and make inroads into the European markets, he said.

The other top 50 Chinese new entrant is Shanghai Jinjiang Shipping, whose ranking moved up 35th from 57th in 2020, having more than doubled its fleet size over the past two years, according to Sea-Intelligence.

The shortsea shipping subsidiary of Chinese state-owned port giant Shanghai International Port Group is being spun off by the parent company and considering a separate listing on the Shanghai Stock Exchange amid record full-year profits for 2021 expected to top Yuan1bn ($150m).

Despite the pace of expansion, the weakening freight markets overshadowed by ebbing demand from Western consumer countries now pose a danger.

The lack of contract-based cargo and an overreliance on spot markets, which were seen as a source of strength when rates were evaluated may become the Achilles heel of those upstart carriers, said industry experts.

Shipping prices on China to Europe and US routes already started to decline amid the impact from the ongoing Ukraine-Russia conflict and all-time-high inflation in the West.

Rates on Shanghai-US west coast/east coast dropped 1.8% and 0.2%, respectively, to $7,489 and $10,073 per feu on July 17. Meanwhile, those on Shanghai to Europe fell about 1%, the weekly data reported by Shanghai Shipping Exchange show.

The rates decline for exports from Ningbo, another major Chinese port, on the same routes were steeper, according to Ningbo Shipping Exchange.

“Due to the recent gap in the loading rate, some carriers have taken the initiative to reduce freight rates [on Europe and Mediterranean routes] to strengthen cargo collection under pressure, driving the spot price to fall,” it said in a report. “The demand for transportation on the West America route has not improved, the space was obviously surplus, and the decline in the booking price has expanded.”

One Shenzhen-based freight forwarder said the secondary market was even weaker.

Spot rates on the China-US west coast trade, for example, are just above the $7,000 per feu threshold, while prices offered by the new players such as CULines and BAL have dipped to the range of $6,000 per feu in order to solicit more cargo.

The market is expected to correct further at least until the peak season in September, heaping pressure particularly on the upstart carriers that bear higher costs, including chartering fees and terminal charges, when compared to their bigger and established competitors, said the forwarder.

“I think the current rates are approaching their break-even points,” he said. “When [the US west coast price] gets into the $5,000 territory, there will likely be losses for those carriers who entered this market when rates were around $15,000.”

More importantly, the neophyte shipping lines barely have any contract customers that can provide them with protection against such volatility in the spot markets, the person added. And this will further affect their load factors and increase unit cost.

In response, Mr Li from Transpar said his company also does contract business, although he declined to reveal the actual proportion of that volume in the total liftings.

Hua Joo Tan, an analyst at Linerlytica, earlier told Lloyd’s List that the entry of Transpar and its counterparts appears to derive from a perception that they can operate their own vessels to achieve better economics. “But I fear that this will backfire soon because a correction in container freight rates will negate all these moves,” he said.

That is based on his observation that demand is declining as result of a global economic slowdown and that the logistics bottleneck will be improving with the easing of draconian Covid prevention rules.

Some of the new players might have already recalibrated their strategy as the market cools off.

Sea-intelligence’s data show that BAL, for instance, has trimmed its fleet capacity by one third since November last year. Others have started to switch their tonnage to the more lucrative trades such as intra-Asia, according to forwarding sources.

“Given the uncertainties over supply and demand in both Chinese and overseas markets, the relapse of Covid infections, charterers seem to be now less optimistic about the future. They are not as keen as before to take in vessels, especially to fix long-term tonnage,” said SITC Brokers.

The brokerage said the average charter period had dropped to two years from four during the previous peak in mid-2021. But it noted exceptions involving a very small number of large carriers and new entrants still eager to expand.

Mr Li said Transfar Shipping’s foray into shipping and ship owning is not an attempt to compete with the existing large players and the two sides could be complementary to each other.

But at least in private, the large carriers still see their upstart rivals as more of a market disturber. “In the eyes of the major carriers, these newcomers have certainly caused troubles, not least the ramp-up of charter rates,” said a senior manager from a leading European carrier.