Reni, Izmail and Kiliia — the only operating ports under Ukrainian control — have seen a surge in outbound sailings as Ukraine seeks alternative routes to ship its commodities 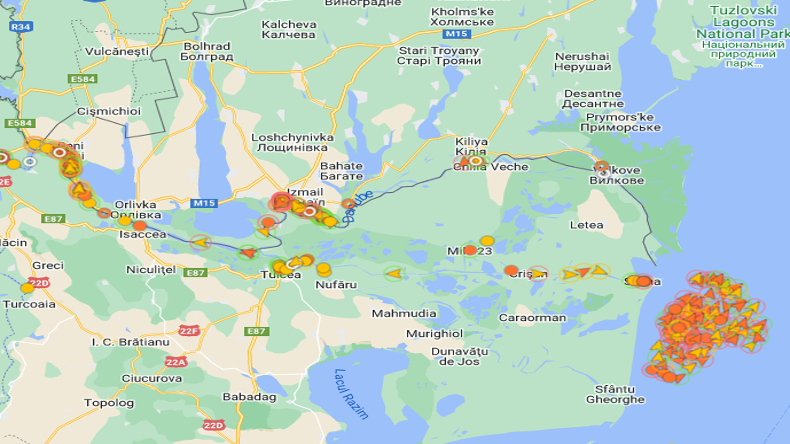 Source: Source: Lloyd's List Intelligence / Seasearcher The ports of Izmail, Reni and Kiliia have significantly increased activity over the past several months to become important gateways for seaborne trade.

DEPARTURES from Ukraine’s Danube ports have quadrupled as Ukraine tries to find viable routes to export grain in the face of Russia’s naval blockade.

Reni, Izmail and Kiliia together recorded 370 outbound sailings of commercial vessels since March, according to vessel tracking data from Lloyd’s List Intelligence. That compares with 90 in the year-earlier period.

The ports, which border Romania, are the only operating ports under Ukrainian control.

Seaborne trade out of Ukraine all but ground to a halt after the Russian invasion, but two ports bordering Romania have stepped up operations to keep goods flowing internationally

Departures from the Danube ports has steadily increased throughout the conflict as the government seeks alternative routes to keep grain flowing abroad.

Grain is being re-routed to Romania after being transported by rail to ports on the River Danube. It is then loaded and sent towards Constanta, which is described as a “complex and costly” process.

“Those routes are not perfect because it creates certain bottlenecks, but we are doing our best to develop those routes in the meantime,” Mr Senik told Reuters.

New areas for handling cargo at the ports of Izmail and Reni are in development as well as a new berth for wet bulk cargoes, says Eurogal Surveys claims handler Anna Biliuga.

The share of grain handled at Reni and Izmail has increased from 12% to 81% since the beginning of the year.

The main issue facing the ports right now is a lack of fleet for loading, explains Biliuga.

The Danube ports are keeping trade flowing, but it is not at the scale the world needs to avoid a food crisis.

Russia’s blockade of ports in the Black Sea and Azov Sea has stopped 25m tonnes of corn, sunflower oil, wheat and other agricultural products from being exported, Ukraine President Volodymyr Zelenskiy said in a virtual address to the annual Shangri La Dialogue defence summit held in Singapore at the weekend.