The cross-currents of international affairs largely work in the industry’s favour right now. But spare a thought for those at the sharp end, including Ukrainians and the 49 seafarers held hostage by Iran 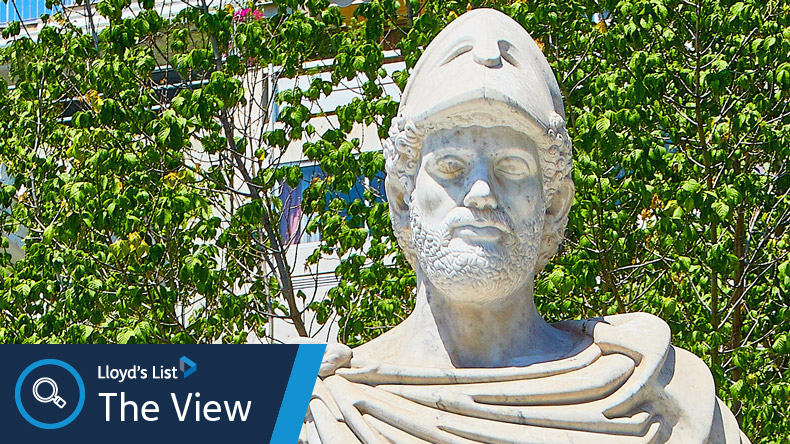 Source: Pericles image: Alvaro German Vilela / Alamy Stock Photo Pericles: A remark as apt today as it was 2,500 years ago.

How apt, then, for this exact sentiment to re-emerge at the Posidonia trade show in the Greek capital this week, with attendees at one accompanying forum told that politics is surpassing economics as a driver of shipping market right now.

And what’s more, politics these days look good for the industry, opined Braemar’s head of research Henry Curra. Indeed, his assessment was that they will likely underpin continuing strength in freight markets for years to come.

Many sectors, from containers through to dry bulk, LNG and LPG, are doing nicely thank you already. Tankers will get there eventually, even if they are slightly late to the party.

Shipping segments are doing well from the efficiencies caused by the situation in Ukraine and supply chain chaos, but political forces responsible are harder to plan for and sanctions are an increasing worry

Shipping has found itself an unintentional beneficiary of the fallout from Russia’s brutal aggression against Ukraine and the subsequent sanctions imposed as a result.

Where the gains for shipowners are incidental to circumstances beyond their control, there can be no cause for moral concern.

Yet those in the thick of the trade must balance two convictions that uninitiated outsiders may feel are difficult to reconcile.

On the one hand, there is natural abhorrence at the destruction wrought by Russia; on the other, an agnostic devotion to keeping the propellers turning in the service of world trade.

There has been controversy over the choice of some owners to continue loading Russian oil and bulk cargoes, rather than self-sanction ahead of a recently-unveiled European Union proposal to ban them from doing so.

But as the Union of Greek Shipowners contended at the press conference that closed Posidonia, this is not currently illegal.

The UGS commitment that EU stipulations will be strictly observed once the wind-down period expires is welcome, although some of its members have questioned the wisdom of Brussels’ course.

It must also be noted that the impact of politics on shipping is not always benign at the micro level.

Another big story of late has been the seizure of two Greek suezmaxes and the seafarers on board them by the Islamic Revolutionary Guards Corps, the real power in the land in Iran.

The move appears direct tit-for-tat retaliation for the earlier US confiscation of a consignment of Iranian oil on board the Russia-flag tanker Lana (IMO: 9256860) in the Aegean last month.

Hopes for a resolution have been boosted by a Greek court decision, which supported an Iranian appeal against the original US move.

There is no question that Iranian crude will be needed to make up the shortfall arising from the restrictions imposed on Russian crude.

But the plot has become further complicated after Dynacom Tankers’ aframax Ice Energy (IMO: 9301732) undertook a ship-to-ship transfer of about half of Lana’s load for onward carriage to New York, only for it to be detained when it called at Piraeus for bunkers.

Dynacom boss George Prokopiou slammed the detention as “100% political”; unless the inspection shows concrete grounds for detention of which we are unaware, he is probably 100% right.

The backdrop here is another long-running international relations imbroglio, namely the sanctions imposed on Iran as a result of its nuclear programme, their removal under Obama, their reimposition under Trump, and the talks aimed at lifting them again under Biden.

This is a spat between governments, on account of which 49 working people are being held hostage by way of bargaining chips. That is obviously ethically unsupportable.

War and pandemic ‘good for shipping’

Disastrous political and economic events have been good for shipping as uncertainty keeps the orderbook low and extends the distances goods must be shipped. But the crewing crisis is still a big challenge and sanctions a worsening headache

Tehran may decide to hang on to the ships, although it is questionable whether that will strengthen its negotiating position. But there is absolutely no reason why it should not release the seafarers immediately.

Individual shipowners are as entitled as any other citizen to their private political opinion, although overt public expressions of their viewpoints are vanishingly rare.

Shipping by and large does not overtly engage in collective political activity, beyond standard trade association lobbying efforts needed to ensure its voice is heard at government and EU level.

If anything, generational change has made it a markedly more small-l liberal place than even a decade ago, with younger owners taking issues such as climate change and diversity more seriously than did their parents.

But as Pericles so cleverly put it, shipping cannot afford to be entirely apolitical, not least because of the impact of the world around it.

That holds true when the cross-currents work against it, as well as when they work in its favour.