War and pandemic ‘good for shipping’

Disastrous political and economic events have been good for shipping as uncertainty keeps the orderbook low and extends the distances goods must be shipped. But the crewing crisis is still a big challenge and sanctions a worsening headache 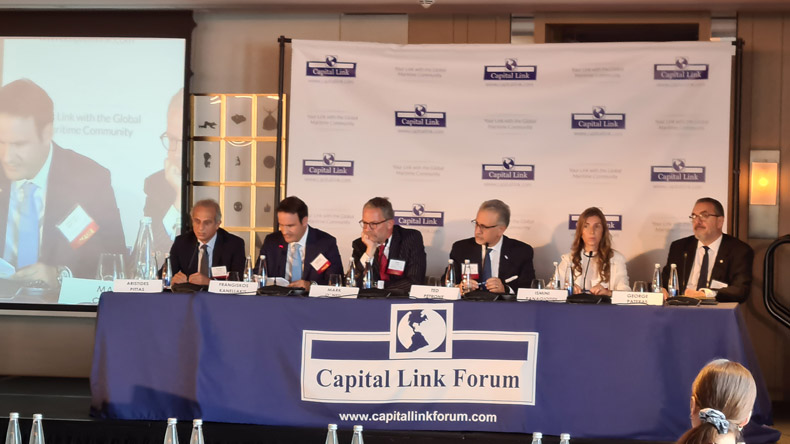 THE invasion of Ukraine and a global pandemic have been disastrous for the world but good for shipping, a Capital Link conference was told.

Increases in commodity prices and sanctions on Russia have lengthened the distances commodities must be carried around the world, benefiting bulkers and tankers.

Boxships, the least-affected segment, continue to do well from supply chain chaos.

But that chaos coupled with sanctions, uncertainty about future emissions regulations, and the crewing crisis continue to challenge the industry, panellists told a Posidonia audience in Athens.

While sanctions have meant an increasing burden on operators, they are also spurring the creation of new trade routes as people seek to subvert them.

Dozen ships alongside in Ukraine could be declared total losses

‘There is some debate here as to what is happening. Are the ships subject to an embargo? Is there a blockade, are they trapped? But it really doesn’t matter, you may be entitled to a total loss,’ argues lawyer

The situation in Ukraine and the the health crisis have been “disastrous things for the world… but it’s been very good for shipping”, according to Aristides Pittas, chief executive of Euroseas. “It didn’t feel like that at the beginning, but it has been.”

Navios Group vice-chairman Ted Petrone said tonne-miles were up 4.5% for crude carriers and 3.5% for oil products. But supplies of coal and wheat from the Black Sea were restricted and food shortages loomed.

But the war has also threatened ships and their crews.

Hellenic Chamber of Shipping chairman George Pateras said there were 86 ships trapped in Ukraine, 14 of which were Greek, adding these could cost insurers $3bn-$4bn if they were not released.

“Lloyd’s is going to suffer tremendously,” he said, adding premiums would rise as a result.

Shifting seaborne trade of Ukrainian grain to rail would be hard: there were seven different railway gauges used between Ukraine and the UK, Mr Pateras said.

He said the sanctions punished Russian people who could not be blamed for the actions of their leaders. Russians should be allowed food and “certain wares” so they could get on with their lives.

He said a €5,000 ($5,365) Louis Vuitton skirt would end up costing €300 more as it was shipped from Paris to Shanghai and from there to Moscow. “I don’t think any oligarch’s wife would worry about the additional price,” he said. “It just adds tonne-miles.”

Mr Pateras, deputy chairman of Contships Management, added that shipping should stand up to and protest against the “state-financed piracy” of Iran’s Islamic Revolutionary Guard Corps, which last month detained two tankers, reportedly in retaliation for Greece’s ‘stealing’ of Iranian oil.

Pavimar chief executive Ismini Panagiotides said the crewing crisis had not gone away and supply of seafarers would continue to fall, with 10% of seafarers coming from Russia and 4% from Ukraine.

Columbia Shipmanagement president Mark O’Neil said the pandemic had shown the need for size and scale, and niche shipping companies risked “being absorbed into the wider logistical chain”.

Mr Pittas said it was “extremely difficult” to plan for the future, but companies should focus on having strong balance sheets and “don’t be too adventurous”.