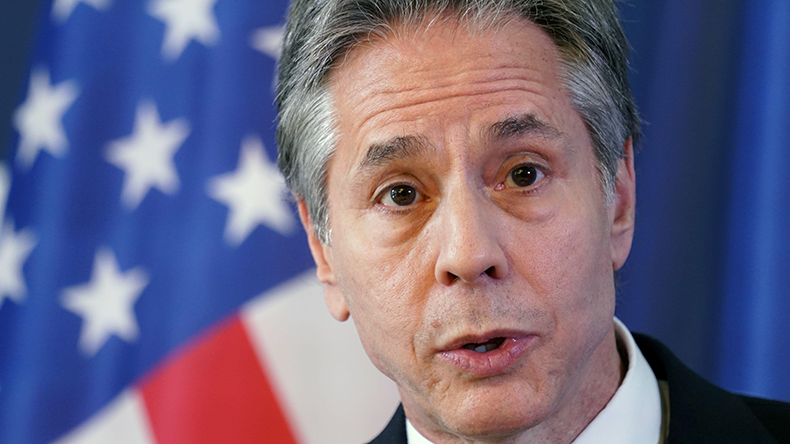 Source: REUTERS / Kevin Lamarque / Pool ‘The US will not hesitate to target those who support the [Islamic Revolutionary Guard Corps] or Hizbollah,’ US Secretary of State Antony Blinken said in a tweet.

FOLLOWING several months of ambiguous signals from Washington regarding its enforcement strategy for sanctions against illicitly traded Iranian oil, the US Treasury Department has issued a comprehensive crackdown against a Moscow-backed Iranian oil smuggling network.

The enforcement notice issued by the Office of Foreign Assets Control on Wednesday details the results of a months’ long investigation into subterfuge oil trading.

Ofac sanctioned an international oil smuggling and money laundering network led by Islamic Revolutionary Guard Corps’ Quds Force officials that has facilitated the sale of hundreds of millions of dollars’ worth of Iranian oil for both the IRGC-QF and Hizbollah.

The accompanying detail of the action offers the most comprehensive indicator of US sanctions strategy seen in several months.

The sanctions targeted a complex network of companies, which Ofac said were used to help transfer millions of dollars on behalf of the Quds Force, and UAE-based Zamanoil DMCC, which Washington accused of working with the Russian government and state-owned Rosneft to ship Iranian oil to companies in Europe.

According to Cari N. Stinebower, a sanctions expert and partner at the US law firm Winston & Strawn, the detailed exposure of the smuggling network should be read as a statement of intent when it comes to shipping being targeted by US authorities.

“This investigation would have included subpoenas to various P&I clubs, to the financial institutions, to the shipowners… to everyone along the chain,” Ms Stinebower told a Lloyd’s List webinar on Thursday. “The risk exposure from something like this very expansive money laundering and illicit trade platform that has been exposed to have tentacles that reach into all areas of the shipping business, is significant.

“So, I think every time there is an enforcement action, particularly one as detailed as this, what it does is it provides you with a window of priorities for the government.”

US position on Russian sanctions is far from clear-cut

The US has followed its UK, Canadian and EU counterparts with restrictions on Russian-associated vessels in response to the invasion of Ukraine, but abiding to the latest presidential proclamation is no mean feat

The Biden administration has been engaged in indirect talks to restart a 2015 nuclear deal with Iran.

However, with those negotiations faltering White House statements this week have signalled that sanctions on Iran’s oil trade will be strictly enforced.

“While the United States continues to seek a mutual return to full implementation of the JCPOA [Joint Comprehensive Plan of Action], we will not hesitate to target those who support the [Islamic Revolutionary Guard Corps] or Hizbollah,” US Secretary of State Antony Blinken said in a tweet on Wednesday.

Despite suggestions that Washington may drop the IRGC from its terrorism list, that plan has been formally dropped this week as rhetoric against Tehran was stepped up.

Washington’s Iran envoy Rob Malley told the Senate Foreign Relations Committee on Wednesday the chances of reviving the nuclear deal were shaky at best, and Washington was ready to tighten sanctions on Iran.

Signals that US will be tightening actions against Iranian subterfuge shipping come as the US seized a cargo of Iranian crude oil from a Russia-flagged tanker being held in Greek waters and chartered a Greek-owned tanker to transport the oil back to the US.

The Russia-flagged aframax Lana (IMO: 9256860), formerly named Pegas, was detained on April 15 by Greek authorities and had been waiting at Karistos port pending a court ruling.

As Lloyd’s List revealed this week, a Dynacom-owned tanker Ice Energy (IMO: 9301732) started a ship-to-ship transfer with Lana in Greek waters four miles off the coast of Karistos.

A second STS operation is expected to complete the transfer of oil, however the vessel chartered for this section of the operation has not yet been identified.

The seizure, combined with the threatened US crackdown has already raised concerns in Tehran.

According to Iranian press reports, Iran’s Foreign Ministry summoned the Greek chargé d’affaires on May 25 to protest the seizure of the oil. The ministry said it notified the official of Greece’s “international obligations”.