The shifting trade patterns and cargo flows being accelerated by the pandemic in China, and the West’s push for decoupling, are expected to benefit intra-Asia trade 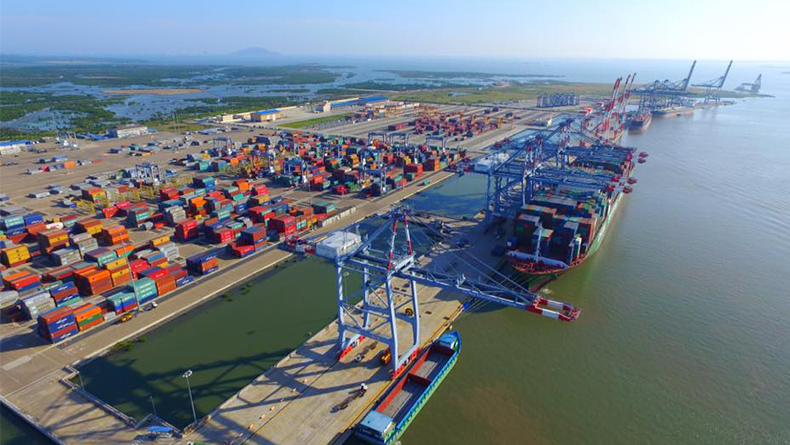 Source: APM Terminals Cap Mei terminal at the port of Ho Chi Minh in Vietnam: That country saw its exports to the US and European Union increase more than 30% during April.

THE worst of Shanghai’s coronavirus outbreak appears to be easing, with a decline in new infections allowing for a relaxation of  strict lockdown rules and a resumption of factory operations and increasing port volumes.

But the scars left by the crisis and China’s underlying zero-Covid policy will take time to heal.

Local officials were quoted by Chinese media as saying that “extraordinary measures” are required to stimulate the economy, as the pandemic-led lockdowns in many parts of the country have disrupted production, choked consumption and curbed investment.

As one of the consequences, the economic turbulence has raised the prospects of a further supply chain migration out of China and an acceleration of trade diversion.

Shipping, in particular container shipping, must pay heed to that trend.

“The pandemic and lockdown have a devastating effect on our industry,” said Robin Xing, who owns a garment business in China.

His factories have so far managed to escape from a total shutdown as they are located out of Shanghai in provinces such as Fujian and Jiangxi. But strict local virus control rules remain a big problem for his company.

Frequent nucleic acid tests, for example, have become a huge distraction for workers and reduced their efficiency. Also, trucking bottlenecks due to roadblocks and travel restrictions have delayed shipments and increased logistics costs, he said.

“I think the latest wave of infections in China and its impact are reminding lots of people again that they should not put all their eggs in one basket.”

The migration of Chinese manufacturing industry, spearheaded by the garment sector, to overseas has been going on for many years, driven by labour costs, regulatory compliance and more recently by the Sino-US trade war.

The trend back-pedalled in the earlier days of the pandemic when the emerging manufacturing hubs such as India and Vietnam were hobbled by surging Covid cases, and the resulting chaos in production and logistics activities.

“Everyone has always relied on China. For the first two years of the pandemic, China navigated it so well that people were saying, 'Should we really think about moving our production to Vietnam?’” said Thomas Knudsen, Singapore-based managing director of Australian logistics company Toll Group.

He said the current situation proved that “single source dependency is never a good idea”.

Customs data shows that the year-on-year growth rate of Chinese exports to the US and European Union in dollar terms already slid to 9.4% and 7.1%, respectively, in April from the previous double-digit levels.

In comparison, Vietnam for instance saw its exports increase more than 30% during the same month to both two destinations.

The decades of accumulation of strength in supply chain infrastructure will allow China to come back quickly and remain as the dominant manufacturing power in Asia, said Mr Knudsen.

“But there will probably be companies thinking that 95% sourcing of our products from China is not sustainable. This is causing people to rethink their supply chains and pushing some of it to Southeast Asia and India.”

A survey conducted by the European Chamber of Commerce in China found the escalation of lockdown measure across the country since March had led to member companies increasingly evaluating alternative markets to invest in.

Almost a quarter of respondents were considering moving current or planned investments out of China, more than double the tally at the beginning of the year.

While risks involving setting up factories in a foreign nation have so far keep Mr Xing and many of his peers in their motherland, requirements from clients, the international buyers such as H&M, could force changes.

“Price and lead time are the two most important metrics in the eyes of buyers. If they perceive the disruptions in China as some kind of new normal due to lockdowns and China’s insistence on zero-Covid policy, they might well shift the orders to other countries,” he said.

The strategy of the European Union, US and Japan to decouple from China in supply chains will give a boost to rising manufacturing countries such as Vietnam, according to Shen Jiangang, chief economist at JD Digits, the tech arm of Chinese e-commerce giant JD.com.

During a recent bilateral summit, the US made it clear that it wants the Association of Southeast Asian Nations to help replace the Chinese supply chains, and said it could offer technology transfer when it is necessary, Mr Shen wrote in an article on the Chinese website of the FT.

While Southeast Asian factories remain primarily involved in lower-end manufacturing, China should “take seriously” the risks of losing its higher-end supply chain in the medium to long term, he said.

That is because for many products, factories in other countries still use components and feedstocks from China despite the migration of the final assembly, and that increase the movement of cargo.

“It used to be one move from China to let’s say the US,” said Mr Saxon. “It’s now two moves from China to Vietnam with components and Vietnam to the US with the final product.”

The shifting trade patterns and cargo flows being accelerated by the pandemic, and the push for decoupling, are also expected to rejig some of the existing shipping and logistics models.

Intra-Asia volume will ramp up on the growing needs for shipping intermediate goods, leading to carriers further expanding their exposure to the market, said Han Ning, a senior consultant and director of China at Drewry Shipping Consultants.

“Major carriers will better integrate their long-haul and regional services to carter to the demand of big shippers or manufacturers that have factories in both China and Southeast Asia, while the intra-Asia specialists will take the opportunity to expand their fleet and services.”

She added that even some Chinese carriers serving domestic trade are now planning to make a foray into the perceived lucrative mode.

Overcrowded terminal yards and hinterland delays are leading to lengthy delays. A surge of cargo from Shanghai could lead to further problems

On the operational side, multi-country consolidation services — which combine cargo from different countries of origin to build a full container load that enjoys cheaper freight rates than a less-than-container load — might gain traction.

Inventory from Vietnam, Thailand, Malaysia and China will be aggregated into Singapore, or Klang in Malaysia, or a port in Indonesia if the local government opens up the infrastructure, according to Mr Knudsen.

The need to improve connectivity between warehouses, distribution centres and ports will also give rise to more cross-border trucking and rail services in regions such as Southeast Asia as an alternative to ocean freight, he said.

“I think one big thing that will happen over the next few years is that some volume will move from ocean into to land-based transport. Just 2% of ocean is going to have a massive positive impact on rail and trucks.”