A redrawing of global trade flows may become more apparent later in the year but for now the Atlantic basin is seeing more activity, although that does not necessarily translate to higher tonne-miles GRAIN trade flows have yet to experience any drastic alterations as a result of the Russia-induced war in Ukraine, according to analysts, although a real shift may become more apparent later in the year.

So far, the most notable trade flow shift has been an increase in South American volumes staying in the Atlantic, with proportionately less heading to the Far East, according to Arrow Shipbroking.

African grain imports from South America have surged as Russian and Ukrainian grain exports have slowed, which is affecting the whole dry bulk market as the lower volumes are not being offset by longer voyage distances, according to research analyst Harry Grimes. 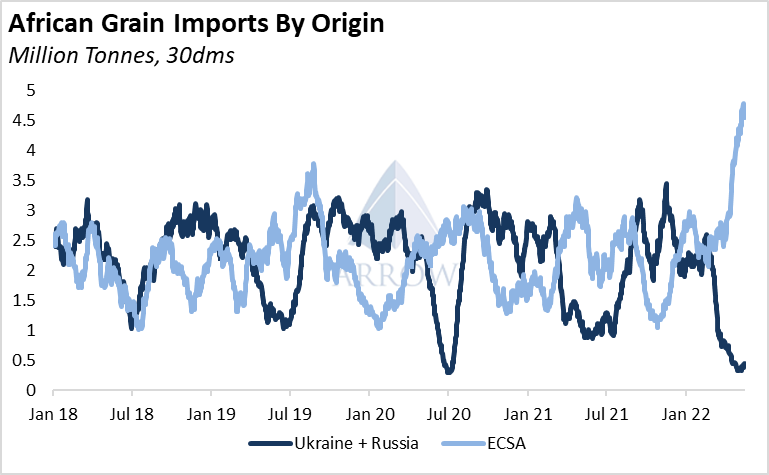 In fact, average voyage distances have been dragged down on a seasonal basis, with tonne-miles about 20% lower than at the same time last year, he said.

Since Russia’s invasion on February 24, volumes from Ukraine have trickled, raising concerns about food security and price inflation around the world, so much so that countries are investigating ways of keeping grains flowing from the war-torn country, such as military escorts, although several hurdles need to be overcome before this action can even be seriously considered.

According to estimates by Danish grains consultancy BullPositions, a monthly volume of up to 1.5m tonnes of Ukraine wheat and barley could be exported via land for port loadings in Romania and Bulgaria in the coming season. 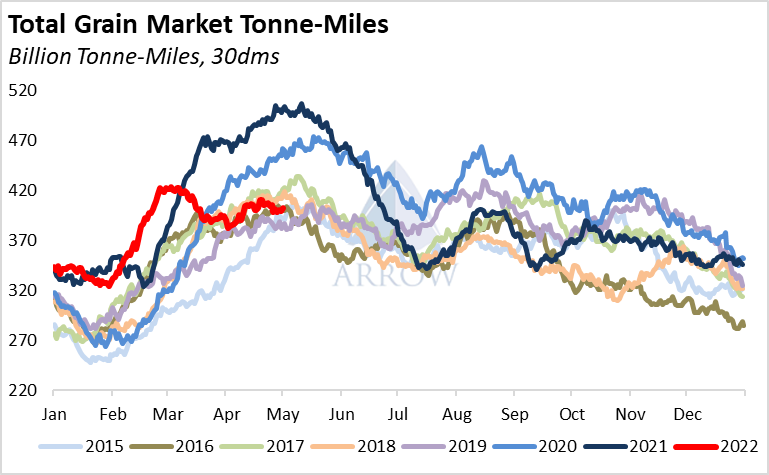 That would mean a potential of 22m tonnes being exported from Black Sea ports, including Russia, in the third quarter of the year. That compares with a total of 35m tonnes over the same period last year, however.

Therefore, the market should expect “a significant decline” in the post-harvest Black Sea peak period for grain exports from July to September, it said in a note.

Some in the market had expected Australia to make up some of the shortfall in wheat from Ukraine, but volumes tend to stay in the Pacific basin, with just 5%-10% making it to the Atlantic, according to Arrow.

Higher wheat volumes are expected from Canada, Russia and the European Union, according to Banchero Costa, with more coarse grains expected from Brazil.

India was also considered to be an alternative supplier of wheat with promises of up to 10m tonnes, but a heatwave and soaring domestic prices forced the Modi government to U-turn on the idea.

That leaves buyers with “even more limited options”, according to ship brokerage Braemar ACM, leaving Australia and the US as the only other major exporters that could support buyers looking to avoid Russian crop.

European grain buyers turning to the US for supplies should boost demand in transatlantic trade for the smaller vessels, dry bulk analyst Mark Nugent said.

In April, the US loaded 717,000 tonnes of grain destined for Europe compared with just 134,000 over the same period last year, and further increases can be expected.

“The rise in unseasonal grain purchases is likely a result of importers stockpiling in anticipation of further shortages to come as the Black Sea exporting season nears,” he said.

“Coupled with increased coal shipments, all dry bulk sectors are set to find greater employment from transatlantic voyages while these alternative trade flows continue,” he added.

Indeed, supramax spot rates have maintained strength, quoted above $30,000 per day for the past month, according to data from the Baltic Exchange.

Last month, 306,000 tonnes of grain (mostly corn) loaded in Brazil destined for Egypt, according to Braemar. That is the strongest April on record for this trade and more than double the volume year on year.

That comes as volumes to Europe declined. 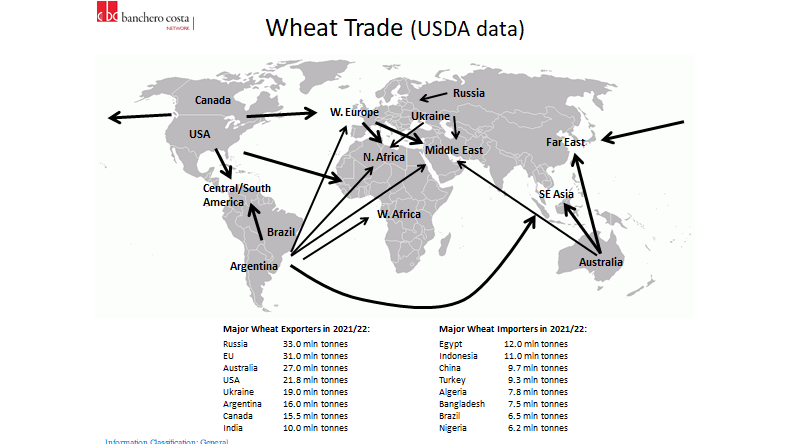 Wheat shipments from Argentina almost doubled to 2.2m tonnes in April, with the majority heading to Indonesia, a very demand-intensive trade for the smaller vessels, Braemar said in a note.

Chinese bulk carrier demand for wheat, which has been relatively muted so far in 2022, may get a boost in the coming months, it said, given concerns about domestic output due to flooding.

So far, China’s wheat of choice has been from Australia, with shipments in April more than doubling to 643,000 tonnes versus the same month last year. 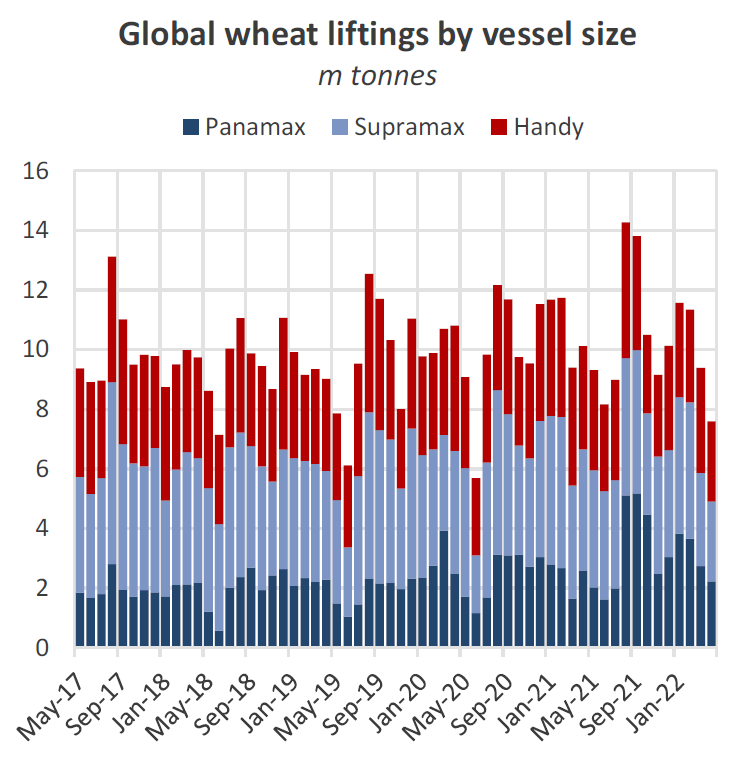 According to ship brokerage Simpson Spence Young, the latest estimates from the US Department of Agriculture does not have “exclusively positive implications for shipping”, there are some potential plus points in terms of bulker demand.

The positives include an anticipated surge in Brazil’s corn exports, which are likely to peak in the third quarter of this year, offsetting a potential lack of Ukrainian wheat cargoes, as well as another robust year for Argentine grain exports with a strong long-haul component into Asian markets.

In addition, an expected recovery in Canadian wheat exports in the 2022/23 season after a drought-impacted the previous trading year, should boost demand for bulkers, while a strong Brazilian soyabean crop should benefit panamax demand in the Atlantic in the second quarter of next year.

With assistance by Bridget Diakun