While there is support for grains to move out of Ukraine by sea to avert a looming global food crisis, it is unclear how that can be achieved

The UK’s proposal to send warships to the Black Sea to ensure grains are able to be exported out of Ukraine is not workable, due to several major hurdles that would need to be overcome 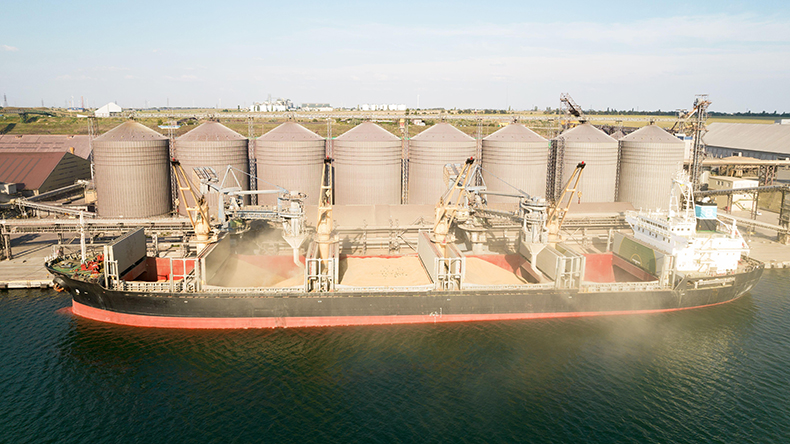 Source: Larina Elena / Alamy Stock Photo Ukraine is set to lose 24m tonnes of grain export potential, from ports such as Odessa (above), in the 2022/23 season.

A UK proposal to try to stave off a looming global food crisis by sending warships to escort grains out of war-torn Ukraine is difficult to enact in practice due to several major hurdles, Lloyd’s List has learnt.

The biggest challenge facing such a plan is that Turkey has enforced the Montreux Convention, which prevents warships, other than those based in the Black Sea, from entering via the Bosporus Strait.

Under the convention, which regulates maritime traffic in the Black Sea, warships are required to provide 15 days’ notice to the Turkish government, which is available as a matter of public record.

In addition, an international agreement would need to be signed between Ukraine and Russia to ensure that Ukraine would not exploit opportunities to bring in weapons into the country through the big bulkers, while the Kremlin would have to agree not to destroy these commercial ships.

Unless China can persuade Russia’s President Vladimir Putin to allow the empty bulkers to call at Odessa, Ukraine’s largest port, it is highly unlikely that this will be agreed anytime soon.

Sea mines placed to protect Ukraine’s coastline and ports would also have to be removed to allow for safe passage, but this is unlikely to happen while the war, which was started by Russia on February 24, shows no signs of abating.

While something must be done about the food crisis, and there is strong international support to see grains exported from Ukraine by sea, there are no concrete details, yet, as to how this can realistically be achieved.

According to media reports, the UK was in talks with allies about creating safe corridors for grains shipments.

UK Foreign Secretary Liz Truss was quoted as saying that she was working on an “urgent solution” to get the grains out of Ukraine.

“Putin’s despicable blockade of Odessa is preventing food getting to people who need it,” a naval source said. “We will continue to work intensively with international partners to find ways to resume the export of grain from Ukraine.”

“However, there are no current plans to deploy UK warships to the Black Sea.”

With the world facing food inflation and growing concerns about starvation, the United Nations secretary-general Antonio Guterres said during a food security meeting that the war in Ukraine was sending millions of people into food poverty and onto the brink of famine.

“Russia must permit the safe and secure export of grain stored in Ukrainian ports,” he said. “Alternative transportation routes can be explored — even if we know that by itself, they will not be enough to solve the problem. Russian food and fertilisers must have unrestricted access to world markets without indirect impediments.

“I have been in intense contact on this issue with the Russian Federation, Ukraine, Turkey, the US, the European Union and several other key countries. I am hopeful, but there is still a long way to go. The complicated security, economic and financial implications require goodwill on all sides for a package deal to be reached.”

Ukraine is set to lose 24m tonnes of grain export potential, mainly corn and wheat, in the 2022/23 season, because of infrastructure damage, limited workforce, and lack of ability to move volumes from storage to ships as the main ports are closed, Russia will however gain, increasing exports by some 7.5m tonnes.

The overall impact to dry bulk shipping is a slight drop in tonne-miles, which fall sharply for global corn trades, but this is partly offset by gains for wheat and soyabeans, according to a shipbroking research analyst

Only limited amounts of grain are being sent abroad, by rail to Poland and Romania, while small amounts are leaving from other ports in Ukraine, where the first grain shipment was made in early May.

According to Lloyd’s List Intelligence data, there have been 60 sailings from Reni so far this month, with 50 from Izmail. That compares with January’s figures of 41 and 13 sailings from the respective ports.

A spokesperson for the International Maritime Organization said that there was strong international support to see grain shipments from the Ukraine.

“We need to ensure that any move does not endanger seafarers, some of whom remained trapped in port,” said International Chamber of Shipping secretary-general Guy Platten. “Any initiative, including the one to create ‘Blue Corridors’ being led by the IMO does not put our seafarers at risk.”