Have we reached peak uncertainty?

Russia’s invasion of Ukraine will require a recalibration of trade lanes, but it is unlikely to dampen demand and seaborne trade will adapt. Even so, there are more downside risks than upside potential for shipowners to latch on to beyond the current cycle

Lloyd’s List’s latest shipping health check remains largely unchanged from the last quarter, but the uncertainty that lies beyond requires strategic thinking, not procrastination. Shipping may have reached peak uncertainty, but we could now be approaching peak everything 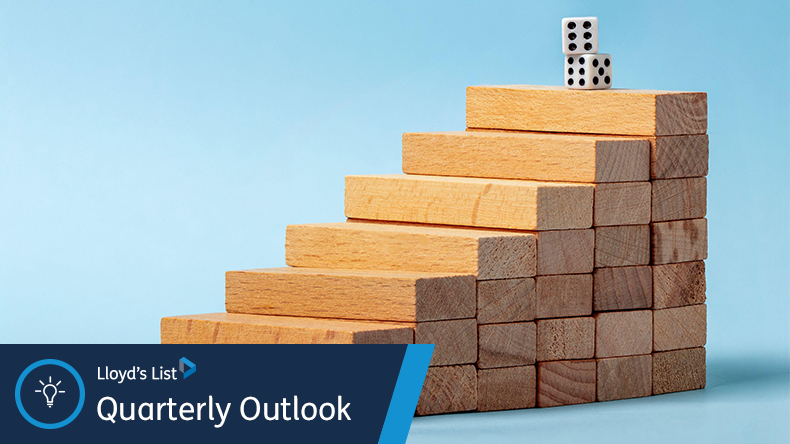 Source: Vahit Özalp/Alamy Stock Photo We have reached peak uncertainty in shipping right now and, if we look longer term, the peak trends only continue.

EVEN before Russian tanks started rolling into Ukraine, there were storm clouds on the horizon for shipping.

The cost of capital is moving up and inflation is looming large for the post-pandemic economy. For all the confident talk of a soft landing from fiscal wonks, the prospect of a recession is likely.

Globalisation’s engine is stalling. China’s economy is going to struggle to hit 5% this year and oil imports may fall again, having dipped in 2021 — the first contraction for 20 years.

China’s property market is riddled with risk and its slowing construction industry has resulted in lower steel output as demand for the metal plateaus.

Add in the recalibration of world trade as Russia is unplugged from the global economy and it becomes clear that there are more downside risks than upside potential for shipowners to latch on to beyond the current cycle.

Container line profits continue to soar as a resolution to supply chain chaos moves ever further into the future.

Yes, things are cooling off slightly, and the lines are paying hugely inflated sums now for vessels that were being scrapped three years ago on the basis that they were uneconomical and technologically obsolete.

However, with freight rates still eight to 10 times above the long-term average, the party is not over yet.

Dry bulk is still set for a very positive year, particularly the nicely positioned geared tonnage. Regardless of minor fluctuations in demand, the limited supply and lack of deliveries mean the stars are still aligned for this year, at least.

And tankers… well, tankers remain cursed to suffer successive failed recoveries and, after 18 months of losses, rising bunker prices are causing even more problems for operators.

The only mystery that remains is how so many very large crude carrier operators have avoided going under — and why so many people are ordering.

Yet shipping does not tend to think in such short-term time frames and oil diplomacy thinks even longer term.

In a tight market, shocks are hard to absorb and the current scramble for energy recalibration will hurt — but it will recalibrate.

Some of Russia’s oil exports will be lost, but much will ultimately be redirected. Refiners in India, China and other markets will happily buy discounted oil from Russia, and commodity traders will hold oil in storage and sell volumes to third-party buyers.

The oil politics playing out is less about the immediate shortfall and more about the long-term energy security of petrostates retaining power.

As Bloomberg’s energy guru Javier Blas pointed out recently, the next economic recession — which may come as early as this year — could push the oil market into oversupply.

In Riyadh, no one thinks that Iranian or Venezuelan oil — which remain under American sanctions — will stay outside of the market forever. The very same market that is screaming for extra supply today may eventually need production cuts.

Russia’s invasion of Ukraine is an undoubted economic shock that will require a global reorientation of trade lanes and spark market turbulence that is currently unknowable, but in seaborne trade terms, demand will not disappear significantly.

What has disappeared — for shipping, at least — is any certainty about how to plan amid the immediate volatility and the apparently endless flock of black swans disrupting the market.

While the current oil supply shock may act as a catalyst toward a fossil fuel-free future for governments ruing the folly of relying on Russia and its autocratic peers for energy security, the immediate response has been a global scramble to find more oil and gas.

So much for last year’s promise of rapid decarbonisation.

Translating that uncertainty into shipping strategy means the existing procrastination from the market on how to meet efficiency goals will only be extended.

We have reached peak uncertainty in shipping right now — and, if we look longer term, the peak trends only continue.

As a percentage of GDP, trade has peaked and growth is declining. That may sound overly alarmist, given the current container situation, but as a share of the world economy, trade in manufactured goods peaked amid the financial crisis in 2008.

So while the pandemic has given a temporary boost to goods exports, as consumers unable to enjoy vacation trips and concert tickets spend on furniture and food processors instead, the long-term trend is unchanged.

The economists and historians will argue about the timing, but it seems likely that we have lived through peak globalisation and the long-mooted transformation towards regionalisation is looking less and less like an outlier theory.

The Lloyd’s List Podcast: The next phase of globalisation

The era of the long-distance value chain was waning long before Trump, Brexit and the coronavirus pandemic, and the current congestion and supply crunch have only further exposed the fragility of the just-in-time threads that hold the global economy together. What happens next will define shipping trade lanes and the industry itself. The renowned historian, economist and author Marc Levinson...

Have we reached peak economies of scale for shipping? Given the increasing tendency of Evergreen’s 23,000 teu behemoths to get stuck, it seems unlikely that anyone will want to risk grounding in the Malacca Strait for want of an extra few thousand boxes.

Besides, if the world is breaking up into regional blocs, then smaller, more flexible ships, built for shorter distances and more frequent green-fuel stops, would suggest that a cap on scale is going to be as much a factor of market economics as it is engineering.

Also, peak fossil fuels is now less a question for those future-gazing summits and more a question of current strategic boardroom thinking. Peak coal seems to be done and dusted, although the length of that long-term decline could be considerable.

Those perennial predictions of peak oil will once again be recalibrated in the wake of the latest energy crisis, but even the most optimistic tanker operators are well aware that they are likely ordering the last generation of VLCCs.

The ultimate peak consideration, of course, is always going to be demographics.

A recent study suggested that the pandemic may have brought forward the projected date of peak global population by as much as a decade — into the 2050s.

Such predictions vary more than brokers’ valuations, of course, but the University of Washington concluded last year that the world population will fall in the last third of this century, to 8.8bn by 2100.

If the population isn’t growing, then the world is going to enter a long-term period maybe not of negative growth, but certainly of lower growth rates.

And, while it is something of a leap from the current volatility and geopolitical turmoil to deglobalisation, there are now pertinent questions to be considering over the lifetime of shipping’s investment cycle.

So, does the current volatility mean that we have reached peak uncertainty for shipping as it considers an opaque future? Probably yes, but perhaps we have now reached peak everything.

This article is part of Lloyd’s List’s Quarterly Outlook, which can be viewed in full here. Subscribers can also access and download a PDF copy of the report.

Containers: Box carriers expect more of the same in 2022