UK measures over P&O Ferries sacking will have limited impact

Government could unilaterally have extended UK minimum wage level to ferry seafarers serving British ports but chose not to do so, says employment lawyer

‘The government could have made that change if they wanted to, but the decision recognises that even in a post-Brexit world, for any change to be meaningful they need to work with governments at the other end of the ferry route,’ says Reed Smith partner 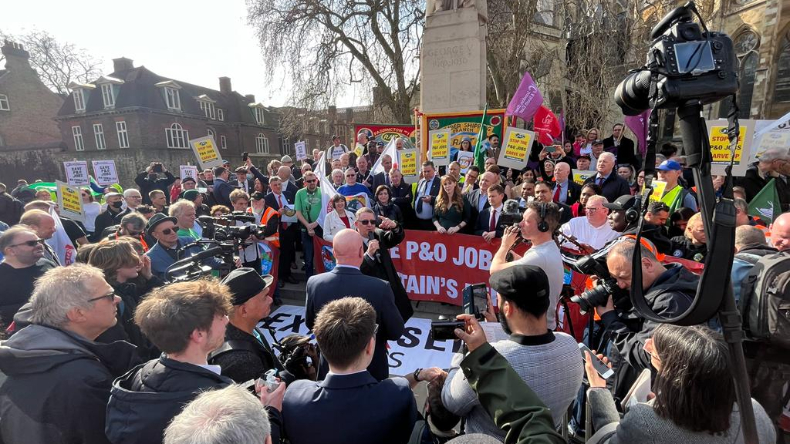 Source: International Transport Workers’ Federation (ITF) The changes will likely have zero impact for the P&O employees who were dismissed because many of them have already signed termination agreements.

THE package of government measures introduced by the UK in the wake of the mass dismissals at P&O Ferries will have little practical impact on operators and none whatsoever for most sacked workers, according to legal experts.

The proposals announced by transport secretary Grant Shapps in parliament would mean the UK taking a lead in pushing for an international minimum wage for seafarers, and negotiate “minimum wage corridors” with governments in countries linked to Britain by ferry services.

Mr Shapps also promised primary legislation giving ports powers to ban operators who pay below the national minimum wage and has written to ports asking them to do so voluntarily pending its enactment.

‘My message to P&O Ferries is this; the game is up. Rehire those who want to return and pay your workers — all of your workers — a decent wage,’ Grant Shapps tells parliament

Reed Smith employment law partner David Ashmore pointed out that the government did not simply decree that all ferry operators serving the UK have to pay the same minimum wage as applies to all land-based jobs, which would have been within its gift.

“It’s interesting that the government had pulled back from unilaterally extending UK minimum wage laws to seafarers on ferries,” he said. “They could have made that change if they wanted to, but the decision recognises that even in a post-Brexit world, for any change to be meaningful they need to work with governments at the other end of the ferry route.”

New minimum wage laws are still needed, as without a minimum floor, ferry operators can gain a competitive advantage by driving down pay levels.

If agreement on pay thresholds is now reached with France, Denmark, the Netherlands, Ireland and Germany, that would take employment law in an entirely new direction, as pre-Brexit EU-derived employment law never regulated pay.

Mr Ashmore also said the changes will likely have zero impact for the P&O employees who were dismissed, because many of them have already signed termination agreements in return for enhanced severance. Nothing in the proposals unwinds those arrangements.

“The government is tightening up employment law in response to the P&O backlash, proposing an additional 25% penalty on top of the existing punitive sanctions where an employer deploys fire and rehire tactics without first having made reasonable efforts to reach agreement through consultation in line with a code of practice.

“It is not clear if this 25% penalty applies to information and consultation claims, or unfair dismissal claims, or both. If the increase is subject to existing caps on financial penalties, that change will have little impact for many staff.”

Professor Helen Sampson, director of the Seafarers International Research Centre at Cardiff University, said P&O ferries’ move came as no surprise to those who have advocated fairer conditions for seafarers in the UK for some time.

In particular, she pointed to shortcomings in the enforcement of national minimum wage regulations on vessels to which they already apply.

In 2016, for example, the matter was raised in parliament in connection with a ferry service between Aberdeen and Lerwick. In 2017, a working group was convened to explore the issues.

As a result, the National Minimum Wage Act was in 2020 extended to all seafarers working in UK territorial waters or in connection with specified offshore activities in the UK sector of the continental shelf.

“This amendment did not go so far as to include seafarers who worked on ferry routes between the UK and non-UK countries, however,” she said. “This is a problem which requires immediate action. It can only be hoped that further legislative changes are rapidly made to alter the situation for UK seafarers working out of all domestic ports.”