China export trade faces delays due to slower trucking and port services. Shippers are already moving cargo to the US east coast in anticipation of drawn-out port labour negotiations to come on the west coast 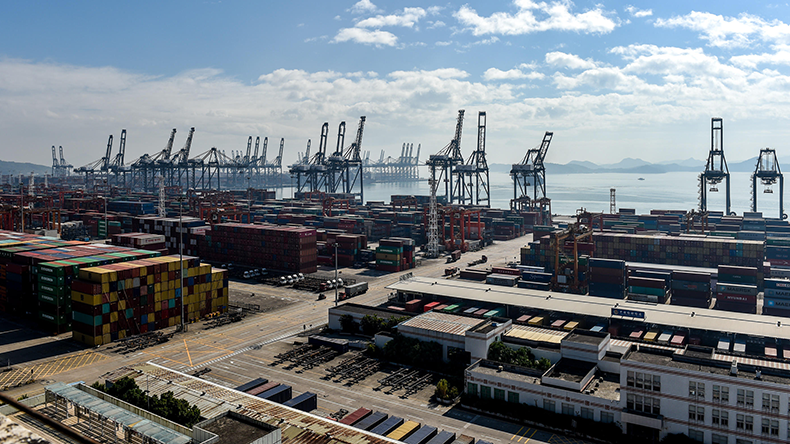 Source: Mao Siqian / Xinhua / Alamy Live News With coronavirus restrictions in China, containers shipping carriers have warned of longer waiting time in ports such as Shenzhen’s Yantian (above) and Shekou.

SHIPPERS are bracing for greater supply chain disorder amid fallout from China’s lockdown measures and US port labour negotiations.

Strict coronavirus control rules which have been implemented in many parts of China have impacted the industry at a time when cargo owners and carriers are prepared to kick off the main season for shipping produce between April and July.

“This time of the year is crucial for most companies as they begin to ship fresh production in preparation of the early peak season,” Container xChange said in a report. “Lockdowns in China will not just be a production slowdown, but also a slowdown of cargo movement, both being detrimental to the supply chain.”

With factories forced to close and travel restrictions in place, trucking and port services are already being disrupted.

Containers shipping carriers have already warned of longer waiting time in ports such as Shenzhen’s Yantian and Shekou.

Ocean Network Express chief executive Jeremy Nixon said the strict precautionary measures in some important port Chinese cities, such as Shenzhen, Shanghai and Ningbo, had led to pullback in bookings and delays in vessels berthing.

“We’re still getting our head around that to see how significant... and how long that’s going to be.”

As of March 23, there are 113 boxships at anchor off the two ports, up from 88 tracked two days ago.

The vessel queue outside Shanghai-Ningbo and Qingdao has edged down to 120 and 21 vessels respectively.

If the lockdowns and resultant congestion persist in China, the world’s factory, there will be an impact on US shipments.

Additionally, negotiations over contracts between the longshoremen unions and ports on the US west coast, which are set to expire at the end of June, could also prolong the port congestion and complicate China-US traffic.

“The feedback from our North American colleagues, the ports industry and many of our customers is that expectations are not so high that [the issue] can be resolved easily,” said Mr Nixon. “We may see some slowdown in productivity or delays associated with the [union] negotiations during June, July and August.”

He added that his customers were already trying to get ahead of the curve by bringing in more cargo to the east Coast, which is now a strong driver for booking demand.

Mr Schlingmeier said shippers should plan their cargo much further in advance this year owing to the potential risks at both sides.

“Going by the analogy that the containers from China will make their way to the US ports around the same time in July-August, they will be bound to face worsened congestion at the US west coast ports, as well as at the east coast ports which are already struggling to handle the traffic.”