As an estimated 1,500 people on about 100 ships are believed stranded in Odessa and other ports, seafarers’ charities have launched an emergency appeal 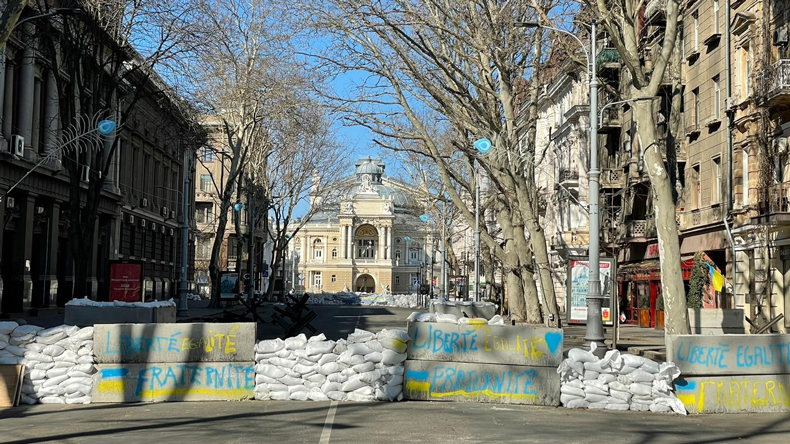 Source: Human Rights at Sea A roadblock in front of Odessa's opera house. The city is quiet as defenders prepare for Russian attacks, says HRAS.

CONDITIONS are being described as dire for around 1,500 seafarers believed to be trapped in Odessa and other Ukrainian ports.

Crews of mixed nationalities remain stranded on board ships, though governments have helped some of their own nationals to leave.

Human Rights at Sea chief executive David Hammond, who returned from Odessa at the weekend, said crews living in fear had shown an “immense amount of courage”.

“There’s issues with owners running cold ships and crew still being on board with burst pipes and flooding of accommodation. There’s real concern about the crews getting out. There’s concerns about owners putting the cargo before the crew.”

Charities were also concerned for the wellbeing of Russians caught in the conflict amid xenophobia towards them.

“The shipmanagers, the lawyers and even the union officials we spoke to cannot get access to the ports,” the former British Royal Marine said, adding these were “utterly locked down and full of weaponry”.

“Reports suggest that there are around one hundred vessels trapped in Odessa,’’ according to Human Rights at Sea. “Ships have been sunk, civilian seafarers have been killed, and hundreds have become stranded in Odessa and other ports of southern Ukraine, trapped by the full force of the naval blockade that Russia has imposed on the region.

“The ships and seafarers affected are, in most cases, neither Ukrainian nor Russian — although innocent seafarers from both countries have been badly affected by the conflict. The majority of ships are registered with states that are legally neutral in relation to this war.’’

Mr Hammond said a chief officer he spoke to described seeing an aircraft shot down about 150 metres from his ship. Ships could not leave because of the possible threat of mines.

Over time the inability to get Ukrainians home from around the world, or out of Ukraine to join ships, would hurt their longer-term job prospects.

Separately, a group of maritime charities have launched a Ukraine crisis appeal through the Seafarers International Relief Fund, originally created for Covid relief.

“The maritime industry is impressive when it comes together to help their own, and we hope that it will once more generously donate to the SIRF,” said Catherine Spencer, chief executive of the Seafarers’ Charity.

She said grants had been made to the International Seafarers’ Welfare and Assistance Network and the Ukrainian Maritime Transport Workers Trade Union.

International Chamber of Shipping secretary-general Guy Platten is urging the industry to donate.

“Our number-one priority is the safety of our seafarers and their families," he said. "Ships and their crews in the area are under threat, while seafarers with families in Ukraine are rightly concerned."

Funds will go to basic needs including food, shelter, transport and access to medical help.

Shedding light on suicides at sea