Sacking 800 loyal seafarers on the spot is unacceptable, and brings shame on our industry

DP World boasts of being a ‘Great Place to Work’; the international shipping community must carefully consider whether this is the kind of workplace champion it wants to embrace 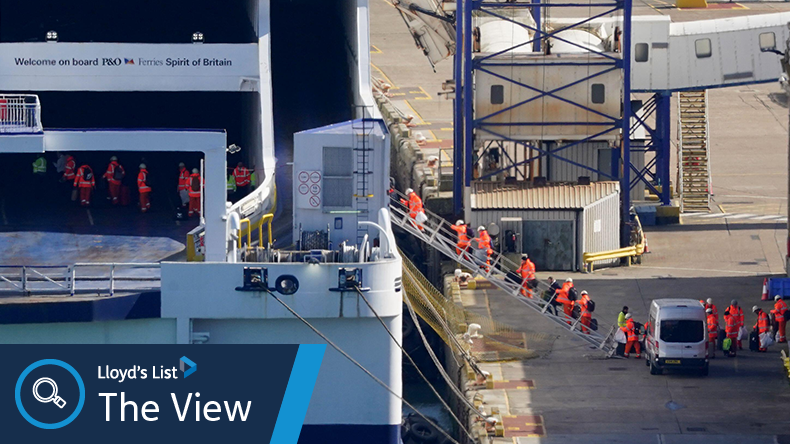 DP WORLD’s decision this week to sack 800 of its UK-based P&O Ferries employees on the spot, without notice and over Zoom, had all the hallmarks of a carefully orchestrated, military-style, stealth operation.

Cheaper agency staff waited in buses to replace officers and ratings as security staff equipped with handcuffs led loyal seastaff off their ships.

This, from a company which made $1.16bn in profit over 2021, marks a throwback to the worst of the shoddy, despotic and abusive employer practices of the past. Such grubby behaviour taints all those who condone it.

This casual snub to the employment rights people rightly expect in a liberal democracy blindsided the government, the seafarers themselves, and the unions that represent them. It has turned P&O Ferries into a toxic brand overnight.

So reprehensible is this conduct that even Lionel Barber, a former Financial Times editor, contends that it gives capitalism a bad name.

The UK Chamber of Shipping should be the public voice of our sector. Yet its handling of the development has been surprisingly tone deaf.

We remember the Chamber’s howls of righteous indignation during the crew change crisis, when it highlighted the terrible treatment faced by 400,000 seafarers stuck on ships beyond their contracts. But apparently, it’s okay to sack them with scant regard to contracts when one of its own members is the one responsible for the treatment of seafarers variously described in the House of Commons yesterday as “scandalous”, “brutal” and “unacceptable”.

UK transport minister Grant Shapps may believe this is “no way to treat employees in the 21st century”, but P&O Ferries justifies its actions by pointing out a $100m loss in the past year after being pummelled by the pandemic backdrop. It has declined to expand on how much it will save by bringing in cheaper agency staff, or whether it will return the substantial government subsidies it picked up by way of the furlough scheme.

Other operators in the perennially low-margin ferry business are in a similar predicament, but have not resorted to naked authoritarianism to address financial problems.

Respected companies such as Cyprus-based shipmanager Columbia Shipmanagement have been caught in the crossfire. The company’s Latvia division was recruiting for European Union seafarers as recently as this week to join passenger vessels from March 17, the day P&O Ferries executed its sack-and-replace offensive.

It is unlikely that Columbia knew the circumstances in which those seafarers would be used by DP World. But its continued involvement surely risks collateral damage.

Officer union Nautilus International named Malta-based International Ferry Management as also being involved in supplying alternative labour. The company was established in February 2022, in preparation for the DP World plans.

There is now a question mark over whether DP World is a fit and proper business to provide technical and strategic expertise as part of the UK government’s Transport and Advisory Group.

And will DP World, which also owns the London Gateway facility on the Thames and operates Southampton’s container terminal, decide that a similar race to the bottom approach to staffing at those terminals could boost its bottom line? It is worth noting that both are partners in local Freeport consortia that will benefit from tax-free economic zones.

On its website, DP World boasts of being certified as a “Great Place to Work” employer. The international shipping community must carefully consider whether this is the kind of workplace champion it wants to embrace.