During the pandemic backdrop, P&O Ferries received millions of pounds from UK taxpayers to carry freight and protect jobs. DP World made $1.16bn in profit over 2021

UPDATE: UK ministers are reviewing all P&O Ferries contracts and inspecting vessels after questioning the legality of the company’s decision to sack 800 workers. UK transport minister Grant Shapps has urged the company to pause redundancies while he reviews whether P&O followed correct and legal processes so the government “can consider if further action is appropriate” 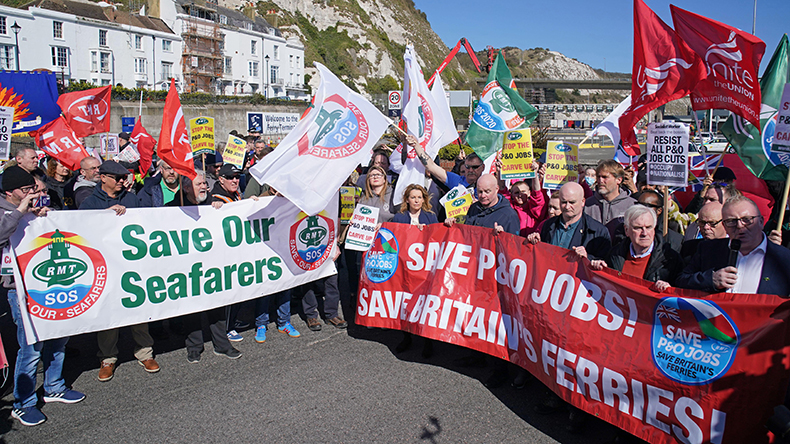 P&O FERRIES and its Dubai-based owner, DP World, are facing demands to repay millions of pounds paid in state aid by the UK government during the pandemic after 800 seafarers were sacked without notice and replaced with cheaper agency staff.

Amid protests staged by workers, unions and public supporters on Friday, UK government ministers stepped in with demands for P&O to pause redundancies and the promise that all P&O Ferries contracts across government would be subject to immediate review.

In a letter sent to the company on Friday, Mr Shapps said he was “deeply concerned” at the move and questioned whether it was legal. He also urged the company to pause the redundancies announced and instructed the Maritime and Coastguard Agency to inspect all vessels to make sure replacement crews “rushed through” were safe to go to sea.

Separately, the government has instructed the Insolvency Service to look at the laws around notification requirements to see if P&O followed correct and legal processes so the government “can consider if further action is appropriate.”

Meanwhile, business secretary Kwasi Kwarteng also demanded answers to a series of questions sent directly to P&O Ferries management where he said the company “appears to have failed” to follow the correct process for making large-scale redundancies. The letter reminded P&O Ferries chief executive Peter Hebblethwaite that failure to notify the Insolvency Service and the Redundancy Payment Service is “a criminal offence and can lead to an unlimited fine”.

Mr Kwarteng’s letter, which asks for a response from P&O Ferries “no later than 5pm on March 22, demanded details of the consultation process and stated that a formal complaint to “the relevant prosecuting authority” may still follow.

Staff were dismissed on Thursday via a video call as security guards trained in using handcuffs were called in to march them off their berthed ships.

The company says its fleet will remain in dock and that services “are unable to run for the next few days.” It is believed the vessels have been removed from service while the new agency crews are being trained on them.

In a new statement on Friday, P&O Ferries said: “We took this difficult decision as a last resort and only after full consideration of all other options but, ultimately, we concluded that the business would not survive without fundamentally changed crewing arrangements, which in turn would inevitably result in redundancies.”

The move has sparked bitterness and anger, with sacked staff attending protests at ports in Dover, Liverpool and Hull.

P&O, which operates four passenger routes between the UK and Europe, claimed its decision was unavoidable amid £100m ($131m) in losses in the past year.

James Heappey, the armed services minister, called on P&O Ferries to return £10m handed to it by the UK government to protect jobs under its taxpayer-funded furlough scheme.

P&O Ferries sacked 800 staff without notice and replaced them with agency staff, saying the company’s survival depended on it after a £100m loss year on year. An opposition lawmaker branded the move ‘downright disgusting’

Opposition Labour lawmaker Karl Turner, whose Hull constituency is on a P&O Ferries route to Rotterdam, said the government should suspend any contracts it has with the company and claim back the money that was used to help the company during the pandemic.

“P&O’s decision yesterday to sack the crew of Pride of Hull (IMO: 9208629) and on other ships up and down the country, without warning, notice, or consultation, is downright disgusting,” he said in a Twitter post.

Unions have named Columbia Shipmanagement as one of the agencies providing replacement crews. Job advertisements with CSM logos were shared on social media. The company has declined to comment.

“In general, our members have managed through the pandemic by a variety on means, which have included financial aid from government, reducing service/crewing levels and absorbing losses that are unsustainable over the long term,” he said in an email.

UK maritime minister Robert Courts told Parliament he was “extremely concerned and frankly angry at the way workers have been treated today by P&O”.

He said the backdrop of lockdown had devastated the finances of many travel companies, including P&O.

Company says that despite its other efforts, it is now clear that right-sizing the business is necessary to create a viable and sustainable P&O Ferries to get through the coronavirus outbreak

“While their finances are matters for them, and them alone, to take, I would have expected far better for the workers involved,” he said.

Neil Roberts, head of marine and aviation at the Lloyd’s Market Association said: “Whether or not it turns out to be legally permissible to dismiss 800 seafarers without notice, this ruthless act surely cannot be allowed to pass without a government rethink on the ethics and benefits of foreign ownership of national assets.

“This type of calculated and pitiless treatment of loyal staff offends something deep-rooted in the British psyche. Whatever the economic arguments, it is to do with fairness and common decency.”

Officers’ union Nautilus International is exploring whether P&O Ferries acted illegally and said that crew members should know their rights before signing redundancy deals. It has invited its members to fight back against so-called fire-and-rehire policies and join protests being planned against P&O Ferries.

It has accused the company of acting “unlawfully and immorally” in failing to provide any notice about the redundancies and failing to engage in any consultation process.

“Nautilus International now considers itself in dispute with P&O Ferries,” the union said in a letter to P&O Ferries.

“The government should nationalise these vital ferry routes which allow people and goods to get to and from our country — P&O must be hit where it hurts!” general secretary Manuel Cortes said in a statement.

Call comes as the company confirms that over 1,000 seafarer positions are to be axed in Dover and Hull

“If what happened yesterday turns out to be legal, then it is imperative the law is changed so that it no longer is. Everyone is appalled at yesterday’s actions — they must not get away with it and it must never be allowed to happen again.”

Defending its job cuts, the company said its losses were “not sustainable”.

“P&O Ferries plays a critical role in keeping trade flowing, supply chains moving, and connecting families and friends across the North and Irish seas and the English Channel,” it said. “We have been at the heart of this service for years and we are committed to serving these vital routes.

“However, in its current state, P&O Ferries is not a viable business. We have made a £100m loss year-on-year, which has been covered by our parent, DP World. This is not sustainable. Our survival is dependent on making swift and significant changes now. Without these changes, there is no future for P&O Ferries.”

Parent company DP World announced record full-year results in the past week, including a 26.3% increase in revenue to $10.7bn. It paid investors a £270m dividend in May 2020.