Zvezda Shipbuilding Complex not named on EU list but future of its LNG orderbook, for which Samsung Heavy Industries is providing technology, blocks and equipment, is now uncertain 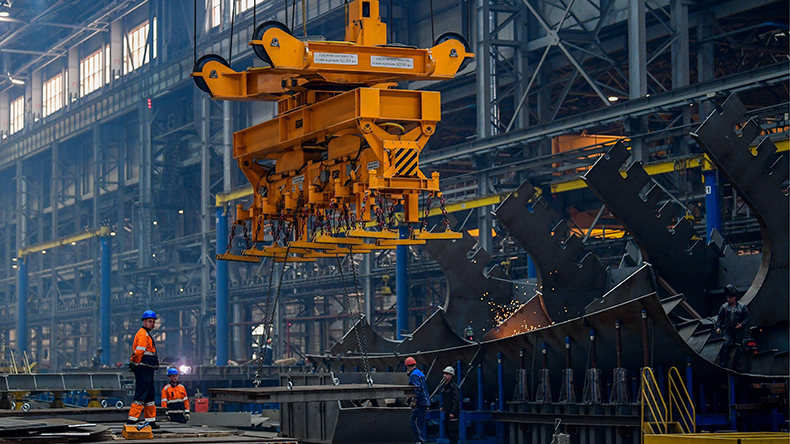 Source: ITAR-TASS News Agency / Alamy Stock Photo Zvezda Shipyard in Bolshoy Kamen in Russia's far east. While the yard has not been directly sanctioned, it is connected to sanctioned entities.

MARINE service providers and equipment providers supplying Russian shipyards have been caught in the crosshairs of fresh European Union sanctions on Russia which saw the blacklisting of the country’s government-owned shipbuilding conglomerate.

The named oligarchs and Russian businesses on the list published on March 15 include JSC United Shipbuilding Corp, an umbrella organisation for some 40 military and commercial shipbuilding and repair yards.

Helsinki-headquartered engine manufacturer and supplier Wärtsilä has a long-standing joint venture in Russia that spans 130 employees in offices in Moscow, Vladivostok and Murmansk, according to its website. On March 4 Wartsila announced, via social media, that it had suspended all deliveries to Russia.

The EU designation on United Shipbuilding adds a further degree of complexity for companies that provide marine services and equipment across Russian yards or have joint venture maritime arrangements in Russia.

It also focuses attention on the Zvezda Shipbuilding Complex, which was not directly named in the list of sanctioned shipyards but is connected to sanctioned entities.

The complex in Russia’s Far East is relying on Samsung as it constructs 14 ice-class liquefied natural gas carriers for Russian energy company Novatek for the Arctic LNG 2 project. Novatek holds a 60% stake in the project. The first three keels have been laid.

Zvezda describes itself as a limited liability company formed in 2015, but is generally regarded as controlled by Rosneft and directly connected to chief executive Igor Sechin, who is overseeing the development of the complex and a maritime complex in the region to reestablish a domestic shipbuilding industry.

Sechin has been sanctioned in the US, EU and UK as an ally of Vladimir Putin.

Zvezda assembled and built a series of LNG-fuelled aframax tankers for Sovcomflot using South Korean technology and support. The tankers commenced trading over the past two years.

The future of the LNG carriers at Zvezda which have not been financed is under question given the expanding and evolving sanctions from western nations that encompass energy companies, banks, and now shipyards.

The LNG carriers will be chartered to Russian shipowner Sovcomflot under long-term leases, with construction prices estimated at between $260m and $290m each. Sovcomflot is already subject to financial controls in the UK with the EU sanctions matched yesterday.

Other maritime technology and equipment suppliers in Europe connected with Zvezda include France-based engineers GTT.

Germany company Siemens and General Electric have all signed cooperation agreements since 2016, according to an academic paper published by the Changing Character of War Centre at Pembroke College, Oxford.

GTT, which specialises in membrane containment systems for LNG, signed a technological and licence agreement with the Zvezda complex in June 2020, according to its website. Dutch firm Damen has a joint venture related to ship construction, the paper said.

The other listed shipyard was JSC Zelenodolsk Shipyard.