Recent decades have seen doing business with Russia become unexceptional, especially for those in shipping. That could be about to change

Trade relations may soon come to resemble those of the Cold War we all thought we had left behind long ago. The last time the world can remember similar was when Lennon and McCartney were in vogue 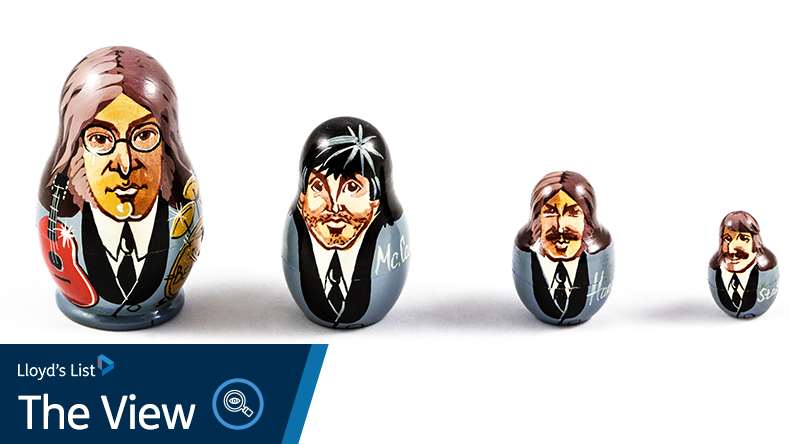 Source: Fabrizio Robba / Alamy Stock Photo Like The Beatles’ tune, the world of shipping may not be — quite — back in the USSR yet. But it may not be far off it.

YOUNGER listeners probably won’t quite get the musical joke that underpins the Beatles’ classic Back in the USSR.

But penning a pastiche Beach Boys fun-in-the-sun ditty about a place routinely touted as the epitome of grim repression was itself an eminently satirical statement from Lennon and McCartney.

The Soviet Union collapsed 23 years after the Fab Four recorded the tune. The Russian Federation became, if not quite a ‘normal country’, at least somewhere with which it was unexceptional to do business.

Classification societies had been holding off from withdrawing class from Russian controlled vessels, but with Lloyd’s Register the first to pull out and DNV following suit, pressure is mounting on the rest of IACS societies to take a position. An exodus of class services could leave thousands of vessels unclassed, uninsured or moving services swiftly back to Russia

A fair few will have visited Russia for work, perhaps for an appointment at Sovcomflot’s imposing headquarters in Moscow, or a look round any of the impressive modern container terminals operated by Global Ports.

In short, Russians in shipping have for decades been our colleagues and friends, even when there have been tensions between their government and our governments.

Vladimir Putin’s decision to launch a brutal and unprovoked invasion of Ukraine will inevitable entail dramatic — and probably enduring — change.

Lloyd’s Register is starting to withdraw class from Russian controlled, owned or managed ships, while DNV is not taking new business.

Meanwhile, the International Association of Classification Societies is considering its response to the European Union’s decision to subject state-owned Russian Maritime Register of Shipping to sanctions.

While the sanctions seemingly do not necessitate expulsion, other IACS affiliates will be mindful of the political and reputational implications of allowing RMRS to stay a member.

Like IACS, the International Group of P&I Clubs has also been working out what to do, but has chosen not to make its conclusions public.

Clubs have traditionally averted their gaze from human rights records, providing cover for vessels flagged in democracies and dictatorships alike.

Iran is the obvious precedent here; clubs stopped providing cover to Iran’s big two, NITC and IRISL, when precluded from so doing, and will of course take the same stance if Russian shipping faces similar stipulations.

Other marine insurers have responded by writing war risk insurance at the sort of 5% pricing that is the accepted norm for hot shooting wars.

Given that war risk insurance exists to insure war risk, the clue being in the name, fair enough. But there have also been instances of what most underwriters consider shameful price-gouging.

Leading open registers are turning away new Russian business. We are not aware of any Russian-associated vessel being deflagged, but in the current climate, that looks rather likely.

The International Salvage Union has suspended a Russian affiliate, citing its links to the Russian state, in what appears a voluntary decision. Similarly, numerous other membership organisations in shipping will have to decide where they stand.

A small number of western maritime companies have commercial joint ventures in Russia. Maersk unit APM Terminals, for instance, is pulling out of the aforementioned Global Ports.

Rotterdam will not be turning back Russian ships, at least for now; British ports have been ordered to do just that. UK ports are apparently expected to conduct due diligence through means no more sophisticated than Google, an approach that fills few with confidence.

Russia accounts for just 2%-3% of world seaborne container trade, and things are unlikely to change much for those in the box game. By contrast, it is very much a petrostate, as tanker owners are well aware.

The US and EU decisions to abjure their oil and gas amounts are already being spoken of in terms of a third oil shock, another got-the-T-shirt phenomenon for older subscribers.

But most of the rest of the 1970s and 1980s were abysmal, marked by the deepest recession tankers have ever seen. Few will be looking forward to a remake.

Russia is also significant in dry bulk, particularly as an exporter of coal, wheat and potash, a vital ingredient in fertiliser.

The world still needs to eat and heat; but if these commodities are selected for sanctions, the impact for bulker owners is expected to be net negative.

The full picture of near future for Russia and shipping is yet to emerge. But trade relations may come once more to resemble those of the Cold War we all thought we had left behind long ago.

Any ageing lawyers out there who can still put together old school barter deals to circumvent banking restrictions may even find such skills once more in demand.