The passage connecting the Black Sea to the Sea of Azov has been blocked for nearly two weeks. Ships are now moving back into Russian territory

Around 200 vessels have been stopped and waiting to pass through the Kerch Strait since the invasion began. Ships, which are predominantly Russian, are now returning home 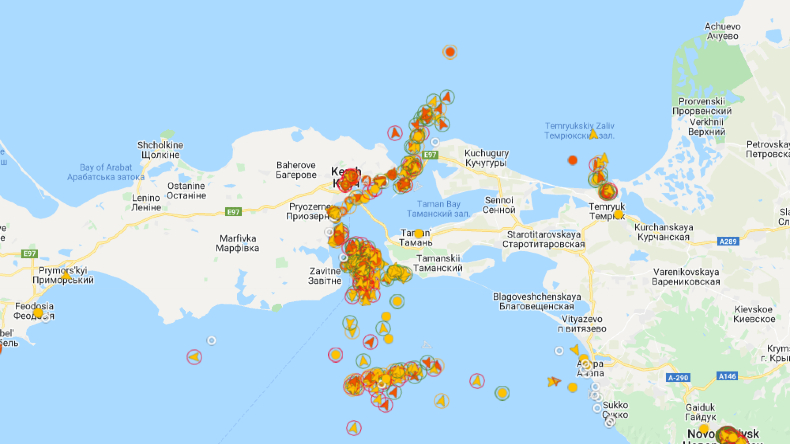 Source: Lloyd's List Intelligence Congestion in the southern inlet has started to ease, but there are still more than 120 ships waiting in this area.

RUSSIAN vessels are heading back into Russian territory, transiting the Kerch Strait which has been closed to commercial ships since the invasion of Ukraine.

At the time of analysis, there was no evidence that traffic was moving south through the strait, which connects the Sea of Azov to the Black Sea.

Lloyd’s List Intelligence data has shown more than 200 ships queuing north and south of the Kerch Strait each day for the past two weeks.


The Ediniy (IMO: 9831622) had been waiting in the southern inlet of the Kerch Strait for nearly two weeks before starting off in the early hours of the morning for Russia’s Rostov port.

The story is similar for Russia-flagged Chelsea-5 (IMO: 9386158) which set off for the port of Azov on March 8, exiting the passage the following morning.

A Malta-flagged, but Russian-linked, general cargoship with container capacity, Amurskiy Zaliv (IMO: 9409754), has also passed through the strait.

According to Lloyd’s List Intelligence vessel-tracking data Amurskiy Zaliv spent two days in the Kerch Strait’s northern inlet before becoming one of the few vessels that was able to pass south during the early days of the invasion.

It called at Romania’s Constantza port from March 2 to March 4, then waited a couple more days in the southern inlet of the Kerch Strait before heading to Yeisk this morning.

Traffic going in and out of the Sea of Azov ground to a halt on the night before the incursion.

Ships have been seen queuing at the southern and northern entrance to the strait since.