Buyers are looking to North and South America for replacement grains volumes, according to the London-listed company, which has a fleet of handysize bulk carriers

One of the company’s handysize bulkers, which was loading corn in Ukraine when the war broke out on February 24, remains at berth. All 21 crew have been safely evacuated with the help of the Indian government 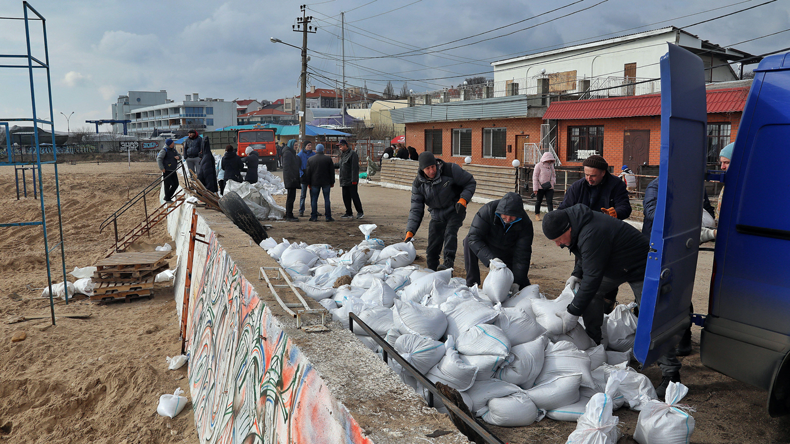 Source: Abaca Press / Alamy Stock Photo Sandbags for defences being filled on an Odessa beach. Taylor Maritime has a bulker trapped in Ukraine.

TAYLOR Maritime Investments, a UK-based handysize owner, is expecting “regional trade turbulence” in the near term as a result of the war in Ukraine.

Based on recent trading history, the company estimates port calls to Ukraine and Russia accounted for under 2%, and 3%, respectively, of total port calls by its vessels, while the commodities carried have been “necessity goods” such as grains, it said.

The company said it had a vessel loading corn at one of Ukraine’s Black Sea ports when war broke out on February 24. With the help of the Indian government, all 21 crew members are “now safely out of the country and will be repatriated to India”, it said.

However, it added that the vessel, which remains on charter and insured, is still at berth in port and, like all international vessels in Ukrainian ports, will be unable to leave.

“We are deeply concerned about the conflict and the tragic loss of life in Ukraine and commend our commercial and technical managers for prioritising our crew’s safety first and foremost,” said chief executive Edward Buttery. “We continue to monitor the situation very closely.”

The company expects that international trade patterns will adapt as demand will need to be satisfied from other sources.

The dry bulk market has continued to strengthen since the Chinese New Year, which has helped asset prices, and the company took the opportunity to offload two vessels, built in 2006 and 2011 for combined proceeds of $33.3m. The sales are expected to complete in the second quarter of the year.

Average spot handysize rates have risen 52% since the year’s low on February 3, closing on Wednesday at $27,096 per day on the Baltic Exchange.

“The underlying fundamentals of the handysize sector remain unchanged with constrained supply side growth and steady demand, potentially supporting earnings,” said Taylor Maritime. “Against an inflationary backdrop, shipping has historically been seen as a hedge as commodity prices, freight rates and, eventually, asset values rise.”