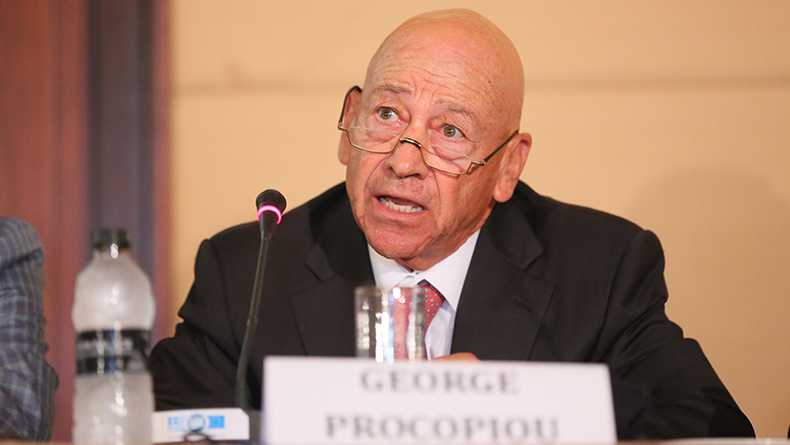 Prokopiou: The Greek shipowner admitted he had been “surprised” by the severity of the crisis.

DYNAGAS founder George Prokopiou has voiced his dismay at the situation in eastern Europe as two of his liquefied natural gas carriers were being diverted away from the UK because of the Russian origin of their cargoes.

The Greek shipowner admitted he had been “surprised” by the severity of the crisis.

“The world has completely changed,” he said. “We must hope for a quick resolution, but we may have to be patient. I hope reason prevails.”

None of Dynagas’ vessels are currently affected by US and European Union sanctions against Russia, he said.

However, there was some confusion over whether intended calls by two Dynagas-managed 174,000 cu m icebreaking LNG carriers at the UK’s Isle of Grain LNG terminal fell under the recently-announced ban on Russia-linked ships calling in the UK.

Unison, the UK trade workers body which represents some of the dock workers at the terminal, had voiced opposition to handling the ships because of the Russian gas on board.

Neither of the vessels will now call at UK ports, Lloyd’s List has been told. The Fedor Litke (IMO: 9768370) and sistership Boris Vilkitsky (IMO: 9768368), are likely to take their cargoes elsewhere in Europe.

While Russia’s energy exports at present are not being directly prohibited by US and European sanctions, the list of retaliatory measures for the Kremlin’s invasion of Ukraine is fast-expanding and being added to by ad hoc boycotts by non-governmental organisations and the wider public across many countries.

Earlier in the week, the UK government announced a ban on any vessel that is “owned, controlled, chartered or operated by Russia”, as well as Russian-flagged tonnage.

A number of companies had urgently been seeking clarifications from the DfT, believing the initial messaging to be “unclear”, one shipping industry source said. The Department for Transport was later quoted as saying the ban was intended to target the vessel itself rather than Russian cargoes.

“We just follow instructions from the charterers,” Mr Prokopiou told Lloyd’s List. “It is important that we find a solution to this crisis soon. On the other hand, everyone needs energy and this energy has to flow, because if energy does not flow it will be worse for everybody.”

The two vessels that briefly came into the crosshairs of UK dockworkers last week are among five Arc7 LNG carriers in the Dynagas fleet that transport gas from the Yamal LNG project, located in northern Russia above the Arctic Circle. They are owned 49% by Dynagas Holding in a joint venture with two Chinese partners, CLNG and Sinotrans, holding the majority.

Dynagas was not the largest operator of the initial 15 Arc7 LNG carriers purpose-built for the Yamal project. That honour went to Teekay LNG Partners, which contracted six, again in a joint venture with Chinese partners.

But its overall exposure to Russian gas exports is as large if not larger than any international shipping group.

Five of its six LNG carriers are long-term chartered to Singaporean affiliates of Gazprom and Yamal.

While the current Dynagas fleet on both the public and private side appears heavily exposed to Russian energy giants, the fleet is evolving, with one of the largest orderbooks of LNG carrier newbuildings of any owner.

In the past two years, Dynagas ordered six LNG carriers of 200,000 cu m capacity from Hyundai Heavy Industries, the only ones of this size on order worldwide.

In recent days the South Korean shipbuilding group announced three more vessels of this size had been ordered by a European owner.

Mr Prokopiou confirmed that the trio are for Dynagas, although the orders remain under “some subjects”.

They would lift the order book to nine units of this unique size, which he is known to believe is an especially attractive one for the US market. The first vessels in the series have already been chartered to US-based Cheniere Energy.