Let's recognise the courage of crews risking their lives in Ukraine

Third engineer Hadisur Rahman became the first seafarer to die in the fighting. Let us hope he is the last, although as things stand, that cannot be guaranteed

Like other globalised industries, shipping is faced with tough choices as a result of Putin’s war, in which considerations of the bottom line must be tempered by morality 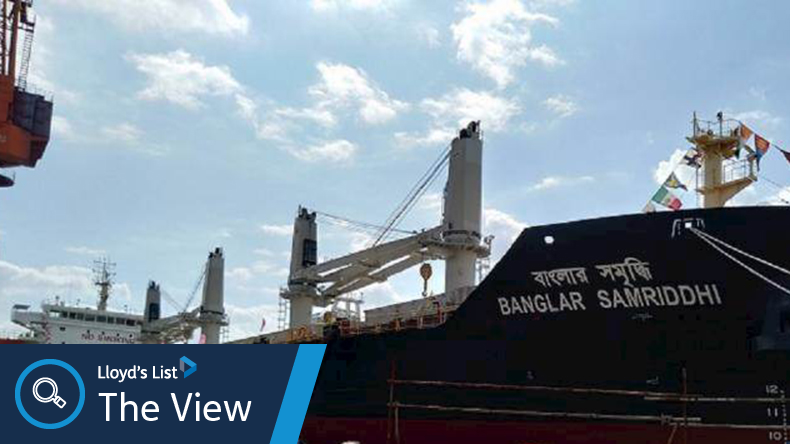 Source: Seasearcher The bulk carrier Banglar Samriddhi on which Hadisur Rahman was serving.

OUR hearts go out to the family and friends of Hadisur Rahman, third engineer on bulk carrier Banglar Samriddhi (IMO: 9793832), who has become the first merchant seafarer to die in consequence of Russia’s brutal invasion of Ukraine.

Mr Rahman, according to media reports from his home country, graduated from the Bangladesh Marine Academy in 2018 and had a promising career ahead of him.

In his last phone call to his parents, he said he could hear the sound of shelling and gunfire in the distance, and that he was desperate to return home to start work on the construction of a dream home for the family.

He never made it. Later that day, his life was cut tragically short in consequence of Vladimir Putin’s entirely unwarranted and unprovoked war of aggression.

We single out Mr Rahman because we are specialist shipping publication. The fatalities from the conflict already run into the thousands, and this grim tally seems certain to go far higher.

While our coverage has centred on this business implications of the fighting, his death is a reminder that, ultimately, there are things far more important than the profit and loss accounts of shipping companies.

As a consequence of that decision, shipowners have been asked to give seafarers the option to disembark prior to entering the area, or to receive increased pay if they agree to serve, and to insure their individual risks.

This is as it should be. Those willing to put themselves in harm’s way can at least expect their courage to be properly remunerated, at levels that in the case of officers and ratings from developing countries can hardly be considered excessive.

Like all other globalised industries, we are faced with tough choices as a result of this war, in which considerations of the bottom line must be tempered by morality.

AP Moller-Maersk, Ocean Network Express and others have put all bookings to and from Russia on hold.

Some of the big trading houses — not previously hailed as willing votaries of Kantian ethics — have issued statements unconditionally condemning the war, suspending operations in Russia, and pledging financial support for charities aiding Ukrainian refugees.

Lawyers believe that the situation has reached sufficient severity for the BIMCO war risk clauses Conwartime and Voywar to kick in, giving owners the right to refuse orders to call at ports where they are fearful for their ships or crews.

Others are complying with sanctions. The West of England P&I club has ceased to cover two feeder boxships because they are financed by the leasing arm of a sanctioned Russian bank.

From what we have been able to ascertain, the International Group is in consultation over its response, although at this stage it is not releasing details of its deliberations.

Ukrainian ports are closed to navigation for the duration, at the decision of the local maritime authorities. Ships calling at Russian ports are able to buy war risk cover, mostly for additional premiums of around 1%, but anything up to 5% in some cases.

Global Ports, the Russian terminal operator in which Maersk’s APM Terminals owns a 31% share, has seen its global depository receipts suspended on the London Stock Exchange, along with a long list of other Russian companies.

There is no suggestion that Global Ports, Maersk, or other shareholders in the company have done anything wrong.

The company may even be an inadvertent loser from the war, sanctioned for doing business while being Russian, and there are some indications that it did not see this coming.

Maersk itself is one of the most outward-facing boxship majors, and will be well aware of the reputational risks inherent in this situation.

At times like these, is it enough to do the easy thing of stopping a few bookings to a market that makes up less than 3% of global container trade?

Or should Maersk do the harder thing and divest itself of a stake in a company operating in a pariah state?

Inevitably, the fighting means that maritime trade in the region has significantly dwindled, and many owners will understandably be getting out of their contracts if they can.

Let us hope there are no further seafarer deaths, although that is sadly not a certainty as things stand.

Where trade continues at all, this is only made possible thanks to the courage of the crews, ordinary men and women like third engineer Rahman. They are unsung heroes; we salute them.