Maersk, MSC and ONE are no longer taking Russia bookings. But with cargo already on the water, lines are looking for available terminal space to store containers in the interim 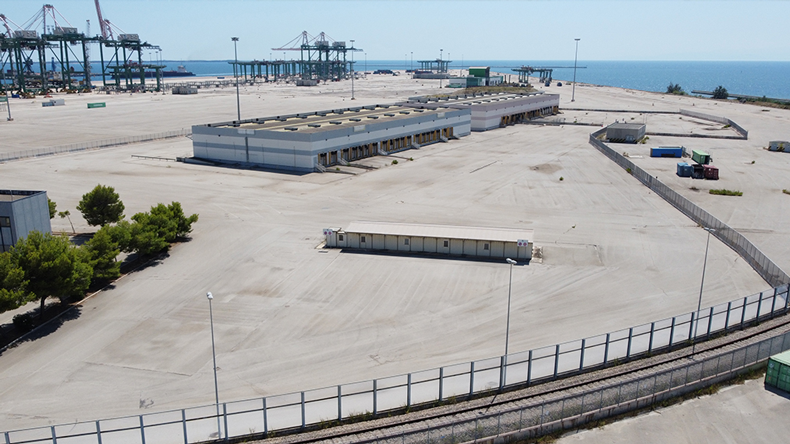 Yiport’s Taranto is offering space for cargoes held up en route to Russia and Ukraine.

MAERSK, Mediterranean Shipping Co and Ocean Network Express have become the latest lines to confirm they will be suspending bookings to and from Russia in response to the ongoing conflict in Ukraine.

“In AP Moller-Maersk we are deeply concerned by how the crisis keeps escalating in Ukraine,” a Maersk spokesperson said in an email to Lloyd’s List.

“We closely follow the ever-evolving situation with government posing new sanctions on Russia and we start seeing the effect on global supply chain flows.”

Maersk said that the “fluid circumstances of regular updates and adjustments” to sanctions against Russia meant it needed time to establish and revise processes for accepting and handling bookings.

“As the stability and safety of our operations is already being directly and indirectly impacted by sanctions, new Maersk bookings to and from Russia will be temporarily suspended, with exception of foodstuffs, medical and humanitarian supplies,” the spokesperson said.

“Our priority is to do our best to handle and deliver as planned all the bookings placed before this announcement subject to sanctions imposed.”

Maersk would still call at Russia, it said, but would only accept bookings that fell into its exception categories.

2M Alliance partner MSC is also introducing a temporary stoppage on all cargo bookings to and from Russia with immediate effect. This will cover services including the Baltics, Black Sea and Far East Russia

Like Maersk, it will continue to accept and screen bookings for delivery of essential goods such as food, medical equipment and humanitarian goods.

“MSC has been closely monitoring the advice from governments about new sanctions, following the February 2022 conflict in Ukraine, and has been operating shipping and inland services to and from Russia in full compliance with international sanctions measures applicable to it,” the company said in a statement.

Ocean Network Express said that the developments in Russia and Ukraine had disrupted its ability to “complete the carriage of consignments” to some destinations and that it would no longer accept bookings for those.

“ONE is working tirelessly to find solutions for those consignments on the water,” the carrier said in an advisory, adding it will continue to provide updates “on any further adjustments to our services to and from the impacted locations as the situation develops”.

With many carriers having cargo on the water already destined to either Russia or Ukraine, the question now is where those can be redirected either for storage or rerouting.

In a customer advisory, Maersk said it was crucial to minimise supply chain disruption and not add to the global congestion in ports and depots.

“For cargo already underway and bookings placed before this suspension was announced, we will do our utmost to deliver it to its intended destination,” it said.

But it warned of “significant delays” as countries in Europe held back vessels en route to Russia to check for restricted commodities and dual-use items.

“The inspections of export and transhipment cargo bound for Russia are related to implementing procedures to comply with sanctions and export controls recently imposed by different jurisdictions,” it said.

Maersk and MSC have made enquiries about offloading containers bound for Ukraine and Russia in Taranto, the southern Italian port operated by Yilport.

Yildirim Group head and Yilport co-chief executive Robert Yildirim told Lloyd’s List that Taranto had the space to store containers until they can be delivered to their final destination, and that the 2M alliance partners were considering the option of dropping off boxes there.

One of Yilport’s Turkish facilities, at Gemlik in the Sea of Marmara, had received requests from several lines to store up to 10,000 containers until they can be safely shipped to Ukrainian or Russian ports in the Black Sea, he said.

There are increasing fears that the conflict could lead to further congestion at European ports, worsening supply chain disruptions.

“With cargo stuck in Ukraine and some carriers not accepting cargo to or from Russia, other European ports will see congestion increase with alternative ports receiving more cargo than usual,” said freight forwarder Zen Cargo. “The congestion also has a knock-on effect with other trade lanes as containers will be stuck at ports, reducing container availability and affecting other trade lanes due to the lack of equipment.”

Hutchison Ports’ ECT Rotterdam terminal said European sanctions against Russia have major consequences for container flows to Russia, and that Netherlands customs was preventing it from loading containers destined to Russia.

“As a consequence, we had to decide not to discharge containers destined for Russia,” it said. “These containers may not be transported further and thus hinder our operational process.” The measure will apply to all modalities from March 1.

The action applies to both export and transhipment containers, and ECT is in consultation with customs how to deal with possible restows of Russian containers.

“It is a worrying time for shippers,” said chief executive Patrik Berglund. “We have the distressing situation unfolding in Ukraine. The wider geopolitical concerns of this are one thing, the immediate impact on energy prices another. Crude oil costs have obviously rocketed, and the carrier community will, no doubt, look to pass this on to customers to protect their own bottom lines.

“So, in addition to the already astronomical freight costs, shippers can expect to see bunker adjustment factors leading to new surcharges, exacerbating their pain.”