This near-term phenomenon of raised rates is expected to continue for a while as the impact of sanctions on Russia remains unclear. Much will depend on how the situation relating to Ukraine will play out and whether Europe can source sufficient oil elsewhere to replace the losses from Russia 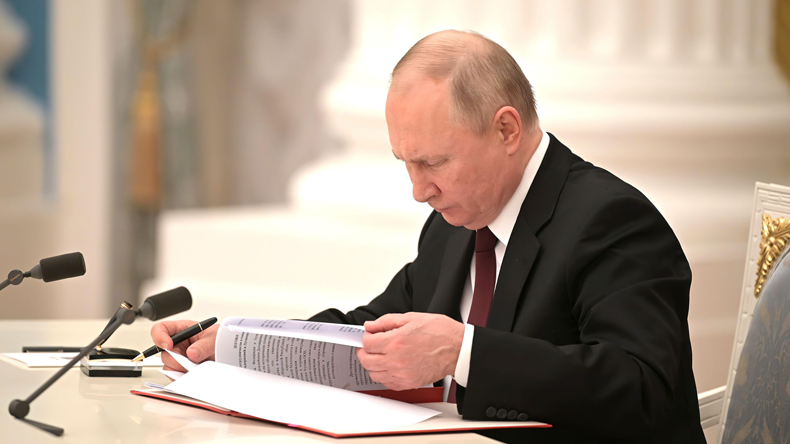 Source: American Photo Archive / Alamy Stock Photo What happens in relation to the conflict in Ukraine in the near term will determine tanker rate movements.

TANKER rates in the short term are likely to remain elevated and volatile, especially in the Baltic and Black Sea regions as the Ukraine situation continues.

Poten & Partners made this forecast as spot rates, especially those for aframaxes and suezmaxes, have surged over the past few days as tension between Russia and Ukraine has escalated.

From February 24 to February 25, the suezmax time charter equivalent weighted average increased nearly sixfold to $67,027 per day, according to data from the Baltic Exchange. The average aframax rate increased by 596% from the start of the week to Friday, surpassing $40,000 per day. Very large crude carriers rates saw a small bump but still sit in the negatives.

In a series of sanction moves against Moscow, the US and its western allies have unveiled by far the most punitive measures by blocking its central bank and removing some of its banks from the Swift financial messaging system, which allows the secure and efficient transfer of money across borders.

“None of these sanctions directly targets the Russian oil and gas industry, but the oil and tanker markets have been significantly affected nevertheless,” said Poten.

Freight rates spiked on various export routes from the Baltic and Black Sea, partly because owners facing security risks and compliance uncertainties are reluctant to charter vessels to buyers of Russian crude.

Poten said at least three commercial vessels, comprising two bulk carriers and a bunker tanker, have claimed to have been hit in the Black Sea since the Russia-Ukraine conflict started.

“Until hostilities are reduced, many shipowners will likely avoid this area, through which Russia exported on average 1.7m barrels per day of crude oil in 2021.”

Meanwhile, Urals crude is being sold at a discounted price as traders and bankers are shunning Russia-related transactions.

“Potential buyers are also having difficulty obtaining letters of credit from Western banks to finance the purchase,” said Poten.

“Many large companies, particularly those which are public, will not want to be seen supporting the Russian economy,” it said the latest weekly report.

The combination of freight rate premium and the pump price discount in the region, however, will still encourage audacious owners and charterers to continue the trade, with a potential shift of cargo flows to Asian destinations, particularly China.

The bigger question is whether the European Union, the largest buyer of Russian crude, can find enough supplies from alternative sources, such as the US and the Middle East.

If the EU can do this, it will bode well for tankers as the tonne-mile demand will increase significantly.

Besides a slow return to oil flows, what’s keeping a lid on a freight rate rise is ‘way too many ships’ in the market, says co-chief executive Trygve Munthe

The prospects remain unclear, at least in the short term.

“The oil market was already tight and reduced export flows from Russia cannot easily be compensated for by other exporters,” said Poten.

Braemar ACM said the 23-nation Organisation of the Petroleum Exporting Countries-plus alliance appears unlikely to release more crude into the market until it is convinced that supply shortage is real, while the US shale exporters are responding more slowly than usual to the higher oil prices.

But the brokerage predicts that enquiries will pick up sharply for West African and Mediterranean crudes.

Elsewhere, “North Sea crudes are an obvious substitute for Urals into Europe,” it said. “Iraqi Basrah crude could move in greater volume to Europe, but current steep backwardation in the oil price makes such long-haul voyages less attractive.”

Both Poten and Gibson expect freight rates to remain high and volatile over the next few weeks, pending the development of the Ukraine situation.

The market fundamentals, which remain weak for tanker shipping, mean rates could fall back if the situation becomes clearer and the tension eases off, said Poten.

But a further escalation of sanctions in relation to blocking Russian exports would result in “more dislocations and inefficiencies in the market.”

Gibson argued that if Russia’s crude exports are hit by stricter sanctions, increased longer-haul imports into Europe will support tankers’ tonne-mile demand if there is sufficient volume to compensate the losses. “Uncertain times ahead,” it said.

Shipowners and charterers have largely been holding back on engaging in any new-period business, with most waiting to see the outcome, according to Braemar.

“Some owners have been indicating high time charter rate ideas today but charterers have not yet been persuaded by current events to pursue further,” it said.