The detention of the Baltic Leader comes as scrutiny of Russian links to shipping operations is heightened and many companies are moving to distance themselves from Russian exposure, fearing further sanctions tightening is imminent

One of the five vessels owned by a sanctioned Russian bank is being held by French authorities in Boulogne. Two of the remaining four are in Russian waters while the others are suspected of Iran sanctioned crude trades 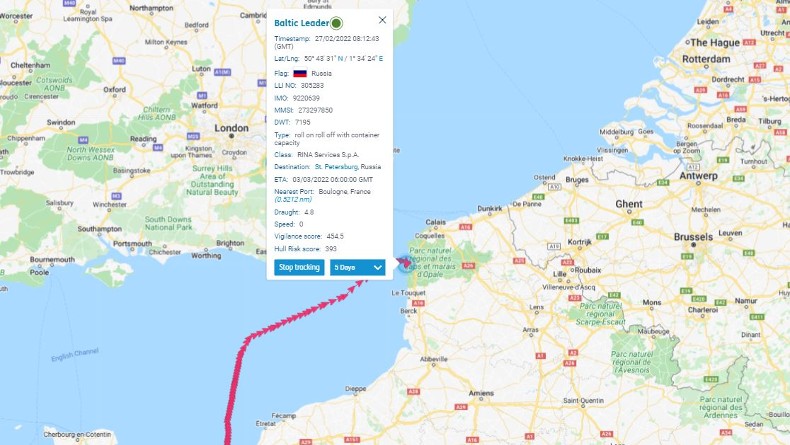 Source: Lloyd's List Intelligence The Baltic Leader was heading from the northwestern French city of Rouen to St Petersburg in Russia with a cargo of new cars when it was intercepted.

FRENCH authorities detained a Russia-flagged ro-ro, Baltic Leader (IMO: 9220639), on Saturday, four days after the US imposed sanctions on the vessel as part of a wider series of actions against Moscow for its invasion of Ukraine.

The 2000-built, 7,195 dwt vessel was heading from the northwestern French city of Rouen to St. Petersburg in Russia, reportedly with a cargo of new cars, when it was intercepted and ordered to the Channel port of Boulogne where it is currently being held.

Baltic Leader is one of five ships owned by PSB Leasing, a subsidiary of Russia’s Promsvyazbank Public Joint Stock Co, that was targeted in the US sanctions.

According to Reuters the Russian embassy in Paris said it would send a note of protest to the French foreign ministry over the seizure, while the bank has said it no longer owns Baltic Leader. It told Reuters that the ship was sold to another firm before the sanctions were imposed.

According to Lloyd’s List Intelligence data PSB Leasing has been the registered owner of the vessel since August 2021.

While detentions of vessels sanctioned by the US in European ports are rare, French officials described the move as “a sign of firmness”.

Fesco Moneron was headed to the Russian port of Vladivostok shortly after sanctions were announced, while Fesco Magadan is in Russian waters headed towards Magadan.

Both Linda and Pegas have been engaged in suspected subterfuge trades carrying sanctioned Iranian crude over several months.

The Linda left the Sri Lankan port of Colombo on February 20 headed for the Sungai Linggi anchorage off Malaysia, while Pegas, which has not updated classification or insurance cover since August 2020, has been anchored at Istanbul Anchorage, since October 25, 2021 and is thought to be storing Iranian crude on board.

The detention of Baltic Leader comes as scrutiny of Russian links to shipping operations is heightened and many companies are moving to distance themselves from Russian exposure, fearing further sanctions tightening is imminent.

So far punitive sanctions imposed on Russia by the US, the European Union and the UK have not directly targeted Russia’s energy supplies, instead targeting some of Russia’s largest banks, companies and wealthy Russian individuals.

Russian shipowner Sovcomflot became subject to new debt and equity restrictions on Thursday as one of 13 ‘critical major Russian enterprises and entities’ identified by the US.

The US has also frozen the assets of VTB Bank, which is financing Russian shipbuilding activities, and Russia is being cut off from exports of advanced technologies.