If restrictions are to be imposed on Russian shipping, the obvious question is what to do with Sovcomflot, the world’s largest tanker operator by fleet size

The west absolutely should show solidarity with Ukraine. But such is our dependence on seaborne Russian energy and commodities that there are limitations to even symbolic support 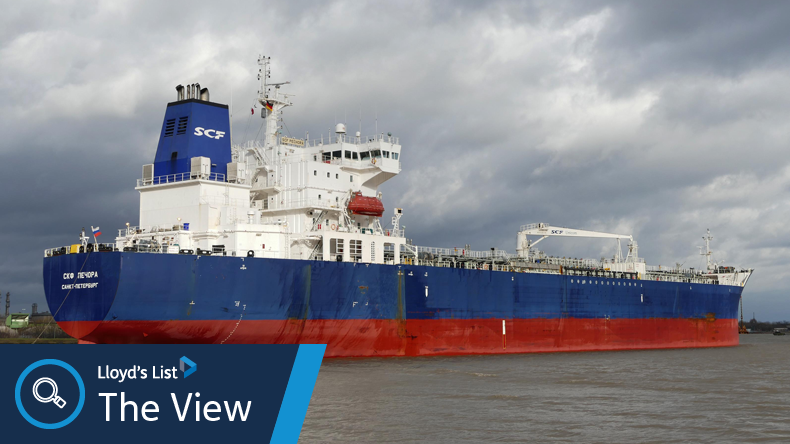 Sovcomflot’s de facto function is that of a quasi-nationalised shipping arm of Gasprom and Rosneft.

WE WRITE as Russia’s armed forces stand at the outskirts of Kyiv; what the picture will look like by the time you read this, we of course cannot know.

But boots-on-the-ground support for the brave people of Ukraine has already been all but precluded by the White House, and President Vladimir Putin is as capable of reading the realpolitik of the room as anybody else.

That very awareness will have strengthened him in his militarist revanchism, emboldening him to launch his invasion of a sovereign state with every right to determine its own path in international affairs.

At least at this stage, western responses will be limited to signing pieces of paper, with the first measures unveiled this week, alongside the threat of more to come. The strategy, we are promised, is escalatory.

It is right that democracies underline their repugnance at the tragic events in eastern Europe. Sanctions — even if largely symbolic — seem a legitimate and proportionate response, and the shipping industry will be among those impacted.

The US has led the way by designating five ships owned by PSB Leasing, a subsidiary of Russia’s Promsvyazbank, as ‘blocked property’. Promsvyazbank itself, incidentally, has also been targeted separately by the UK.

It is not quite clear how effective that move will prove in practice. It’s easy enough to freeze a bank account, but if these vessels do not call at a port where the US has capability to impound them or to ask for them to be impounded on its behalf, it’s hard to see what the actual threat is here.

But if restrictions are to be imposed on Russian shipping, the obvious question is what to do with Sovcomflot, the world’s largest tanker operator by fleet size.

While repeated protestations that it is legally a joint stock company are technically correct, the fact remains that the Kremlin owns 100% of the shares. Its de facto function is that of a quasi-nationalised shipping arm of Gasprom and Rosneft.

Despite the outbreak of hostilities, the west is still purchasing around $700m-worth of Russian energy and commodities every day, with SCF no doubt handling a goodly proportion of that.

The US Treasury's Office of Foreign Assets Control has hit the company with financial restrictions, prohibiting US entities from handling its debt.

But there is nothing to stop its vessels calling in western ports. Five of them are even now alongside in the UK, according to data from Lloyd’s List Intelligence.

And given that western dependence on the oil and gas Sovcomflot carries has been likened by some commentators to that of a junkie, a ban on port calls would hurt those abiding by it at a time when ready buyers for LNG are abundant.

Any further targeting of our industry should be designed in as far as possible to avoid hurting Russian seafarers, who exceed 10% of global labour supply.

Employers commend them as some of the best and most highly skilled crew out there, especially when it comes to technically sophisticated vessel types.

It would in particular be wrong for steps designed to stop Russia’s ill-intentioned oligarchs squirreling away vast dubiously-acquired fortunes to impede the payment of salaries to men and women who graft hard to earn an honest living.

Ukraine has also asked Turkey — a Nato member, after all — to close the Bosporus and Dardanelles to Russia ships.

The 1936 Montreux Convention upholds the right of passage through this vital waterway for merchant vessels of all nations in peacetime, but does offer some leeway to restrict movements by warships in time of war.

The exact legal position is disputed. But given the cordiality of the current relations between Mr Putin and president Recep Tayyip Erdogan, in many ways birds of a political feather, Ankara’s reception to the proposal remained lukewarm at the time of writing.

In the long run, the development that could yet emerge as the most important of all are the renewed calls for corporate transparency.

The role of ‘Londongrad’ as a laundromat for roubles illicitly extracted from the Russian economy has not gone unnoticed, either in the UK or in other countries.

Such demands are not at the moment shipping-specific. But any general tightening up is bound to take in those with a preference for single-ship companies ostensibly domiciled in accommodation addresses in obstinately opaque tax havens.

Lloyd’s List has highlighted this phenomenon before, consistently arguing that whatever the justifications for this state of affairs in the past, shipping is unlikely to get away with it forever.

Meanwhile, our thoughts turn back to Ukraine, where no good outcomes appear in prospect.

To our readers there — some of whom have been in contact to thank us for our coverage — all we can do is to wish you and your families safety, and the strength that you will need in the days ahead.