Exports of wheat and barley are currently in a low season cycle, but there is limited likelihood for a revival in volumes later in the year during the peak, says Danish grains consultancy Source: Justin Kase zsixz / Alamy Stock Photo Any hopes for grain trade flows in the Black Sea reviving from March onwards and into the new-crop arrival by July are unlikely to materialise.

HOPES are fading for a post-winter spike in grains exports from Russia and Ukraine as the conflict spirals, with vessels being hit by missiles in some instances.

Ukraine corn is the grain commodity from the Black Sea that holds the most significant influence on deferred and shut-in exports, according to Danish grains consultancy BullPositions.

The high season runs from November to April, with monthly averages estimated at 4m-6m tonnes.

Based on a very large 2021 crop, monthly export figures from Ukraine were expected to reach the higher end of that range for a prolonged period, but the “current state of affairs leaves these corn export prospects highly in doubt,” said the consultancy’s founder Jesper Buhl.

The Black Sea is a minor trade for container shipping. But the wider implications of the Russian invasion cast longer shadows over the sector

The seasonal low point export level of wheat and barley from the Black Sea will continue in the coming months, with limited likelihood of a trade flow revival from March and towards the new-crop arrival by July, he said.

Ukraine, Romania, and Bulgaria will have exported more than 33m tonnes of the grains by the end of January during the 2021/2022 export season. Exports have been frontloaded on the back of a 16m tonne boost in production.

On the other hand, exports from Russia have been downbeat, with 21m tonnes shipped between July and January, 11m tonnes below the same period in the previous season, as output fell by 13m tonnes and its competitiveness declined due to a rise in export taxes.

With ports largely shut and commercial vessels prevented from entering the Sea of Azov, exports will undoubtedly be impacted, and it is not just grains at stake.

Russia’s coal exports, both from the western and eastern coasts, make up the bulk of impacted volumes, according to Arrow Shipbroking. In the past year, exports of coal from Russia and Ukraine totalled 186m tonnes. 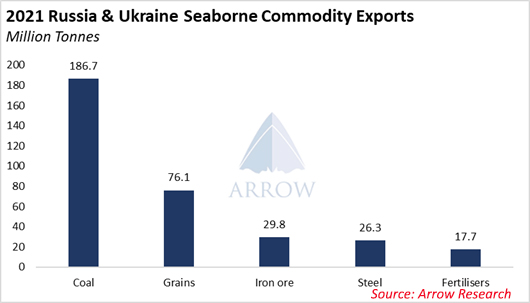 China is a keen importer of Russian coal from the east, but potential sanctions by the European Union on Russian exports could push Baltic coal to China, it said, adding that this could lead the EU to soak up coal from the US, Colombia and South Africa.

Grains reached 76m tonnes, while iron ore was at 30m tonnes, steel at 26m tonnes and fertilisers at about 18m tonnes.

Imports are more diverse, with bauxite being the biggest draw.

Handysizes are the most exposed vessel class to trade in and out of the region, with 16%, it added. A third of this trade is coal, but the rest is mainly split across the other commodity groups. 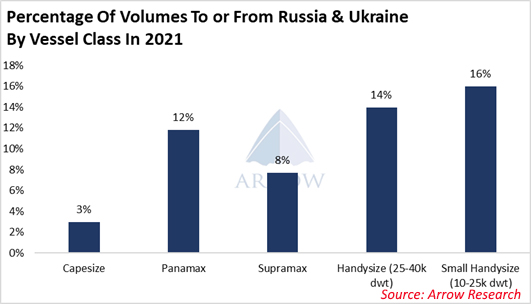 While panamaxes are exposed to the Baltic coal trade and some Black Sea grains, capesizes have a limited exposure.

Elsewhere, a number of bulkers have been shelled in crossfire, prompting the Marshall Islands flag state to issue an advisory, raising its security level to III and warning vessels that operate in the area.

Sanctions talk is also unnerving the market, although it may be beneficial to tonne miles.

Several bulk carriers have been seen heading out of the region, which may lead to overtonnage mainly in the Atlantic, according to brokerage Braemar ACM.

While commodity prices rose on the back of perceptions of restricted supplies, forward freight agreements for capesizes and panamaxes showed heavy losses of $2,000-$4,000 on some contracts by the close of trading on Thursday versus the previous session, with a number of vessels failing to fix in the spot market.