Odessa subject to ‘indiscriminate’ shelling and unconfirmed reports say Russian troops are in the city. Crew have been diverted to Istanbul and Poland 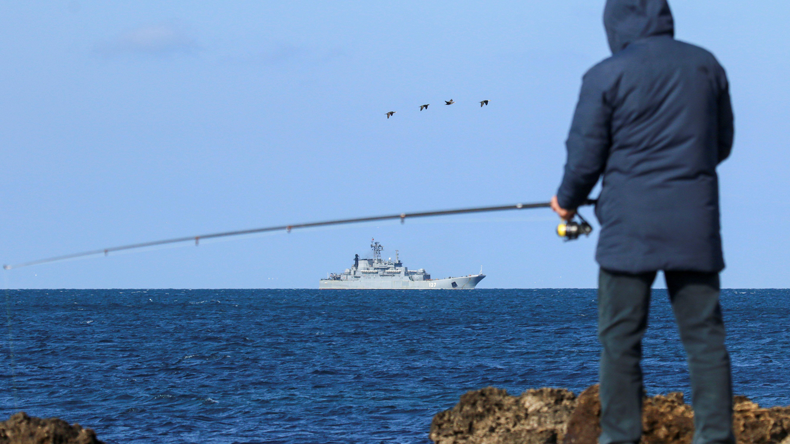 THE shipping industry is scrambling to work out how to respond to Russia’s invasion of Ukraine, with the Sea of Azov blockaded and Ukrainian ports closed.

“Right now, the situation has significantly deteriorated with the start of the Russian full-scale military intervention… which is an act of aggression against Ukraine,” he told Lloyd’s List.

Mr Lisuchenko said Russia had closed areas for shipping under the guise of “counterterrorist operations” aired by warnings from Novorossiysk and Taganrog stations.

“This poses a direct threat to maritime safety and security and disrupts international commercial shipping in the Black Sea – Sea of Azov region,” he said. “Moreover, the Russian Federation’s propaganda machinery attempts to disperse disinformation about the marine casualties in these areas.

“Most recently they circulated the message about [Ukrainian] airstrikes hitting commercial vessels in the Sea of Azov.”

George Pitaoulis, marine personnel and development director at ABC Maritime, a Switzerland-based shipmanager, told Lloyd’s List that Odessa has been shelled and his company had moved operations to its Greek office.

Mr Lisuchenko confirmed Odessa is being shelled “indiscriminately” but could not say if or how many people were killed. The Russians had also shelled Mariupol this morning, he said. “They are continuing their onslaught.”

Mr Pitaoulis said the price of a taxi from central Odessa to the city’s outskirts had risen from about $8 to about $500 as civilians fled the city.

There were no flights to Ukraine, Moldova or Belarus, with the only way into the country through Romania, he said.

He said it was possible Russia would launch another attack from the west through its enclave in Moldova.

“In Odessa a nearby port and military installations have been hit by missiles in the early morning. It seems that now living quarters have been hit,” he said.

“We have been in contact with all office staff and they are all safe and sheltering. We have unconfirmed reports that Russian troops are in Odessa. Communication including internet is still fully operational.”

Mr Jensen said staff were in contact with families and seafarers as much as possible.

The International Chamber of Shipping said 10.5% of seafarers were Russian and 4% were Ukrainian. It warned impeding their travel would restrict global trade.

“The safety of our seafarers is our absolute priority. We call on all parties to ensure that seafarers do not become the collateral damage in any actions that governments or others may take,” said ICS secretary-general Guy Platten.

“Seafarers have been at the forefront of keeping trade flowing though the pandemic and we hope that all parties will continue to facilitate free passage of goods and these key workers at this time.”

The ICS, citing Lloyd’s List Intelligence, said as many as 116 vessels were queueing in the southern inlet to the Kerch Strait and a further 52 vessels were waiting to the south because of Russia’s blockade.

The head of an international shipping association said his members were scrambling to understand the possible threat and feared for their Ukrainian operations.

“We’re looking at a nightmare scenario,” said the source, who spoke on condition of anonymity because of the political sensitivity of the topic.

He said the closure of commercial flights to Ukraine would impede crew changes and crew supply could be hit as seafarers were called up to defend their country.

“There’s certainly going to be issues with paying seafarers,” he added, referring to the fear that sanctions will stop employers paying salaries into Russian or Ukrainian bank accounts.

“We are trying to bring people home to Ukraine via neighbouring countries using buses and trains,” Intermanager secretary-general Kuba Szymanski said. “Since it is very early, members are also accommodating returning seafarers in Istanbul and Warsaw. Odessa has been hit by several missiles but this is reported by one of our sources only.”

Mr Lisuchenko said Russia had closed vast areas of the Black Sea and Sea of Azov under the pretext of naval exercises, creating “a commercial naval blockade”.

Maersk, which has a service calling at Chornomorsk and Yuzhny, has decided to temporarily cancel port calls to Ukraine and is no longer taking bookings for Ukraine cargo.

“The safety and wellbeing of our employees is of paramount importance for AP Moller-Maersk and we have plans and policies in place so that they get the support needed,” a spokesperson told Lloyd’s List. “We have a business continuity strategy so that we continue to serve our customer supply chain’s needs as the situation allows.

Cargo en route for Ukraine would now be discharged at Port Said and Korfez.

A spokesman for Hapag-Lloyd, which runs a shared service with Arkas to Odessa, said the chartered vessel used on the weekly service had left Odessa and was en route to Istanbul.

“Our office in Odessa is closed for the time being and the entire staff is working from home,” he said. “We are monitoring the developments very closely and we are currently working on alternatives to the previous routing of our BMX service, which we will announce in due course.”

Has Putin torn up your contracts?

The only containership at port in the region is the Cosco-operated 2013-built, 9,403 teu Joseph Schulte (IMO: 9605243), which is on charter from Schulte Group and arrived at Odessa only last night.

A spokesperson for Schulte Group said manager Bernhard Schulte Shipmanagement was monitoring the situation closely and was in “constant contact” with the crew.

“The crew and ship are safe and well,” the spokesperson said. The company said it would not comment on the potential departure of the vessel.

“Our concern and sympathy goes to the people of Ukraine, who are now being drawn into a senseless war,” she said.

“We are particularly concerned about the 480 employees at our terminal in the port of Odessa. The last employees left the port this morning. Previously, they reliably handled two ships that were then able to leave the port.”

HHLA has paid port employees a month’s salary in advance to allow them to stock up on necessities.

“HHLA committed itself to Ukraine in the early 2000s, relying on the Helsinki Final Act and other post-Cold War security agreements in Europe,” Ms Titzrath said.

“We have since invested about $170m in the terminal in Odessa. This was also a contribution to securing peace and prosperity in Europe. We have been in close contact with the management in Odessa for days.”

The company has set up a crisis team on site that is in close communication with the head office in Hamburg.

“Currently, the situation is still confusing, which is why it is in our view still too early to say anything about the possible effects of sanctions or the consequences of war,” Ms Titzrath said

“The port of Odessa was closed this morning by the Ukrainian authorities. All HHLA employees have left the terminal. HHLA as a group is not endangered in its substance by the events in Odessa. Since 2014, trade with Russia has already fallen by a quarter as a result of the Russian occupation of Crimea and the subsequent sanctions imposed.”

Dryad Global, a security firm, said all operations at Ukrainian sea ports have been suspended by order of the military. It said freedom of navigation remained highly uncertain.

Dryad advised ships to avoid any transit or operation in the exclusive economic zones of Ukraine or Russian within the Black Sea. But the waters of Turkey, Bulgaria and Romania were unaffected.

However, Dryad said it was unlikely there would be shots fired between forces at sea.

“Any vessel currently within Ukrainian ports should seek to leave immediately if deemed safe to do so,” it said.

Ships should broadcast on the Automatic Identification System, clearly state their intentions on VHF radio, and comply with Russian warships’ instructions if challenged. The firm said commercial uncertainty, not crew safety, was the key risk.

Last week Denmark called home its frigate Esbern Snare from the Gulf of Guinea, where the ship had been on piracy patrols, in response to the tensions.

US to impose sanctions on company building Nord Stream 2 pipeline

US sanctions shipmanagement firm and vessel for aiding Houthis