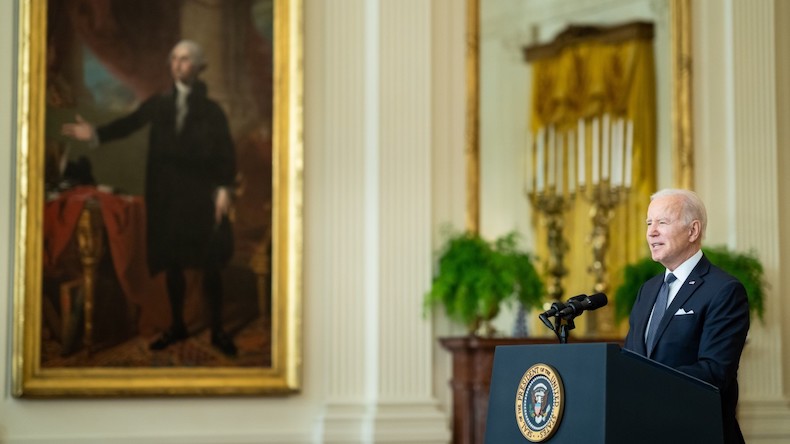 THE US Treasury’s Office of Foreign Assets Control has imposed sanctions on five ships owned by PSB Leasing, a subsidiary of Russia’s Promsvyazbank Public Joint Stock Co, as part of a broader action against Moscow for its invasion of Ukraine.

US President Joe Biden announced the sanctions on Russia after it deployed troops into two pro-Russian separatist regions of eastern Ukraine on Monday, calling Moscow’s action a “flagrant violation of international law” and “the beginning of a Russian invasion of Ukraine”.

“If Russia goes further with this invasion, we stand prepared to go further as with sanctions,” Mr Biden vowed as he announced the “first tranche of sanctions to impose costs on Russia in response to their actions yesterday”.

“Because of Russia’s actions, we have worked with Germany to ensure Nord Stream 2 will not — as I promised — will not move forward,” Mr Biden said in the televised remarks, referring to the controversial natural gas pipeline under construction from Russia to Germany.

“That’s an $11bn investment and a prized gas pipeline controlled by Russia that will now go to waste, and it sacrifices what would have been a cash cow for Russia’s financial coffers,” a senior administration official told reporters.

“But it’s not just about the money. This decision will relieve Russia’s geostrategic chokehold over Europe through its supply of natural gas, and it’s a major turning point in the world’s energy independence from Russia.”

Mr Biden none the less offered assurances that “we’re closely monitoring energy supplies for any disruption. We’re executing a plan in coordination with major oil producing consumers and producers toward a collective investment to secure stability and global energy supplies”.

It identified the state financial institutions as the Corporation Bank for Development and Foreign Economic Affairs Vnesheconombank and the Promsvyazbank Public Joint Stock Co, along with 42 of their subsidiaries.

Treasury said the action was taken in response to President Vladimir Putin’s decision to recognise the so-called Donetsk and Luhansk People’s Republics as “independent” states and to deploy troops to these regions.

It said Ofac’s action built on Mr Biden’s Executive Order on Monday which imposed “severe restrictions” on economic activity with the DNR and LNR regions of Ukraine.

“In lockstep with our Allies, we’re fully blocking from the US and European financial systems the fifth-largest Russian financial firm, which is VEB — a glorified piggy bank for the Kremlin that holds more than $50bn in assets,” the senior administration official said.

“And we’re also fully blocking a $35bn bank, Promsvyazbank, that finances the activities of the Russian military,” he said. “In plain English, the full block of these banks means they can no longer make any transactions with the US or Europe, and their assets in our respective financial systems are frozen.”