Why the Trinity Spirit FPSO explosion was not a safety anomaly

Nigeria’s creaking energy infrastructure has suffered years of underinvestment, leaving an ageing fleet of risk-laden units operating in a regime where safety and security challenges abound and pollution incidents are common

The case of the Trinity Spirit — an unflagged, unclassed, 46-year-old FPSO owned by a defunct company in receivership which exploded last week — has exposed the fragility of Nigeria’s offshore sector where ageing units are the norm 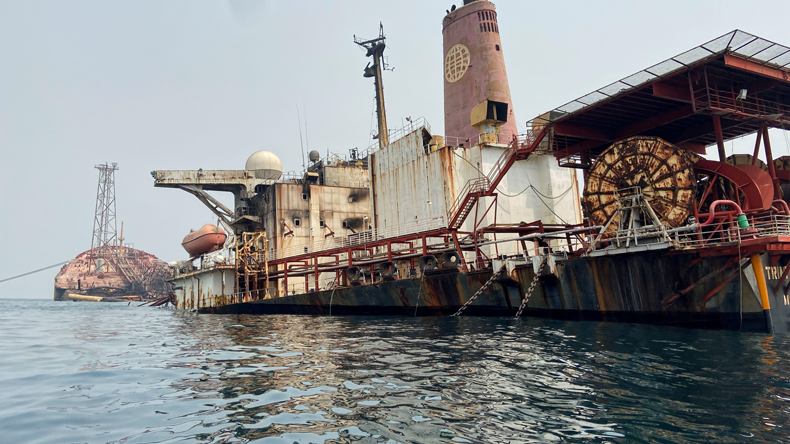 Source: Reuters / Alamy Stock Photo The wreck of Trinity Spirit: The 1976-built vessel was holding 50,000-60,000 barrels of crude oil when the explosion happened.

ONE week after an explosion ripped apart an unflagged, unclassed, 46-year-old floating production, storage and offloading unit owned by a defunct company in receivership, the Nigerian authorities have finally extinguished the fire, leaving a smouldering wreck and a list of questions for investigators.

The 1976-built Trinity Spirit (IMO: 7370325) had not been producing oil for at least a year and was anchored to a declining field, but while the market impact of the blast was negligible the pollution and loss of life have exposed the fragility of Nigeria’s ageing energy infrastructure that has suffered from lack of investment and years of lax safety oversight.

Owners SEPCOL confirm a fire ‘engulfed’ the FPSO following a blast in the early hours of February 2. The cause of the explosion is being investigated

Trinity Spirit, which once had the capacity to produce 22,000 barrels of oil per day was regularly being used for storage, was holding some 50,000-60,000 barrels of crude oil when the explosion occurred in the early hours of February 2.

The full extent of the pollution caused by the incident is not yet clear. The Nigerian Upstream Petroleum Regulatory Commission has downplayed any suggestion of a major oil pollution incident. However, images from the European Space Agency’s Copernicus Sentinel-2 satellite taken 48 hours after the explosion revealed  a 20 km slick of oil stretching from the smoking remains of the FPSO.

The fate of the 10 crew reported to have been on board at the time of the explosion is also the subject of contradictory statements.

Regular updates issued by the registered owners of the FPSO, Shebah Exploration & Production Co — described as being in receivership — said three crew members were found dead and three were rescued, leaving four remaining crew unaccounted for.

However, the NURPC has continued to insist that there has been “no report of any casualties or fatalities” as a result of the explosion.

As the lead investigating authority in Nigeria, the NURPC is conducting inquiries. However, Lloyd’s List understands that the presidential office has taken a direct interest in the case and is controlling the very limited flow of public information, such is the sensitivity of the issue.

The case of Trinity Spirit may have attracted unwanted international attention, but it is by no means an anomaly.

Nigeria’s creaking energy infrastructure has suffered from the same underinvestment that is now endemic across the West African upstream sector. It also has its own fair share of corruption, security challenges and uncompetitive production terms to contend with, while pollution incidents are a regular reality of the sector. Nigeria’s National Oil Spill Detection & Response Agency recorded 352 incidents in 2021 including two major oil spills.

Trinity Spirit’s age and status as an unclassed FPSO was also not unusual in Nigeria. Lloyd’s List Intelligence data shows that there are three older vessels operating in Nigerian waters, where the average age of FPSOs is 28.1 years. There are seven active FPSOs older than Trinity Spirit producing oil off West Africa.

The story of Trinity Spirit’s decline is not unusual in the context of West African oil production.

At the point of the explosion, the vessel was anchored to Nigeria’s Ukpokiti oil field, which has steadily declined from around 7,000 barrels per day five years ago to zero in 2020 and 2021, according to data from Nigeria’s oil ministry.

Sepcol had acquired ConocoPhillips’ equity interest in in the bloc as far back as 2004, but the deteriorating fortunes of the operation had left the operator battling cash flow problems and the company is now described by government statements as being “in receivership”.

What remains unclear is the level of regulatory scrutiny and maintenance that Trinity Spirit was receiving in the run-up to the explosion.

Lloyd’s List has spoken to contractors who have been on board the FPSO in recent years who have questioned whether the vessel was being properly maintained while it was being used to store oil for traders.

Although once flagged to Liberia, officials from the registry confirmed that Trinity Spirit was de-classed nearly decade ago with no record of any transfer of flag responsibilities.

Similarly, classification society ABS has had no involvement with the vessel since April 27, 2015 and the last record of the vessel being insured by an International Group member was when the vessel parted ways with the Standard P&I Club in February 2009.

Since then no records are available for class, flag or insurance and neither Sepcol or the NUPRC have responded to Lloyd’s List’s request for information regarding the vessel’s certification or maintenance.

It is not uncommon for FPSOs to operate without class oversight. According to class experts, ageing assets frequently operate with only national regulatory body oversight or verification programmes.

Class requirements for FPSOs are not the same for actively trading vessels. Minor issues of non-compliance in ageing vessels, which is common, can often cause insurance complications, prompting operators to side-step class altogether and seek oversight from coastal authorities directly.

In a global fleet in which more than half of the ship type vessels are over 30 years old and a quarter are over 40 years old, that is not just an issue isolated to Nigerian waters.

A total of 55 FPSO units in the global fleet are reaching the end of their design life in the next five years, a further five already have life extension in place, with a further 19 currently being evaluated for life extension, according to ABS, which classes 60% of the global operating fleet of FPSOs.

But while the challenges surrounding maintenance and structural fitness of ageing FPSOs is well understood by class and operators currently developing safe life extension projects, the ageing infrastructure in Nigeria, and to some extent across West Africa, presents more specific safety concerns.

Nigerian oil production is struggling to arrest decline and has been steadily losing market share to other comparable grades for years, notably from the US.

“All told, unless investment rebounds strongly we project that its crude production will drop to under 1m bpd by 2027, with condensate accounting for another 500,000 bpd,” BRS said.

Shipments to Asia have dropped by around 15% compared with 2019, while US barrels have gained a toe hold in European refineries at the expense of Nigerian barrels.

According to BRS’ medium term outlook, Nigeria will continue to struggle to attract the necessary financing to open up new deposits and stem accelerating declines at legacy fields, all of which suggests that its production will be steadily eroded.

“All told, unless investment rebounds strongly, we project that its crude production will drop under 1m barrels a day by 2027,” said the BRS outlook.

Given the age of Nigeria’s FPSO fleet and the fact that unplanned outages and pollution incidents are now a regular occurrence, the case of the Trinity Spirit may be a signal of further problems yet to come.

Working Together in Safety: The key to shipping’s future success