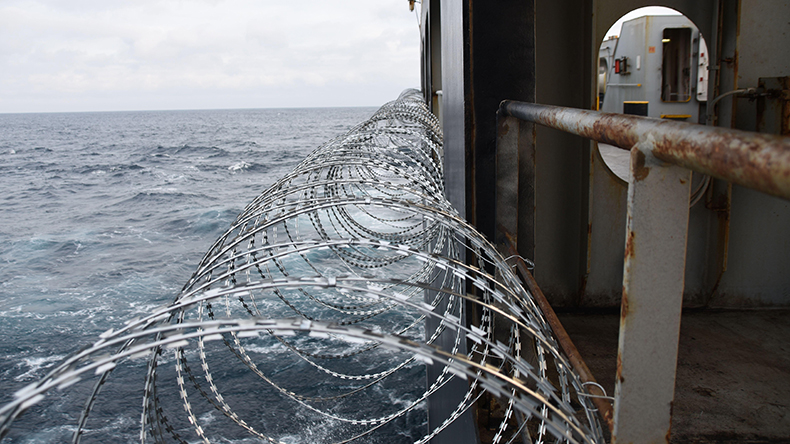 Source: Lucia Gajdosikova / Alamy Stock Photo The mix of legal jurisdictions and authorities makes the Gulf of Guinea harder for international navies to operate in.

INTERNATIONAL efforts to co-ordinate the fight against piracy in the Gulf of Guinea are gaining momentum, according to the former shipping adviser to EU Naval Force Somalia.

In February of the past year, Nigeria, through its Maritime Administration and Safety Agency, known as Nimasa, and the Inter-regional Co-ordination Centre of the Yaoundé Code of Conduct, which represents 21 countries of the Gulf of Guinea region, signed a memorandum of understanding to establish a regionally led Shared Awareness and Deconfliction, known as Shade, forum.

The G7 ++ Friends of the Gulf of Guinea group of nations appointed Mr Church as special adviser to the forum’s co-chairs.

Mr Church said the forum was designed to help co-ordination between navies and information sharing centres in the area to respond to pirate attacks, by establishing best practices for reporting incidents and letting navies know who is doing what.

The forum started in July 2021 and meets every two months. It has since had four plenary sessions, which include all its stakeholders, including the 25 Yaoundé Code of Conduct signatory countries, 20 navies that have worked in the Gulf of Guinea, and the international shipping industry.

Three working groups meet online between plenaries; 18 meetings have been held so far.

“The intention behind that intense, ambitious timeline is to deliver output and deliver operational effect,” Mr Church said.

He said one of Shade’s biggest successes so far has been to replicate the Mercury communication platform used in the Indian Ocean for letting navies notify and speak to each other on an unclassified internet platform.

Mr Church says the system, called Solarta, let the Russian navy respond quickly to the October 25 attack on the containership MSC Lucia (IMO: 8413887), chasing the pirates away before they could take any hostages.

“The system has gone online, is being used … and has proved to be effective in preventing attacks becoming hostage situations,” Mr Church said.

“And that is a big accomplishment in the space of six months.”

The emphasis on shared awareness is because no one country answers to another; the forum cannot tell navy ships what to do. If more ships are needed, it cannot marshal them like a country could.

The mix of legal jurisdictions and authorities makes the Gulf of Guinea harder for international navies to operate in than Somalia, a failed state with no coast guard. Navies cannot chase pirates across state sea borders without the states' permissions.

Faced with these constraints, Shade seeks instead to enable co-ordination between the ships that are already there to best deter pirates. It can find where the gaps are and help the different parties agree on solutions.

“It’s not supposed to be prescriptive; it’s intended to allow nations to think about how to improve their own practices,” Mr Church said.

Despite this, Mr Church said the system has brought transparency and accountability and cut the amount of time taken to respond to pirate attacks.

It should also lay the groundwork for regional countries like Nigeria to own the problem and take charge of the response, with help from better-resourced foreign powers.

The Shade forum has made strides, but there was still more work to be done building trust between regional and international navies, he said.

Lloyd’s List has reported warnings that Denmark’s capture and subsequent release of three suspected pirates had angered Nigerians and risked straining the relationship between its navy and the international shipping industry.

Mr Church said actions seen as unilateral did not help build the trust needed for the forum to work: “We continue to encourage all navies to work together in that collaborative philosophy. We are working towards that. That's all I would say on it.”

A goal of the forum is that when an attack happens, an international navy would pass information to a littoral state, leading to pirates caught, tried, and convicted, establishing a best-practice model and a deterrent to pirates.

“We’re not that far away from that,” Mr Church said. “But what we do in this forum is absolutely vital so that trust is established. And once it is, I think we’re all going to be in a better place.”

Piracy watchdog the International Maritime Bureau reported 34 incidents in the Gulf of Guinea in 20211, down from 81 the year before, and 57 crew kidnapped in seven incidents, down from 130 in 2020.

The IMB said the decrease was because of “vigorous action taken by authorities” and commended the “robust actions of the Royal Danish Navy”.

But security sources are divided on why incidents have fallen, saying it is too soon to tell whether it was down to better enforcement or political and economic factors within Nigeria.

Piracy and robbery incidents at sea at lowest since 1994