Ukraine: Minor incursion could have major impact on shipping

The Black Sea is a substantial regional market, particularly for tankers and dry bulk, and knock-on effects will be felt elsewhere

If war breaks out between Russia and its neighbour, our industry will find itself caught up in the crossfire, hopefully of the metaphorical rather than literal variety 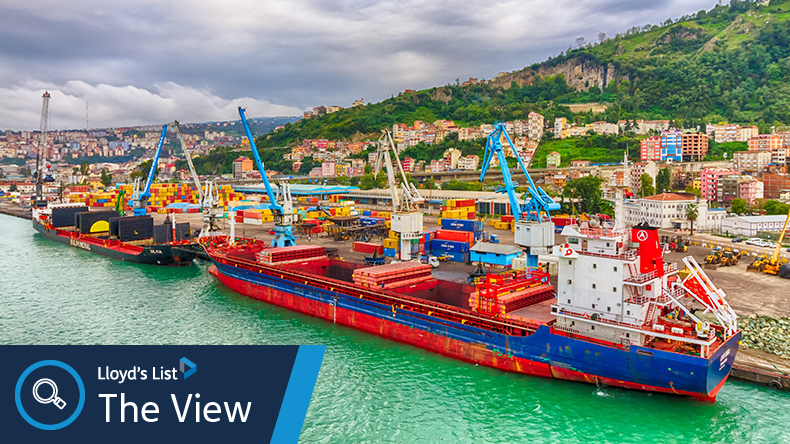 RUSSIAN war on Ukraine is not yet a fait accompli.

While 100,000 troops serving in the former country’s formidable military machine have been massed on the border for some time, the base case scenario remains what President Biden perhaps tactlessly dubbed a “minor incursion”.

Better yet, it may be that the Kremlin is grandstanding and conflict can yet be avoided altogether.

But whatever happens, experience of an earlier outbreak of shooting in 2014 indicates that one way or another, shipping will find itself caught in the crossfire, hopefully of the metaphorical rather literal variety.

Unless they have direct involvement in the region, few but the most avid readers of brokers’ reports will pay the Black Sea scant attention.

Nevertheless, it is a substantial market in its own right, particularly for tankers involved in oil and gas activities and dry bulk vessels serving the substantial grain export sector.

Dry bulk market could benefit if thermal coal or natural gas flows are disrupted from Russia to Europe as tonne-miles increase, while grains from Black Sea ports could face headwinds in the near-term as a result of friction in the region

Precedent suggests that disruption will have noticeable knock-on effects for these vessel types elsewhere in the world.

There is in addition a local container trade, which certainly suffered last time round, with repercussions felt as far away as Hamburg.

The risk of merchant vessels getting caught up in any fighting is thankfully small, but war cover will be advisable. As ever, underwriters will price accordingly.

There will be legal complications too. During the crisis of eight years ago, the government of Ukraine banned international shipping from calling at ports in Crimea, occupied by Russia prior to subsequent annexation.

As several P&I club circulars pointed out at the time, as the legitimate government whatever the facts on the ground, it had every right to do so.

The ban is still in place, and dozens of vessels have since been kicked off their flags for ignoring the stipulation.

Ukraine is an important labour supply country, particularly when it comes to officers. That could be a problem in a labour market that is already taut, thanks to coronavirus-related travel restrictions.

Ironically, employers also point out that 2014 sanctions made it harder to pay Ukrainian seafarers with Russian bank accounts.

Also of concern is the potential for sanctions by the US — and perhaps the EU if the new German government can be cajoled into a less self-interested stance — and any retaliation on the part of Moscow.

The battleground will be gas, with restrictions on financing and technology transfer. All of this could prove tricky, given that Europe is dependent on Russia for 40% of its supply.

Although all options are officially still on the table, the severity of the measures adopted will likely be in proportion to the scale of Russia’s offensive.

Lloyd’s List is a business website with a small if select readership, well aware that our deliberations are of no weight in the upper echelons of the diplomatic community.

For what it’s worth, we are of the opinion that Ukraine is a sovereign state, and as such, entitled to come to its own decisions about its international alignments.

But as Prussian general Carl von Clausewitz — the most influential military thinker of all time — famously postulated nearly 200 years ago, war is the continuation of politics by other means.