Industry experts told a UK parliamentary committee that some container ports have been working at levels described as 95% full. It’s not a crisis, said one witness, but it’s uncomfortable

The UK is seeking to understand what factors created the supply chain disruption that led to empty shelves, delayed deliveries, and dissatisfied consumers 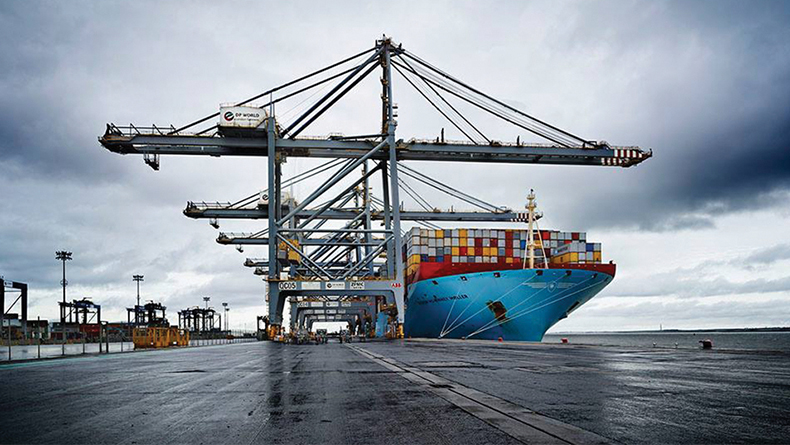 Eighty vessels were waiting at anchor in southern California compared with one vessel off Felixstowe and none off London Gateway (pictured) or Southampton, the committee was told.

CONTAINER ports in the UK have become more resilient since the pandemic began, a government trade committee has heard.

However, industry expert witnesses said several factors have contributed to reveal the vulnerability of the country’s logistics supply chain.

“Our ports are at the upper end of being busy,” said Tim Morris, chief executive of the UK Major Ports Group, adding that while container terminals expect to be “between 70% and 80% full, some have been running at 95% full”.

Lloyd’s List markets editor Michelle Wiese Bockmann told the parliamentary hearing that congestion was much worse at other ports around the world, especially in Chinese load ports and in discharge ports in southern California, where 80 vessels were waiting at anchor compared with one vessel off Felixstowe and none off London Gateway or Southampton.

Ms Wiese Bockmann said the Ever Given grounding had shown “the fragility of the supply chain,” with up to 100 containerships waiting to pass through the Suez Canal and millions of boxes delayed.

Gavin Simmonds, commercial policy director at the UK Chamber of Shipping, told the committee that from a shipping point of view, the industry had shown itself to be flexible. Scheduling had been refined and liaison between ships and ports had been improved.

He said the many partners in the logistics supply chain should respond to the congestion by seeking a better understanding of what is being carried on board ships.

“What was on the Ever Given, what products were lost to the just-in-time supply chain, and what are the UK’s priority goods on their way to us?” he asked, adding there should be better exchange of data.

Disruption to the logistics supply chain has affected all stakeholders, the committee heard. There had been an impact on port productivity, on storage of containers in port, on the return of empty containers, on road haulage and rail schedules.

“Everyone in retail has experienced problems in the supply chain, in the Southeast, the Northwest, and elsewhere,” said Andrew Goodacre, chief executive of the British Independent Retailers Association.

Mr Goodacre did not expect a return to pre-pandemic normal in 2022, and suggested that retailers would look at the possibility of moving some of the supply chain from road to rail in the coming year.

He questioned the wisdom of “putting all our eggs into the one [trucking] basket.”

Committee members asked about the impact made by increased container line revenues on the supply chain.

Ms Wiese Bockmann said the lines themselves were anticipating a high revenue stream throughout 2022 because newbuilding ships would not be delivered until 2023 or 2024.

Mr Goodacre said retailers were exploring how to make the supply chain more resilient by shortening it through near-shoring.

Mr Morris agreed that ports were anticipating pressure on throughput in 2022. “You won’t need much to change the situation back to the [alert] orange zone,” he said. “We expect to be busy for a while.”

The committee was also keen to hear what the government might do to change the situation.

The witnesses agreed that better use of data throughout the supply chain would improve the predictability of flows. However, the energy price hikes, the additional demand for goods generated by coronavirus, and the shortage of truck drivers were all beyond the immediate response of politicians, said Mr Goodacre.

Ms Wiese Bockmann concluded by urging the government to do all it could to help seafarers wanting to get home from their ships, calling them the “unsung heroes of the pandemic”.

One Hundred Ports: Carriers survive and thrive as supply chain grinds to a halt