Lloyd’s List’s annual rundown of shipping’s most influential players is fronted by those demonstrating the scale, will and desire to bring wholesale changes to an industry requiring leadership in a period of profound disruption 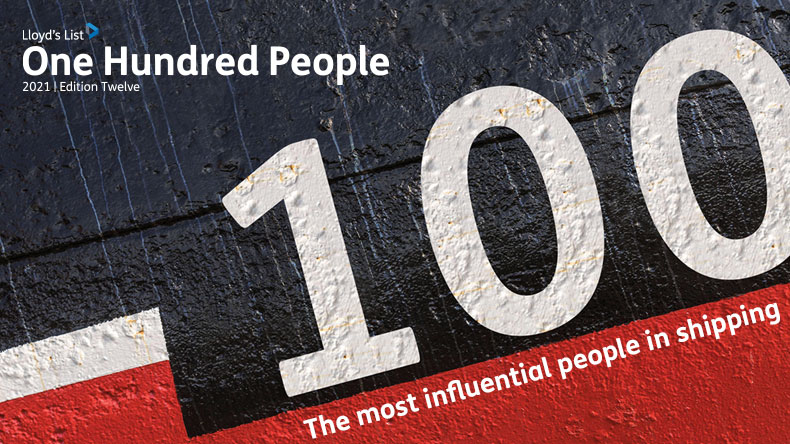 Top 100: annual ranking reflects the tectonic shifts at the heart of the industry.

THE global importance of shipping has been exposed by the coronavirus pandemic; but so too has the fragility of the global supply chain.

Trading patterns have been rewritten, the shipping rulebook ripped up. Uncertainty is the new normal.

Two years on from the initial outbreak of the virus, most markets may be in recovery mode ― but even the extraordinary and unprecedented earnings witnessed this year are a mere sideshow compared to the regulatory, financial and technical hurdles that lie in wait as the industry is dragged towards a zero-carbon future.

All shipowners face a generational dilemma right now. Maximising the energy efficiency of the traditional fleet in a bid to buy time for viable zero-carbon fuel substitutes and infrastructure to emerge is a strategic minefield, regardless of environmental conviction or business model.

So, as Lloyd’s List unveils the 12th edition of its Top 100 most influential people in shipping, the annual ranking of maritime power reflects the tectonic shifts happening at the heart of the industry.

This year’s edition is led by those who are pushing the boundaries and scaling aspiration into action.

The essential role of the seafarer ― rightly showcased at the top of last year’s ranking ― is a thread that continues to run through many of the entries this year.

However, the editorial assessment of influence for this edition rested on the supply chain and the zero-carbon transformation underpinning much of the decision-making in the industry.

Those at the top of our rankings bring together all these factions, demonstrating not only the scale but also both the will and desire to bring wholesale changes to an industry requiring direction and leadership at this pivotal juncture.

So (drum roll), following a unanimous verdict from the editorial panel behind the rankings, Lloyd’s List has chosen to elevate Robert Uggla and Søren Skou, chief executives of Danish giants AP Moller Holding and AP Moller-Maersk, respectively, to this year’s number one position.

Under their leadership, Maersk has been transformed from a conglomerate to what the company coins an “integrator of global logistics”. The move has paid off handsomely for the group during the pandemic. Maersk is expecting earnings of more than $20bn in 2021 ― over four times its record total.

Of course, a large extent of the company’s earnings was generated by factors beyond its control, particularly congestion and supply chain bottlenecks, which drove freight rates to record highs.

Yet credit must also go to both Mr Uggla and Mr Skou, who have been the joint force behind Maersk’s move to reinvent itself as an all-encompassing logistics company. The pandemic has brought the value of end-to-end supply chain solutions to the fore.

The group is also leading the way with its decarbonisation efforts, including investments in the viability of sustainable fuels, as well as commitments to cut all carbon emissions from its operations by 2050.

Despite sceptics noting this would mean carbon-neutral ships would have to be in service by the end of 2030, Maersk announced earlier this year that its first carbon-neutral newbuildings had been ordered and would hit the water as early as 2023.

With Mr Uggla and Mr Skou having reshaped the company with phenomenal success, they are now turning their attention to reshaping shipping too. With the scale, drive and ambition to provide a lasting impact on the industry, Lloyd’s List sees Maersk’s dynamic duo as the most influential players in shipping today.

Second in our list is the Aponte family, heading fellow container shipping giant Mediterranean Shipping Co, who surge up the rankings following a shrewd manoeuvre for secondhand tonnage.

Gianluigi Aponte remains the shipowner’s shipowner, renowned for his uncanny ability to spot a deal and execute at scale before anyone else has even clocked the trend.

With charter rates going through the roof and capacity squeezed, MSC took full advantage and steadily started buying, using its extra cashflow from a buoyant box market. MSC spent more than $2bn on secondhand ships in 2021, in a move that speaks volumes about Mr Aponte’s earnings expectations for 2022.

Meanwhile, MSC is on the cusp of usurping Maersk as the world’s largest container shipping line in capacity terms, following not only its spate of buying secondhand vessels but with a long line of newbuildings also due off the ramps.

Entering the top three ranking this year is European Commission president Ursula von der Leyen, heading what has been the single most important regulatory force in 2021.

Ms von der Leyen unveiled the commission’s historic Fit for 55 package, containing a number of proposals that could radically alter shipping emissions and decarbonisation politics for the sector.

Included in the landmark proposals is the first emissions trading system for international crossings, as well as a low greenhouse gas fuel standard for ship fuels, taxes on bunkers, and requirements on ports to electrify power supply.

Fit for 55 is the first concrete effort to reduce emissions using numerous market-based and technical measures over a long period, instead of short-term fixes with vague mechanisms.

In fourth place on the rankings ladder is the joint entry of Wan Min and Miao Jianmin, the head honchos at China Cosco and China Merchants, respectively.

China’s two state-backed giants slip down a place, with the jury still out when it comes to convincing colleagues and the shipping industry of their leadership credentials, though their sheer size and global influence warrants top five standing.

They are followed in fifth place by CMA CGM’s Saadé family, who jump up a rung on the ladder in recognition of rapidly evolving an integrated container transport provider while remaining committed to energy transition and digitalisation.

Meanwhile, Cargill’s Jan Dieleman, at sixth place, and Rasmus Bach Nielsen of Trafigura, at number 10, hold onto their ranking status in the upper tier as cargo interests continue to lead the zero-carbon debate.

Elsewhere in the top 10, Maria Angelicoussis, ranked at ninth position, occupies the place of her late father John Angelicoussis, who died earlier this year of a cardiac arrest, as she takes the reins of the world’s largest private shipping company, Angelicoussis Group.

Looking slightly further down the list, in the top 20, there are several familiar names, including shipping stalwarts the Grimaldi family and John Fredriksen. Talk of the latter’s retirement appears wide of the mark, with the shipping tycoon firmly back in the game.

In this year’s Top 100, there are as many as 22 new entries, welcoming not only a few familiar faces but also those at the forefront of technological innovation, regulatory response, and the industry’s decarbonisation efforts.

One such newcomer, occupying the final ranking position, is the editorial driving force behind the documentary that divided industry opinion and sparked an important debate in 2021, Black Trail.

No doubt its entry into our traditional end-of-year ranking of the industry’s greatest influencers will provoke further controversy.

This, though, is just a snapshot of the host of entries making a mark in shipping today, as part of a list that also has a habit of sparking its own debate in industry circles.

It is important to remember that Lloyd’s List’s One Hundred People is entirely subjective, though our editorial team has endeavoured to justify the reasoning behind each and every entrant.

Congratulations to all those who made the cut ― and for those who didn’t, maybe 2022 will be your year.