Two years into our brave new Covid-19 world, let’s hear it for shipping

Coronavirus will be with us for a long time yet. But our industry will keep world trade moving, and deserves massive credit for doing so

No one would describe the last two years as getting off lightly. But the ingenuity of humanity — aided in no small way by shipping’s tenacity — has averted the doomsday scenario 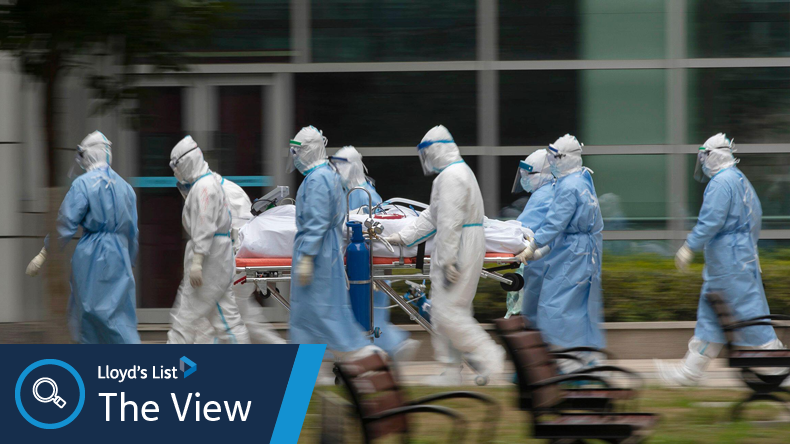 Source: Xinhua / Alamy Stock Photo An early Covid-19 victim in Wuhan: Shipping has distinguished itself enormously since November 2019, keeping the most essential commodities moving even in the darkest days.

IT IS now two years to the month since the first known outbreak of Covid-19 in Wuhan, China. The world is entitled to two cheers for the sheer determination of the fightback since.

Governments responded, admittedly with varying degrees of alacrity, by lockdowns of entire economies that are unprecedented in peacetime. Meanwhile, vaccinologists miraculously speeded up the normal development time for new drugs, and the jabs started rolling out by last December.

Comparisons with the Spanish Flu epidemic of 1918-20, the nearest equivalent pandemic in modern history, are instructive.

The death toll a century ago was at least 17m, and as high as 100m on some estimates. That compares to 6m from the current scourge. That latter figure will doubtless go higher, but nowhere near as high as the obvious historical comparator.

Clearly coronavirus will be with us for some time yet. Even on the day of writing, a fresh wave of infections had forced Austria back into full lockdown.

The reticence of the gullible to seek safe protection from life-threatening illness gives the virus the opportunity to retain its deadly foothold in the developed world, to everyone’s cost.

And of course, this is before we come to the developing world, where vaccination rates are often at low single-digit percentage points, largely because of lack of affordability. The case for suspending patents and getting as many needles into as many arms as soon as possible is a strong one.

Shipping has distinguished itself enormously since November 2019. While an immediate downturn in world trade inevitably arrived once the scale of the challenge from Covid was known, the most essential commodities kept moving even in the darkest days.

This is not to argue that virtue is its own reward; the subsequent rebound has made large sums for many shipowners.

Not everyone is experiencing such happy times. Covid-19 payouts have been a major factor in the spate of double-digit premium hikes that owners will foot the bill for in the coming renewal round.

But more than any of us, it is our seafarers who have faced the worst hardships. At one point, some 400,000 were stranded away from home, and that number remains considerable even now.

This week we reported that more than 8,000 foreign seafarers have so far received at least one jab in Singapore, with a further 12,500 in line for a first, second or booster shot before next June.

This is not before time, we have to add, and commend the stance of the Singaporean authorities to other jurisdictions.

Lloyd’s List has also covered publication of the United Nations Conference on Trade and Development’s annual Review of Maritime Transport.

So far, just over 40% of crews have been jabbed. But getting that total higher is a vital step for the security of the global supply chain, Unctad correctly urges.

Yet even at this stage, there is palpable optimism across shipping that the worst is behind us.

“There are going to be fewer Covid-related restrictions in 2022, compared to what we have seen this year,” Hapag-Lloyd chief executive Rolf Habben Jansen opined in our pages.

“That is definitely going to help. But I also believe people are going to start finding more solutions between them and become more creative in getting themselves out of this situation.”

We hope he is right. We hope next year’s Unctad report comes up with a far higher tally for seafarer vaccination. We hope the restrictions will indeed be fewer, the port congestion diminished.

No one would describe the last two years as getting off lightly, not least those who have endured their own bouts with coronavirus, sometimes losing their lives in the process.

But the ingenuity of humanity — aided in no small way by shipping’s tenacity — has averted the doomsday scenario of a repetition of Spanish flu.

The struggle is not over. But the fightback is continuing, and we have every confidence humanity will ultimately win.