A renewal of the existing dry bulker fleet is likely to take place over the course of 10 to 15 years, beginning as late as the 2030s, a shipbuilding report estimates

When considering fleet renewal, an important constraint for tramp trading vessels, such as dry bulkers and tankers, is the need to establish a global distribution network for zero-emission fuels. This will take time to materialise 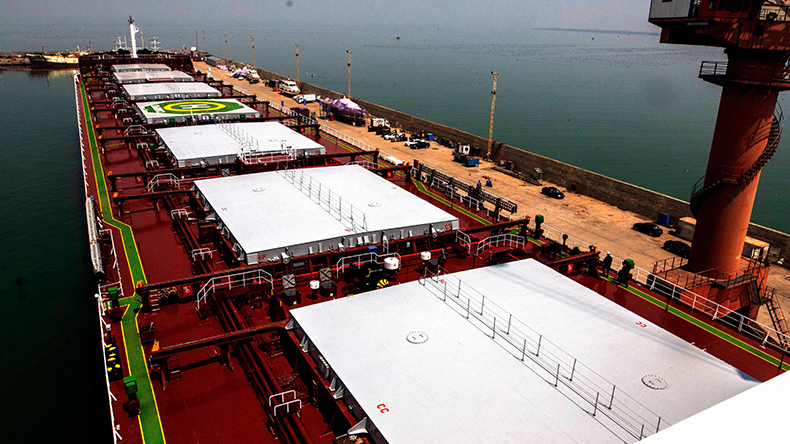 Source: Sipa US / Alamy Stock Photo The steady replacement of today’s dry bulk fleet will need to factor in shipyard capacity and a revamp of shipping’s fuel infrastructure.

REPLACING the current merchant fleet of 100,000 vessels with zero-emission tonnage may not be complete until the 2040s, according to Danish Ship Finance.

The lengthy process would have to factor in shipyard capacity and the progress in providing the necessary fuel infrastructure, the brokerage said in a report.

The speed of renewal will also vary in different vessel types, with some faster than the others owing to the nature of their trading patterns and the complexity of construction.

“For tramp trading vessels, the transition to zero-carbon fuels will require a global distribution network of the future fuels in question. Such a network is unlikely to be established in the short term.”

As a result of this backdrop, the renewal of dry bulker vessels, which are relatively easy to construct, “is likely to take place over the course of 10 to 15 years, beginning as late as the 2030s”.

Vessels mostly sailing on fixed schedule, such as certain large bulkers, containerships and car carriers, are seen as among the “early adopters”.

But the replacement will still take a relatively long period to accomplish.

“The container fleet could, in theory, be renewed in just five years, if all yards devoted their entire capacity to this segment,” Danish Ship Finance said.

The segment has about 5,500 vessels of 142m cgt against 94 yards of 39m cgt that have the required building experience.

In reality, however, not all of them can be used to build boxships as shipyards have become increasingly consolidated while at the same time specialised in producing certain kinds of vessels.

Accordingly, the brokerage expects the actual period to be extended to 10 to 15 years.

The company added that some segments, such as tankers and offshore supply vessels, might face a decline in demand for cargo as a result of the energy transition.

“These fleets may not be renewed completely,” it said.

COP26: An omen of what’s to come at shipping’s next climate showdown