Regulations to cut upstream emissions of natural gas, such as by plugging leaky pipes, could reduce the lifecycle emissions of ships that run on LNG fuel

Pledge to cut methane emissions 30% by 2030 could benefit LNG as ship fuel, according to its industry lobby group. But it could also add production costs 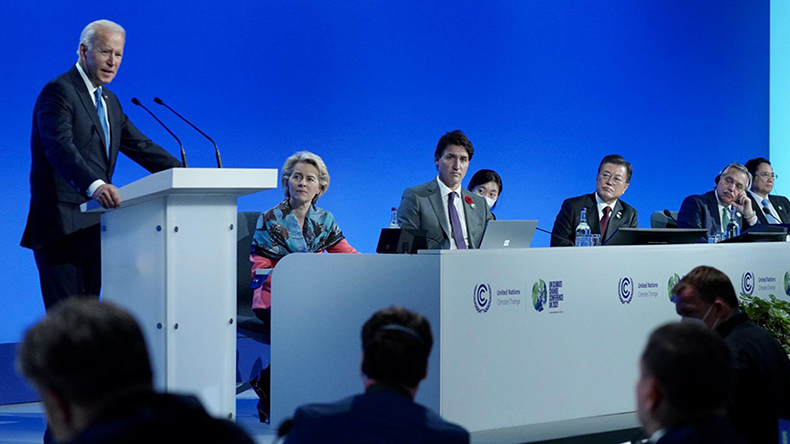 A PLEDGE by more than 100 countries at the COP26 climate summit to cut methane emissions could help liquefied natural gas as ship fuel, as pressure to regulate the greenhouse gas grows.

Signatories to the Global Methane Pledge will see countries seek to lower methane emissions by 30% on 2020 levels by 2030.

Ship emissions of methane rose 150% between 2012 and 2018, according to the International Maritime Organization’s fourth greenhouse gas study, as LNG combustion engines were adopted. Methane slip from those engines and its impact on the environment has been a hotly contested area of the green shipping fuel debate.

UCL Energy Institute Associate Professor Tristan Smith said the pledge could benefit LNG as ship fuel by helping reduce its upstream emissions, such as those from leaky pipes or the flaring of excess gas.

Dr Smith, a critic of LNG as ship fuel, said this should improve its well-to-wake emissions profile.

“But that would need investment in supply chains, and that investment will need to make a return before the switch to longer-run solutions causes them to become stranded assets.

“That return would likely need to be passed onto the end user of the fuel. So what is positive for the environmental case [for] LNG use may not be positive for its cost-competitiveness relative to other pathways available to the industry.”

Peter Keller, chairman of lobby group Sea-LNG, said the pledge was good news as it would provide impetus for stronger regulations of methane, giving the industry more certainty.

“This pledge is likely to lead to competition among suppliers to differentiate their LNG bunkers based on methane emission levels and further stimulate engine manufacturers, where methane slip remains an issue, to accelerate their technology developments to address it,” he said.

Mr Keller said methane slip represented a wasted resource for shipping. He said many of the measures to stop upstream emissions were costly but using satellite imagery to spot leaks was helping to change this.

He said well-to-tank emissions made up about 6% of LNG’s well-to-wake greenhouse gas emissions, citing the Sphera LNG lifecycle emissions study.

The pledge, which has the backing of the European Union and US, is non-binding and does not hold members to individual targets. Big emitters like China, Russia, and India have not signed up.

But methane regulations have long been on shipping’s horizon, with discussions at the IMO and the EU through the FuelEU Maritime proposal, to reduce carbon intensity of ship fuels.

Dr Smith said the pledge increased the likelihood of regulation targeting LNG ships with material methane slip - namely those with engines other than the MAN Energy Solutions ME-GI high-pressure two-stroke, which he said was the minority engine in the current fleet orderbook.

He said the trend of increasing methane emissions from ship operations noted in the IMO GHG study was likely to have continued since 2018 and would not be compatible with the 30% methane pledge if left unchecked.

“It may not make sense for a ship built in recent years, intended to be in service to 2050 with a machinery solution with significant methane slip, not to be regulated to control that methane emission and therefore require retrofit,” he said.

The Sphera LNG study said oxidation catalysts are in the research and development stage and not yet commercially available.

COP26: Denmark and the US call for zero shipping emissions by 2050

COP26 opens with call to collaborate on emissions cuts