Navios Partners is now an ‘all-weather model’ after swallowing group’s tanker arm and offers a proxy to 85% of global trade, according to chief executive 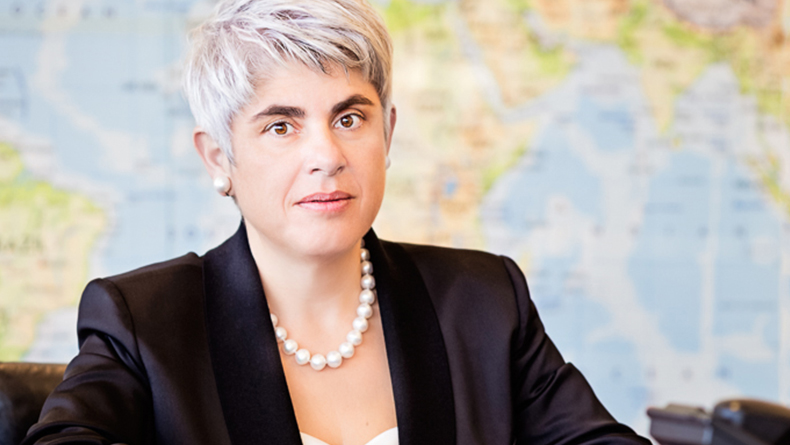 Frangou: We represent about 85% of global trade in the sectors that we are in.

The New York-listed partnership, which started out as a spin-off but is now the group’s flagship, completed its merger with tanker company Navios Maritime Acquisition last week.

The deal confirmed Navios Partners as the largest US-listed shipping company with a mixed fleet of 143 dry bulk carriers, tankers and containerships valued at well over $4bn.

With a fleet split approximately evenly between bulkers, tankers and boxships, the company now offered “the flexibility of an all-weather model,” Ms Frangou told a Marine Money conference in Athens.

Involvement across those sectors made Navios Partners an effective proxy for global trade and the global economy, she said.

“We represent about 85% of global trade in the sectors that we are in,” she said, adding there was interest in further extending the company’s coverage in terms of different trades but this was not the immediate focus and would be considered at an appropriate time.

“There are definitely sectors that we will enter. It is a matter of how we will transact and first we need to see how the tanker market plays. I think the tanker sector will do well but we have to wait and see.”

Gas shipping is probably the most obvious sector that Navios is not currently involved in, but there was no clarification of which particular markets were on Ms Frangou’s mind.

Also currently standing outside Navios Partners is the business of Navios Maritime Holdings that includes a dry bulk fleet but also port terminals and logistics in South America.

Ms Frangou said that the group had “learned from history” in its desire to bring the tanker fleet into the New York Stock Exchange-listed partnership, which followed the earlier absorption of Navios Containers.

Despite being beloved by many investors, single-sector shipping companies tended to “party” during the good markets but suffered “devastation and destruction” during market troughs, she argued.

The merger offered “the strength of scale and resilience of diversification” and brought significant advantages in both chartering and acquisition strategy.

Navios Partners, which owns 15 separate types of vessel across its three different market segments, and serves more than 10 end-markets, currently has a backlog of about $1.6bn in chartered revenue, mainly from its containership fleet.

However, Ms Frangou rejected the label of being a “conglomerate”, saying this denoted a collection of unrelated businesses that analysts found difficult to value.

Navios Partners was not that, but instead involved “the same [management] skill set, in the same industry with the same analysts.”

Capesizes near $60,000 per day as miners adjust iron ore output